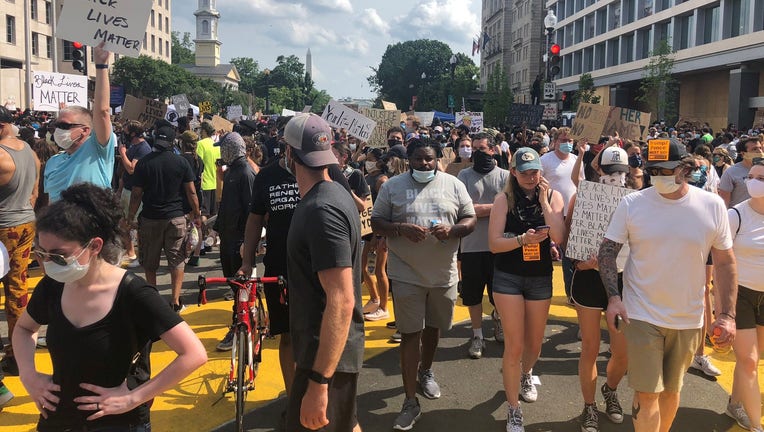 WASHINGTON - UPDATE (10:44 A.M.): A spokeswoman for the Metropolitan Police Department tells FOX 5 several hours after we asked that police did arrest one person after 10 p.m. Saturday for destruction of property and conspiracy to commit burglary.

Authorities estimate up to 200,000 activists filled the District's streets as the nationwide outrage following the death of George Floyd and other unarmed black people killed by police entered its 12th day.

Unlike prior protests highlighted by rioting -- or the president ordering troops to tear gas activists to make way for a photo opp -- Saturday's demonstration was marked by, if anything else, joy and celebration of black life.

RELATED: Protesters pour into DC for city's largest demonstration yet

Saturday's protest also included a new backdrop for the center of the demonstration: Black Lives Matter Plaza, a rechristened part of 16th St. NW with massive street art that can be seen from space.

Local Black Lives Matter activists added their own twist to the message: Defund The Police.

President Trump on Saturday night attempted to downplay Saturday's demonstration by saying the crowd was smaller than expected.

But if Saturday's protest was any indication, the Black Lives Matter movement is peaceful, and won't be losing momentum any time soon.