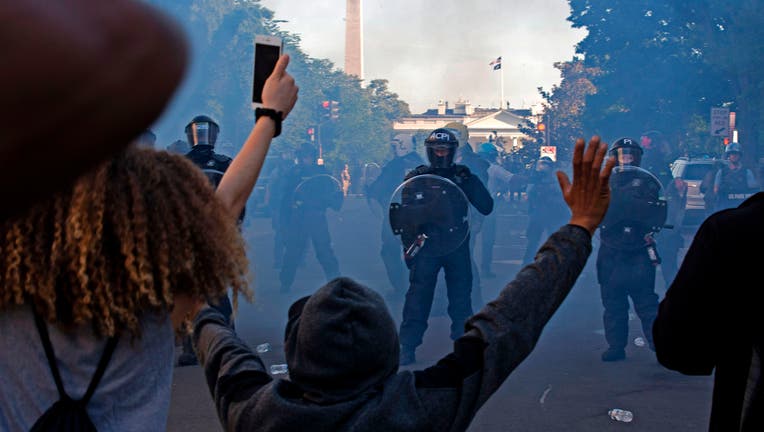 Police officers wearing riot gear push back demonstrators outside of the White House, June 1, 2020 in Washington D.C., during a protest over the death of George Floyd, an unarmed black man, who died after a police officer kneeled on his neck for seve

WASHINGTON - A U.S. Park Police spokesperson said Friday it was a “mistake” to insist in a statement Tuesday that no tear gas was used to clear Lafayette Park on Monday before President Trump walked across to visit St. John’s Church.

However, the spokesperson insisted that  Park Police did not lie, explicitly noting that pepper balls were shot. Pepper balls can cause irritation to the eyes and cause tears.

“I’m not going to say that pepper balls don’t irritate you,” Sgt. Eduardo Delgado told Vox. “I’m not saying it’s not a tear gas, but I’m just saying we use a pepper ball that shoots a powder.”

“The point is we admitted to using what we used,” Delgado said. “I think the term ‘tear gas’ doesn’t even matter anymore. It was a mistake on our part for using ‘tear gas’ because we just assumed people would think CS or CN,” two common forms of tear gas.

The original Park Police statement on Tuesday said  “no tear gas was used” when clearing a large group of protestors from the area. Officials said they took the steps “to curtail the violence that was underway,” pushing back against assertions that the protest was entirely peaceful from demonstrators and reporters on the scene.

“At approximately 6:33 pm, violent protestors on H Street NW began throwing projectiles including bricks, frozen water bottles and caustic liquids,” the Park Police said in a statement. “The protestors also climbed onto a historic building at the north end of Lafayette Park that was destroyed by arson days prior. Intelligence had revealed calls for violence against the police, and officers found caches of glass bottles, baseball bats and metal poles hidden along the street.”

Park Police said they used smoke canisters and pepper balls on the protesters.

“As many of the protestors became more combative, continued to throw projectiles, and attempted to grab officers’ weapons, officers then employed the use of smoke canisters and pepper balls when protestors did scatter from the area," the statement said.

The Secret Service also asserted Thursday that “no agency personnel” used tear gas or capsicum spray during the clearing of Lafayette Park.

An updated statement on the Park Police website says “officers and other assisting law enforcement partners did not use tear gas or OC Skat Shells to close the area at Lafayette Park.”

Delgado said Park Police felt it was right to say tear gas wasn’t used in its Tuesday statement is because they were referring solely to the employment of CN and CS gases, which the Centers for Disease Control and Prevention labels the “most common” forms of tear gases. The CDC, which also uses the term “riot control agent” for tear gases, also says that “pepper spray” is considered a “riot control agent.”

Meanwhile, Attorney General Bill Barr countered earlier reports, saying he did not give the command to disperse the crowd, though he supported the decision.

White House spokeswoman Kayleigh McEnany told reporters it was Barr who made the decision to push back the security perimeter outside the White House on Monday morning. McEnany said that when Barr arrived at Lafayette Park later that day to survey the security situation, he was surprised to see that action had not yet been taken.

The order was executed Monday evening just minutes before the president gave a public address on the nationwide unrest following the death of George Floyd, an unarmed black man who was being detained by white officers in Minneapolis.

The act to clear the park -- which came shortly before a city curfew went into effect -- has sparked outrage from critics who claim protesters were moved so the president could participate in a photo opportunity.