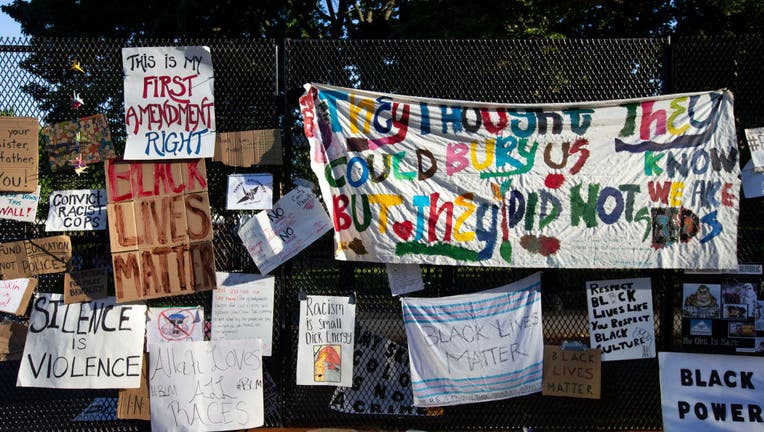 Banners and signs are hung on a fence at Lafayette Square near the White House, during ongoing protests against police brutality and racism, on June 7, 2020 in Washington, DC (Photo by JOSE LUIS MAGANA/AFP via Getty Images)

WASHINGTON (AP) - The Trump administration appears to be retreating from its commitment to quickly remove most of a new fence blocking demonstrators and other members of the public from in front of the White House.

Instead, National Park Service spokeswoman Katie Liming says only that her agency is in “continuing discussions” with the Secret Service about what Liming called the temporary security fencing at the front of the White House.

Officials abruptly erected the high, black metal fence last week to block demonstrators from Lafayette Square outside the White House. That was as massive crowds rallied in Washington and around the country to protest the killing of George Floyd in police custody, and other deaths of African Americans at the hands of police.

Members of the park service's U.S. Park Police and other security forces lobbed chemical agents and punched and clubbed demonstrators and journalists in clearing Lafayette Square near the White House on June 1, just before crews raised the new fence. Trump administration officials have denied federal forces at the time of the forceful removal of crowds were making way for President Donald Trump to stage photos nearby.

Lafayette Square has historically been one of the country's most prominent spots for demonstrations and other public advocacy,

Liming had said at the start of this week that officials would remove “most” of the fence at Lafayette Square on Wednesday.

Liming in her latest update, however, said only that fencing elsewhere, on the south side of the White House, would be removed “on or about” Wednesday.

She did not immediately respond to a question about why the Park Service now appeared to be moving away from its commitment to take down most of the Lafayette Square fence Wednesday.

Separately, three Democratic lawmakers asked federal watchdogs to investigate whether the Park Police broke any laws in routing demonstrators from the square.

The request was made in a letter, released Tuesday, to the Interior Department inspector general, Mark Lee Greenblatt, whose department oversees the National Park Service. Officials were in the early stages of reviewing the request, IG spokeswoman Nancy DiPaolo said.

The request for an investigation was made by Sen. Ron Wyden of Oregon, House Natural Resources Committee Chair Raul Grijalva of Arizona, and Committee Vice Chair Rep. Debra Haaland of New Mexico.

“The First Amendment rights to free speech, peaceful assembly, and free press are the building blocks of all other rights,” the three lawmakers said. “Any actions by the Park Police to muzzle these rights is an affront to all Americans and should be swiftly addressed.”

A force of several hundred officers, the Park Police are charged with law enforcement at Lafayette Square, the Statue of Liberty in New York, and a small number of other heavily visited federal sites.

An Interior Department spokesman, Conner Swanson, called the lawmakers' accusations “an insult to the fine men and women who put their lives on the line to protect our citizens and defend America's national treasures.”

“The suggestion that the United States Park Police would ‘muzzle’ Americans’ rights is outrageous," Swanson said.

Interior Secretary David Bernhardt told Grijalva in a letter last week that the Park Police had been in a “state of siege” from violent attacks in the square.

Democratic lawmakers say witness and journalist accounts and photos and videos made public so far don’t support allegations of that scale of protester violence.

The three lawmakers’ letter, sent Monday, asks Interior’s internal watchdog whether the force used by Park Police was lawful and in line with rules, policies and training standards for the force.

Lawmakers also asked the investigators to determine who was giving orders to the Interior Department in the square’s clearing.