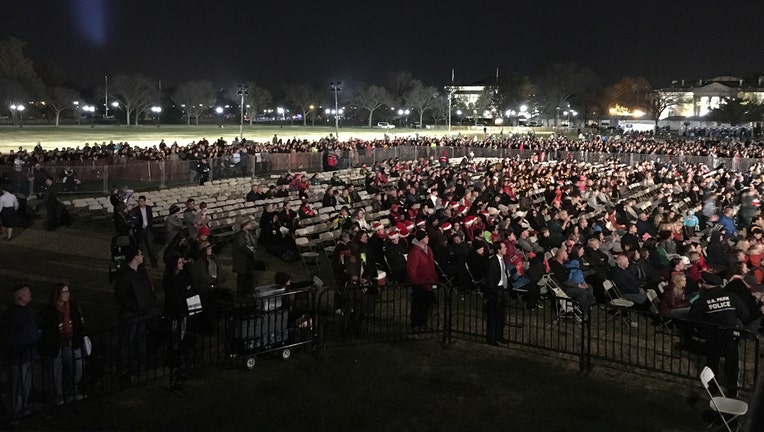 WASHINGTON - President Donald Trump and first lady Melania Trump continued the tradition of lighting the National Christmas Tree on Thursday. While a viral photo posted and shared on social media shows many empty chairs in the crowd during this year's event, the image may be a bit misleading.

The National Christmas Tree Lighting Ceremony is normally one of the hottest tickets during the holiday season as 20,000 free tickets for the event are given out. People are selected by entering through a nationwide lottery online and by phone.

FOX 5 asked the National Park Service about the empty chairs and they explained that no-shows are not uncommon for the National Christmas Tree Lighting. Since tickets are handed out to people around the country, there are many who are selected that do not live in the nation's capital and in the D.C. region, and this is believed to contribute to people not showing up for the event.

Of the 20,000 tickets given out, it is believed on average that 12,000 to 15,000 people attend the tree lighting ceremony each year, according to the National Park Service.

While there are empty chairs seen in the back of the audience this year, you can still see many attendees in the standing room section behind them. The following photo was taken by FOX 5's Lauren DeMarco during this year's event.

In 2015 while President Barack Obama was in office, there were plenty of empty seats seen at the National Christmas Tree Lighting that year as well.

This year was the 95th edition of this annual event, which was held at President's Park outside of the White House. The event dates back to 1923 when President Calvin Coolidge lit the first tree on Christmas Eve in front of 3,000 people on the Ellipse. The tree lighting ceremony has continued on ever since.

For those who did decide to attend this year, it was a pleasant night weather-wise.

"I was informed tonight that the weather we have is the best it's been in 25 years," Trump said. "In fact, I said, 'Is it always like this?' The secretary said it hasn't been like this for a long time, so we are very lucky."

This year's ceremony was hosted by Kathie Lee Gifford and Dean Cain and included musical performances from The Beach Boys, Wynonna and the U.S. Navy Band.