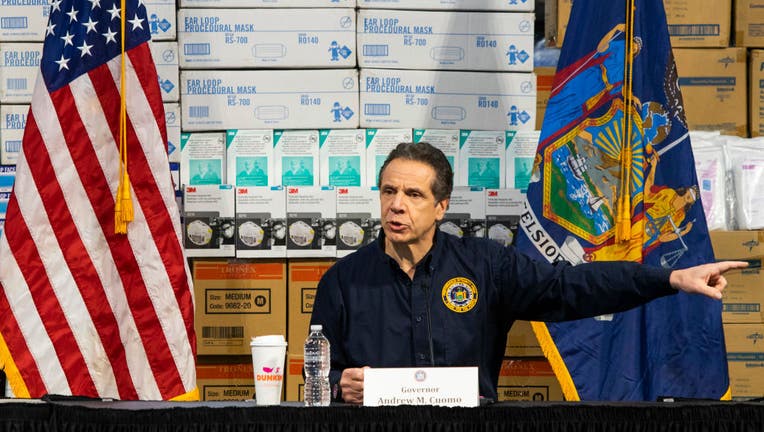 New York Gov. Andrew Cuomo speaks to the media at the Javits Convention Center which is being turned into a hospital to help fight coronavirus cases on March 24, 2020 in New York City. New York City has about a third of the nation’s confirmed coronav (Photo by Eduardo Munoz Alvarez/Getty Images)

Cuomo said New York also experienced a slight drop in intensive care admissions and the number of patients who need breathing tubes inserted. The hospital discharge rate is "way up" he said, calling it "great news."

“You could argue that you are seeing a plateauing,” Cuomo told reporters on Sunday, as he revealed that the state had reported 594 new coronavirus deaths -- down from the 630 reported on Saturday and the 562 on Friday. At least 4,159 people have died in the state so far, with approximately 122,000 total positive cases.

Pressed on whether the state was at an apex of coronavirus fatalities, Cuomo emphasized that he can't be sure.

"The statisticians will not give you a straight answer on anything," he responded. "At first, it was straight up and straight down, or a total V. Or maybe it's up with a plateau and we're somewhere on the plateau. They don't know."

"The number of beds doesn’t really matter anymore," Cuomo went on. "We have the beds. It’s the ventilators, and then it’s the staff."

Separately, the military said in a statement that the 1,000 personnel would work in support of the Federal Emergency Management Agency (FEMA). A total of 300 of these "uniformed medical providers will work from the Javits Center and the rest will deploy to other area locations to expand local medical capabilities in the war against COVID-19," U.S. Northern Command, which is leading coronavirus efforts for the Department of Defense, said.

Americans were bracing for what the nation's top doctor warned Sunday would be “the hardest and saddest week” of their lives while Britain assumed the unwelcome mantle of deadliest coronavirus hotspot in Europe after a record 24-hour jump in deaths that surpassed even hard-hit Italy.

"This is going to be our Pearl Harbor moment, our 9/11 moment,’’ U.S. Surgeon General Jerome Adams told “Fox News Sunday.”

Efforts to combat the virus have been stepped up around the world.

In France, heat-seeking drones have been whizzing over Fontainebleau forest to identify rule-breakers after the former royal estate in the Paris suburbs was closed to the public. That high-tech measure has been coupled with more traditional police patrols on horseback and roadblocks that turn back the cars of those seeking to escape urban areas.

In Sweden, authorities have advised the public to practice social distancing, but schools, bars, and restaurants are still open.

At the Vatican, Pope Francis celebrated Mass and blessed palms for Palm Sunday in a near-empty St. Peter’s Basilica. Usually tens of thousands of faithful would have crowded the square outside to attend a papal Mass.

Holy Thursday and Easter services will be held the same way. In the pope's native Argentina, the faithful were using plants at home for a “virtual” blessing during a live stream of the Palm Sunday service.

Worldwide, more than 1.2 million people have been confirmed infected and more than 65,000 have died, according to Johns Hopkins University. The true numbers are certainly much higher, due to limited testing, different ways nations count the dead and deliberate under-reporting by some governments.

Almost 250,000 people have recovered from the virus, which is spread by microscopic droplets from coughs or sneezes. The virus causes mild to moderate symptoms in most but for some, especially older adults and the infirm, it can cause pneumonia and lead to death. The World Health Organization says 95 percent of the known coronavirus deaths in Europe have been in people over 60.

Fox News' Kelly Burke and The Associated Press contributed to this report.