Dialysis patient Brian Pinker, 82, was the first to get the new vaccine shot, administered by the chief nurse at Oxford University Hospital. (Credit: OUH via Storyful)

LONDON (AP) - Prime Minister Boris Johnson announced on Monday a new national lockdown for England until at least mid-February to combat a fast-spreading new variant of the coronavirus, even as Britain ramped up its vaccination program by becoming the first nation to start using the shot developed by Oxford University and drugmaker AstraZeneca.

Johnson said people must stay at home again, as they were ordered to do so in the first wave of the pandemic in March, this time because the new virus variant was spreading in a "frustrating and alarming" way.

"As I speak to you tonight, our hospitals are under more pressure from COVID than at any time since the start of the pandemic," he said.

Under the new rules, which are set to come into effect as soon as possible, primary and secondary schools and colleges will be closed for face to face learning except for the children of key workers. University students will not be returning until at least mid-February.

All nonessential shops and personal care services like hairdressers will be closed, and restaurants can only operate takeout services.

As of Monday, there were 26,626 COVID patients in hospitals in England, an increase of more than 30% from a week ago. That is 40% above the highest level of the first wave in the spring.

The U.K. has seen an alarming surge in coronavirus cases in recent weeks as public health officials struggle to control the spread of a new variant of COVID-19 that is more contagious than previous variants. Authorities have recorded more than 50,000 new infections a day since passing that milestone for the first time on Dec. 29. On Monday, they reported 407 virus-related deaths to push the confirmed death toll total to 75,431, one of the worst in Europe.

The U.K.'s chief medical officers warned that without further action, "there is a material risk of the National Health Service in several areas being overwhelmed over the next 21 days."

Hours earlier, Scottish leader Nicola Sturgeon also imposed a lockdown in her nation until the end of January. 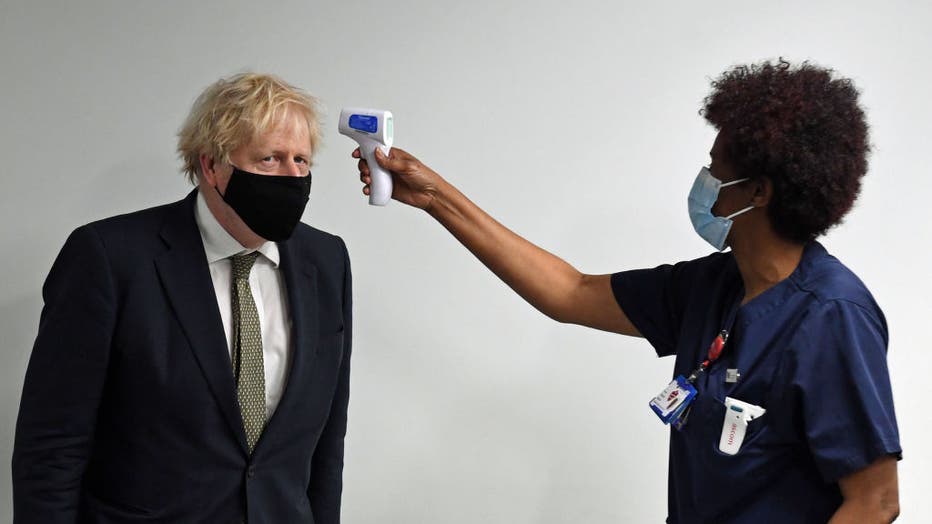 Prime Minister Boris Johnson has his temperature checked during a visit to Chase Farm Hospital on the day that the NHS ramps up its vaccination programme with 530,000 doses of the newly approved Oxford/AstraZeneca Covid-19 vaccine jab available for r

Beginning Tuesday, people in Scotland will be required to stay at home except for essential reasons, to help ease the pressure on hospitals and intensive care units, Sturgeon said. Under the new rules, people can go out for exercise but can only meet one person from another household. Schools will remain closed until February, except for children of key workers and those in social care.

"I am more concerned about the situation we face now than I have been at any time since March last year," Sturgeon said in Edinburgh.

Scotland, which controls its own health policy under the U.K.'s system of devolved government, has often imposed stricter coronavirus restrictions than those in England.

The announcements come on the day U.K. health authorities began putting the Oxford-AstraZeneca vaccine into arms around the country, fueling hopes that life may begin returning to normal by the spring.

Britain has secured the rights to 100 million doses of the Oxford-AstraZeneca vaccine, which is cheaper and easier to use than some of its rivals. In particular, it doesn’t require the super-cold storage needed for the Pfizer vaccine.

The new vaccine will be administered at a small number of hospitals for the first few days so authorities can watch out for any adverse reactions. But the NHS said hundreds of new vaccination sites — including local doctors’ offices — will open later this week, joining the more than 700 vaccination sites already in operation.

A "massive ramp-up operation" is now underway in the vaccination program, Johnson said.

But aspects of Britain’s vaccination plan have spurred controversy.

Both vaccines require two shots, and Pfizer had recommended that the second dose be given within 21 days of the first. But the U.K.’s Joint Committee on Vaccination and Immunization said authorities should give the first vaccine dose to as many people as possible, rather than setting aside shots to ensure others receive two doses. It has stretched out the time between the doses from 21 days to within 12 weeks.

While two doses are required to fully protect against COVID-19, both vaccines provide high levels of protection after the first dose, the committee said. Making the first dose the priority will "maximize benefits from the vaccination program in the short term," it said.

Stephen Evans, a professor of pharmacoepidemiology at the London School of Hygiene & Tropical Medicine, said policymakers are being forced to balance the potential risks of this change against the benefits in the middle of a deadly pandemic.

"We have a crisis situation in the UK with a new variant spreading rapidly, and as has become clear to everyone during 2020, delays cost lives," Evans said. "When resources of doses and people to vaccinate are limited, then vaccinating more people with potentially less efficacy is demonstrably better than a fuller efficacy in only half."

In England alone, 24,957 people were in hospitals with COVID-19 on Sunday. While figures for Northern Ireland, Scotland and Wales haven’t been updated in recent days, that’s higher than the U.K.-wide peak during the first wave of the pandemic.

The government closed non-essential shops across London and parts of southeast England before Christmas to try to contain the new variant, but health officials say tougher measures are now needed.

Johnson said there were "tough, tough" weeks to come in the fight against COVID-19.

While schools in London are already closed due to high infection rates in the capital, students in many parts of the country were returning to in-person classes Monday after the Christmas holidays. Unions representing teachers, however, have called for schools throughout England to remain closed for at least two weeks, with classes shifted to remote learning.

But with vaccination, there is hope. Brian Pinker, an 82-year-old dialysis patient, received the first Oxford-AstraZeneca shot at 7:30 a.m. at Oxford University Hospital.

"The nurses, doctors and staff today have all been brilliant, and I can now really look forward to celebrating my 48th wedding anniversary with my wife, Shirley, later this year," Pinker said in a statement released by the National Health Service.