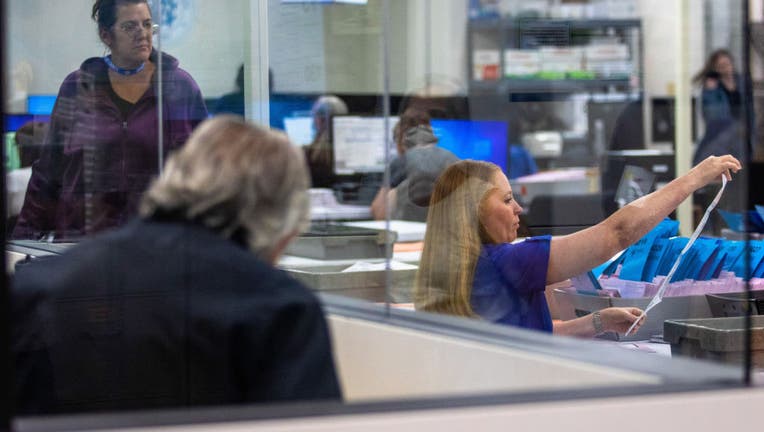 LAS VEGAS (AP) - As parts of rural Nevada plan to count ballots by hand amid misinformation about voting machines, the Nevada secretary of state’s office on Friday approved regulations for counties to hand count votes starting as soon as this fall’s midterm elections.

But the revised regulations will no longer apply to the one county that has been at the forefront of the drive to count by hand.

That’s because Nye County, in the desert between Las Vegas and Reno, will also use a parallel tabulation process alongside its hand count, using the same machines that are typically used to count mail-in ballots. All ballots in Nye County will resemble mail-in ballots, interim Nye County Clerk Mark Kampf said in an interview earlier this month.

Jan. 6 hearing: Trump didn’t want to say ‘election is over’ | LiveNOW from FOX

The House Jan. 6 committee has aired a previously unseen video outtake of President Donald Trump saying, "I don’t want to say the election is over" the day after insurrection at the U.S. Capitol. The committee showed outtakes from a speech that Trump recorded on Jan. 7, 2021, in which he resisted the idea of saying that the election is over.

The long-time Nye County clerk resigned in July after election conspiracies led to a successful push to hand count votes.

Kampf, her replacement, has falsely claimed that former President Donald Trump won the 2020 election. He has vowed to bring hand counting to the rural county of about 50,000, alongside the parallel tabulation process using machines.

The Nevada secretary of state’s office changed the hand counting regulations after Kampf and others criticized them during an Aug. 12 feedback session. The state officials changed the definition of "hand count" to apply only when it is the only method of counting ballots.

The rules require bipartisan teams of at least four people to count the votes, mandate spacing between tables and require room for observers, among many other provisions. State officials originally said the teams could count batches of 20 votes at a time but increased the number to 50. Kampf had criticized the lower number of votes per batch, saying it would be more efficient for the teams to count 50-vote batches.

Three Trump-era Justice Department officials recounted persistent badgering from the former president, including day after day of directives to chase baseless allegations that the election won by Democrat Joe Biden had been stolen.

"I think this represents a good partnership with the secretary of state’s office in refining these procedures," Kampf said Friday.

The regulations take effect Oct. 1 and will last until November 2023, though officials hope to adopt them permanently.

Several showed up on Friday to again speak against the changes.

Voting rights attorney Sadmira Ramic of ACLU’s Nevada chapter called adopting the regulations "a slippery slope that will have dire consequences for the state," creating more room for election errors and tampering.

"The secretary of state’s office, by passing these regulations, is condoning the use of hand counting while ignoring the urgency of the issues that such procedures will produce," she said.

She also criticized a lack of enforcement or consequences for counties that don’t follow the rules.

Deputy Secretary for Elections Mark Wlaschin previously acknowledged in an interview earlier this month that there is no enforcement mechanism outlined in the regulations.

During the Jan. 6 investigation hearing, officials played testimony of a call between President Trump and VP Mike Pence on January 6, 2021. The call allegedly became heated, with President Trump lashing out at Pence.

He said his office has considered "a number of contingencies" for noncompliance. Part of ensuring compliance falls on the secretary of state’s office, he said, and part of that role falls on county clerks.

Hand counting supporters have described the old-fashioned method as a way to address distrust in elections, especially unproven claims that voting machines are prone to hacking and are untrustworthy. Experts have said hand-counting is far more time consuming and exposes the process to more errors.

Wlaschin has said the rules will help counties that opt to switch to hand-counting systems, preventing clerks from having to draw up rules from scratch. They would also create a uniform structure so the state can ensure the counting is valid.

But questions remain about the implementation of the regulations and how they will unfold in counties that vary in population, size and differing political leanings.

Humboldt County Clerk Tami Rae Spero said in an interview it would be difficult to follow the guidelines that require finding bipartisan vote counters and the physical space that will be needed for observation of the hand counts.

At a hearing earlier this month, Wlaschin asked Kampf if Nye County planned to eventually phase out the parallel tabulation process, leading to an all-hand count.

Kampf responded: "I hope we can prove to you and to those who are doubting and have significant doubts that it can work, that you’d make that decision at that point in time."

Some Nevada state lawmakers will discuss next week whether to rein in efforts by rural counties to count votes by hand.

At an interim legislation session Monday for the committee on legislative operations and elections, lawmakers are scheduled to deliberate whether to draft a bill requiring counties that discontinue using voting machines to return state funds given to them for the machines.

The bill would not be voted on until at least February, when Nevada’s next legislative session begins.

The hearing for the hand counting regulations on Friday came as several Nevada Republicans in key races have repeatedly questioned the results of the 2020 election without evidence.

Republican secretary of state candidate Jim Marchant has made election distrust central to his platform and has repeatedly denied the results of the 2020 election.

In February, he told voters that "your vote hasn’t counted in decades."

He also worked with Kampf to design the hand-counting plan in Nye County and hopes to spread it across the country.

Stern is a corps member for the Associated Press/Report for America Statehouse News Initiative. Report for America is a nonprofit national service program that places journalists in local newsrooms to report on undercovered issues.