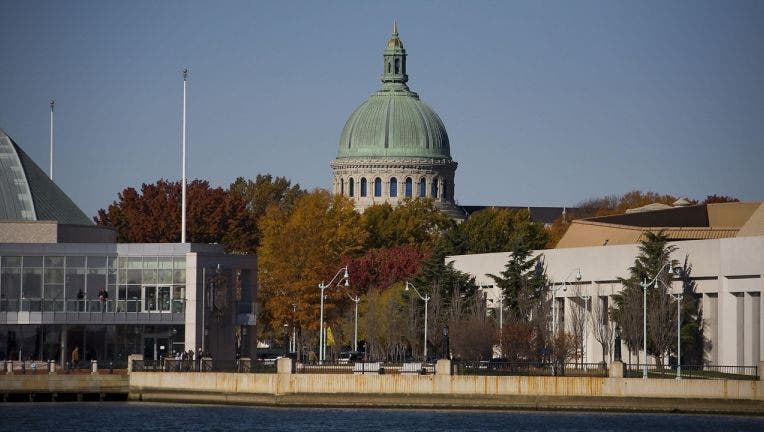 The campus of US Naval Academy is seen in Annapolis, Maryland. (Photo credit: JIM WATSON/AFP via Getty Images)

ANNAPOLIS, Md. - Nearly 100 Naval Academy midshipmen are recovering from COVID-19 at a hotel in downtown Annapolis after a surge in cases on campus.

According to the Academy, they moved the midshipmen in an effort to provide more quarantine space at the Bancroft Hall dormitory.

The academy has implemented severe restrictions – which they call "full restriction of movement," or ROM – in an effort to combat the outbreak.

Naval officials declined to tell the Associated Press how many cases were associated with the Academy, citing "operational security."

However, Cmdr. Alana Gras said that cases doubled between Friday and Sunday.

The increase began around Feb. 18 and continued to accelerate.

She said that Valentine’s Day weekend is likely one of the reasons behind the increase in cases.

The navy says it selected the Hilton Garden Inn in Annapolis because of its COVID-19 protocols.