In Montgomery County, $1.25 million is now going to 'winterize' the county’s 'streeteries.'

SILVER SPRING, Md. (FOX 5 DC) - The Montgomery County Council on Tuesday unanimously passed a special appropriation that will provide over a million dollars to winterize the county’s streeteries as business owners fear more trouble moving into the winter months with tightening pandemic restrictions in place.

Is this the best use of that money?

FOX 5 found very different answers to this question talking to people in Silver Spring and in Bethesda about the county’s streetery program.

“I think that’s a terrible idea,” said Petros Kontos, “… hardly anybody sitting outside. The other thing is we had a lot of customer complaints that basically we cannot find parking.”

Kontos is the store manager of The Big Greek Café on Georgia Ave. He told FOX 5 the “StreetDINE” area blocked-off along Georgia in Silver Spring actually slowed business for them. When asked about a winterized streetery, Kontos didn’t think customers would want to sit outside in 30 and 40-degree weather either.

“I’m not interested. One for one thing, I’m not sitting outside in the cold,” said a woman walking by, who told FOX 5 her ethnicity is more susceptible to contracting Coronavirus.

FOX 5 also found Chef “JR” Robinson of  “Kitchencray” in the Silver Spring area. He says he did receive a D.C. winterization grant.

“It’s hard to serve hot food under 40-degrees so I there’s going to be, I feel like there’s going to be a lot of complaints,” said Robinson, who also added that more direct funding would help, especially when capacity drops to 25% but the utility bills are still 100% due.

READ MORE: Montgomery County limits gatherings to 10; requires masks inside and outside

Brandon Draghizi who is a store manager with “Joe & the Juice”. Draghizi told FOX 5 the streetery brought more foot traffic into their business.

“In terms of winterizing it, it’s really nice for us. We don’t have our own heateries and people consistently ask to sit outside,” he said.

“I think they’re doing the best they can. Little igloos over there. I love it. If we can’t go inside, we’ll go outside,” said a young couple, telling FOX 5 they would patron winterized areas, even in freezing temperatures. Both in Silver Spring and in Bethesda, more younger people than older, voiced they would patron restaurants in winterized areas during freezing temperatures outside. 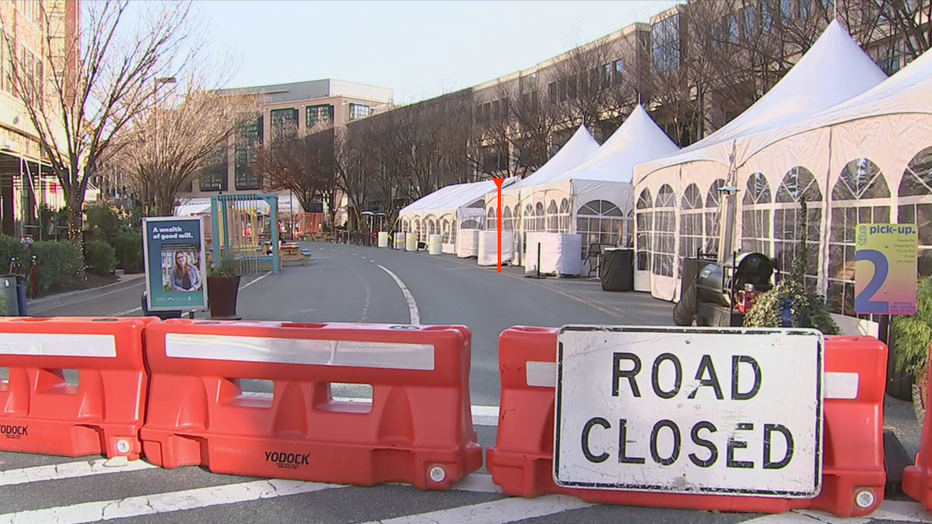 However, an older couple in Bethesda told FOX 5, “The question that I’m not sure is whether that’s satisfy for those who do not like to be outdoor sin the restaurant.”

We’re told the intent is to “provide broader assistance for a larger number of nearby local businesses, instead of smaller grants for each business,” which Councilmember Andrew Friedson said the county has already done.

He listed some of those efforts in an interview with FOX 5 DC, including the Reopen Montgomery Program and the Restaurant Relief Grant, which offered $10,000 to restaurants. With at least two more grant programs named, those with the county tell FOX 5 Montgomery County has already appropriated $76.2 million in direct support to restaurants and small businesses.

“Is this going to solve the problems? Absolutely not,” said Councilmember Friedson, “Has this been a lifesaver for a number of businesses to provide them a sense of relief, to provide residents with some sense of normalcy and placemaking and an opportunity to safely support those businesses? Absolutely.”

A suggested amendment passed, moves the $1.25 million from being pulled from CARES Act funding to now coming from the county’s general fund reserves, so that funds can be used into the 2021 year.

No one signed up to speak in favor of or against the special appropriation at Tuesday’s virtual hearing.

“I think that it’s important to realize that that money is not going directly to restaurants in any way shape or form,” said Marshall Weston with the Restaurant Association of Maryland.

On Tuesday, the Restaurant Association of Maryland issued a new survey done by the association that finds 89% of Maryland operators expect sales to drop in the next three months. Weston says the national average is 65%.