A video posted on Aug. 31, 2021, shows a police officer coming to the aid of two women who became stranded in a car surrounded by floodwater in Pascagoula, Mississippi. Credit - Pascagoula Police Department via Storyful

PASCAGOULA, Miss. - Police bodycam footage shows officers in Mississippi coming to the rescue of two women who were stranded in a car submerged in floodwaters following Hurricane Ida.

Officers in Pascagoula, Mississippi, responded this week to the vehicle after flash flooding hit the area. Video posted on Tuesday shows one of the officers, identified as Officer Collier, pulling the two women to safety through the car windows with the assistance of another responder identified as Sgt. Murphy.

"C’mon! Climb out of the window," the officer can be heard telling the woman while standing on the hood of the vehicle.

The officers then are seen helping the women wade through the floodwaters to safety.

The Pascagoula Police Department thanked the officers for their "dedication to serve and protect our citizens." 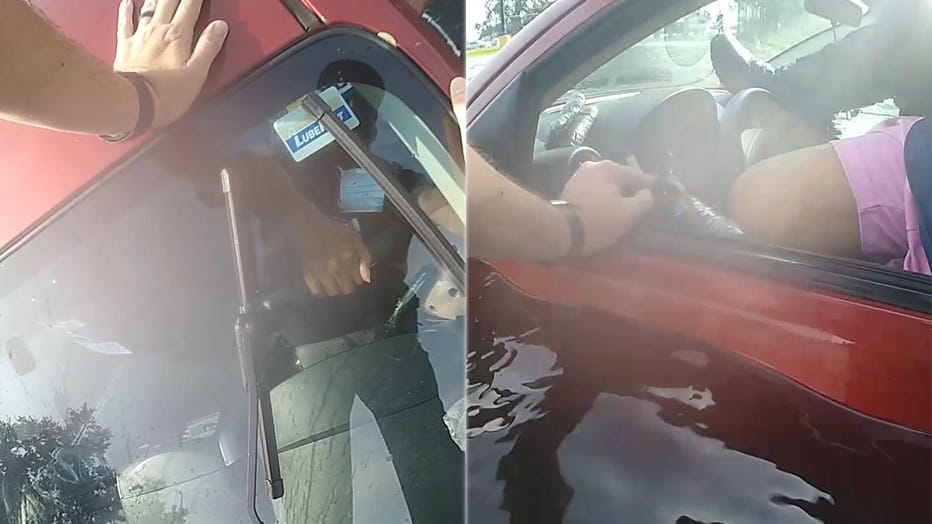 Screengrabs from a video posted on Aug. 31, 2021, shows a police officer coming to the aid of two women who became stranded in a car surrounded by floodwater in Pascagoula, Mississippi. (Credit: Pascagoula Police Department via Storyful)

Hurricane Ida was the fifth most powerful storm to strike the U.S. when it hit Louisiana on Sunday with maximum winds of 150 mph. It caused massive flooding and structural damage to many areas in the region. More than 1 million homes and businesses across Louisiana and Mississippi were also left without power when the storm slammed the electric grid.

RELATED: Ida's aftermath: 1st lights turned back on in New Orleans as many wait for relief

The number of deaths from the hurricane has climbed to at least five, though Louisiana Gov. John Bel Edwards said he expects the death toll to rise.

The dead included two people killed Monday night seven vehicles plunged into a 20-foot-deep hole near Lucedale, Mississippi, where a highway had collapsed after torrential rains. Among them was construction worker Kent Brown, a "well-liked" 49-year-old father of two, his brother Keith Brown said.

RELATED: How to help victims of Hurricane Ida