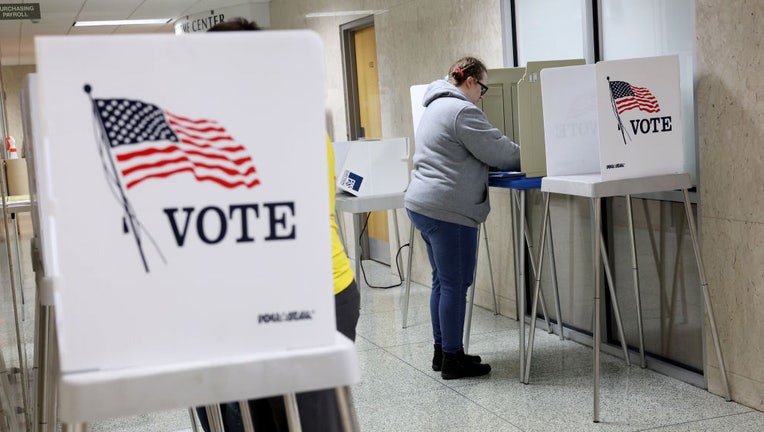 After months of primaries, campaign events and fundraising pleas, the midterm elections that will determine the balance of power in Washington and state capitals are finally here.

Republicans are predicting a massive red wave as anxious Democrats defend their narrow majorities in Congress while struggling to overcome pervasive concerns about the economy, crime and President Joe Biden’s leadership. Democrats are hoping that a backlash against the Supreme Court's reversal of Roe v. Wade will save them.

The political environment has led to an unusually large playing field as emboldened Republicans press into Democratic strongholds like New York, California, New Mexico and Washington state. Still, the marquee races are taking place in swing states like Arizona, Georgia, Nevada, Pennsylvania and Wisconsin, all of which could help determine the outcome of the 2024 presidential contest.

Because of close contests and extended vote counting, it could take days or weeks before the final outcome is known in several key races.

What we're watching on Election Day:

All signs point to Republicans making significant gains on Tuesday. But whether it's a red ripple or a tsunami remains to be seen.

Voters are overwhelmingly pessimistic about the direction of the country as inflation surges and political divisions explode. And history suggests that voters will take out their frustrations on the party in power.

The party that occupies the White House has suffered significant losses in nearly every president’s first midterm election for more than a century. Exceptions were in 1934 during the Great Depression; in 1998 during the effort to impeach Bill Clinton; and in 2002 after the Sept. 11 terrorist attacks.

RELATED: Biden urges voters to save American democracy from lies and violence

Democrats were initially hopeful that the Supreme Court's decision to eliminate abortion rights might be enough to disrupt historical trends — or at least limit their losses — but party leaders have turned increasingly concerned as Election Day approached.

Operatives in both parties expect the GOP to win the House majority, which would require a net gain of five seats. But with a big wave, the GOP could win 25 new seats or more. Sensing opportunity, Republican groups invested millions of dollars in Democratic-leaning districts in California, New York, Illinois and Pennsylvania in the election's final days.

The fight for the Senate majority is more competitive. If Republicans pick up even one seat, they would control the Senate's upper chamber.

Democrats are fighting to protect vulnerable incumbents in Arizona, Georgia, Nevada and New Hampshire, while Republicans believe they're within striking distance in Colorado and Washington state. The GOP chances are hampered somewhat by flawed candidates in Arizona, Georgia and New Hampshire, who have been boosted by former President Donald Trump.

At the same time, races for governor and statewide officers like secretary of state loom larger than normal. The political environment is giving Republicans confidence in gubernatorial races in blue states like Oregon and New Mexico.

Should a massive red wave materialize, Democrats may struggle everywhere.

After the Supreme Court eliminated Roe v. Wade in June, Republicans, including Trump, worried aloud that the decision might trigger a backlash against GOP candidates who oppose abortion rights. And there have been signs in recent months that voters — suburban women and younger voters, in particular — were energized and ready to vote for Democrats on Nov. 8.

But more than four months after the ruling, the abortion effect may be fading.

RELATED: 2022 Midterm Elections: When you can expect to learn the results

Democratic candidates have shifted their message away from abortion in recent weeks, at least somewhat, in favor of the economy, Social Security and Medicare. And some elected officials, including Vermont Sen. Bernie Sanders, an independent, warned that Democrats have relied too much on abortion rights as a galvanizing issue.

The issue is especially critical in the push for suburban women, a group that swung against Trump's GOP in 2020 and seemed to swing back after Trump left office when the GOP shifted its focus to pandemic restrictions and the economy.

Democrats sought to improve their outreach to Latinos after underperforming with the group in 2020. But there are reasons to believe that Democrats may do even worse this year among the key voting bloc, long a pillar of the party's coalition.

Both parties have been especially focused on the Rio Grande Valley in south Texas, made up of heavily Latino communities where the Biden administration's struggle to address problems along the U.S.-Mexico border is a central issue. The GOP believes it will win as many as three House seats in the former Democratic stronghold.

The GOP is also bullish about its standing in Florida's Miami-Dade County, home to 1.5 million Latinos of voting age and a Democratic stronghold for the past 20 years. The GOP made significant gains there in the last presidential election.
Should Democrats lose Miami-Dade, it would virtually eliminate their path to victory in statewide contests, including presidential elections.

The Latino vote will be consequential in other states but none more so than in Arizona and Nevada, where Democrat Catherine Cortez Masto, the nation's first Latina senator, is locked in a close race.

How do Trump’s candidates perform?

Trump remains a dominant force in the Republican Party, but Tuesday's contests will test his strength among the broader electorate.

He is not on the ballot, of course, but dozens of Trump-endorsed candidates are. They include several controversial picks who beat out alternatives backed by the party's establishment.

Should Trump's higher-profile endorsees struggle, it would raise questions about his political strength as he weighs a 2024 presidential run that could be launched shortly after the midterms.

In Pennsylvania, Trump loyalist Doug Mastriano, the Republican candidate for governor, has struggled in the polls against Democrat Josh Shapiro. Trump's pick for the Senate, Dr. Mehmet Oz, is locked in a close race with Democrat John Fetterman. In Arizona, gubernatorial candidate Kari Lake and Senate contender Blake Masters, who both promoted Trump's lies of a stolen 2020 election, are in position to win.

A bad night for Democrats could undermine Biden's rationale for a second term. And Trump would almost certainly seize on sweeping Republican victories as evidence of his political strength ahead of a third prospective White House bid.

In Nevada, Republican Jim Marchant is running to become the secretary of state, the state's chief elections official. Marchant is head of the America First Secretary of State Coalition, a collection of Trump loyalists who falsely say the 2020 election was plagued by voter fraud.

It's the same in Arizona and Michigan, where fellow coalition members Mark Finchem and Kristina Karamo are running for secretary of state. And in Pennsylvania, Republican gubernatorial candidate Doug Mastriano, another vocal election denier, would have the authority, if he wins, to appoint his own chief elections official.

Election administration aside, other statewide candidates could use a strong showing on Tuesday to position themselves for the 2024 ticket.

Lake, Arizona's Republican candidate for governor, is already thought to be a potential Trump running mate. And in Florida, Gov. Ron DeSantis, who is running for reelection Tuesday, is also considering a 2024 presidential bid, whether Trump runs or not.

What will we know before we go to bed?

It’s possible — maybe even likely — that the outcome in several key contests may take days or even weeks to be finalized.
The reasons are many.

In Georgia, a candidate must earn at least 50% of the vote to win outright. Otherwise, the election goes to a Dec. 6 runoff. Strategists on both sides believe the state's Senate race, in particular, may do just that.

In other states, the process of counting votes can be long and complicated, especially as voting by mail becomes more popular.

Under Arizona law, for example, all ballots must be returned by 7 p.m. on Election Day, but officials have 20 days to finalize their counts. In Nevada, counties have four days to count late-arriving mail ballots and give voters two more days to fix mail ballots that arrive in envelopes with errors or missing information.

In some swing states, including Pennsylvania and Wisconsin, officials are not allowed to begin validating mail ballots until Election Day. Nineteen states provide a grace period to receive mail ballots as long as they were sent by Election Day. Such ballots in California can be received up to seven days later.

This could take a while.