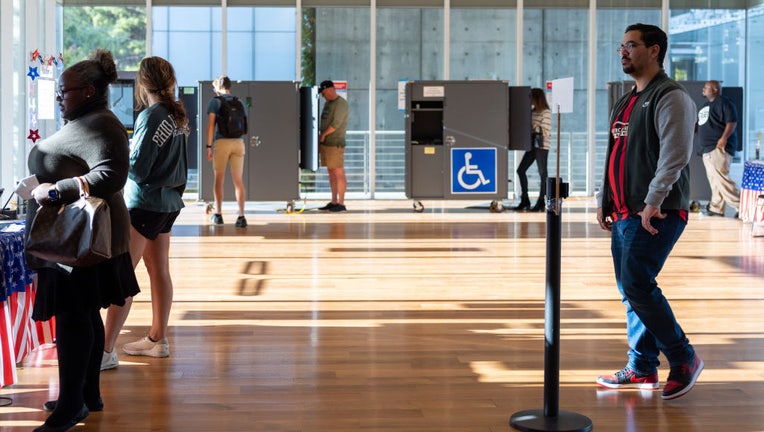 WASHINGTON - Democrats have held both chambers of Congress and the presidency for the last two years, but they may not have such consolidated power for much longer.

Republicans are favored to win the House in the Nov. 8 midterm elections, bolstered by frustration over the economy and advantages in the redistricting process that takes place every 10 years. But Democrats are working to hold their ground, campaigning on maintaining access to abortion and other issues.

RELATED: Which states have voting changes on the ballot this election?

The outlook is murkier in the Senate, where Republicans are bidding to take back control. Several races in key battleground states are tight, leading Senate Republican leader Mitch McConnell to say the chances of his party winning a majority are just 50-50.

A look at control of Congress and what will happen if Republicans win a majority in either chamber in the election:

What if the House flips?

Democrats, led by House Speaker Nancy Pelosi, have held the majority since 2018, when they won control in then-President Donald Trump’s first midterm election. Republicans could take back the House if they net just five seats in dozens of competitive districts, and they are trying to win dozens.

RELATED: Which states are voting on abortion rights this election?

If Republicans win the House on Nov. 8, the GOP caucus will elect a new speaker and take power on Jan. 3, 2023. They will run every committee and decide what bills come to the House floor.

House GOP Leader Kevin McCarthy has already unveiled his "Commitment to America," a broad outline of economic, border security and other policies that the GOP would propose in the early days of the next Congress.

A return to Republican power in the House would be a victory for Trump, who has fought Democrat-led efforts to hold him accountable for the Jan. 6, 2021, Capitol insurrection. The vast majority of Republicans who are expected to return to Washington next year, along with most of those hoping to win a first term, are loyal to Trump and have followed his example in their policies and positions.

Among those allies are far-right members like Rep. Marjorie Taylor Greene of Georgia, who was stripped of her committee assignments by Democrats because of her extreme rhetoric but would be part of a broad governing majority under a GOP House. Greene stood behind McCarthy as he introduced the "Commitment to America" in Pennsylvania last month.

What would a GOP House mean for Biden?

Democratic priorities like access to abortion, addressing climate change and stricter gun control would immediately be sidelined. And most, if not all, of President Joe Biden’s agenda would be effectively dead for the final two years of his term.

Still, nothing becomes law without Biden's signature. Bills to fund the government, raise the debt ceiling and deal with military issues are necessary for government to function. Those bills are likely to become flashpoints in negotiations between the GOP, Democrats and the White House.

Biden, who served in the Senate for decades, has often touted his bipartisan credentials and said he wants to work with Republicans. But there would be little appetite for that in a GOP Congress that has made opposition to Biden its top priority.

What about the Senate?

While the Senate could tilt either way after the midterm elections, the majority party is still likely to have the slimmest of margins. That means Biden will be able to find a bit more common ground there, no matter who is in charge. Much of Biden's legislative achievements in office have been the byproduct of bipartisan negotiations in the Senate.

Still, a Republican-led Senate could pass bills sent over by a GOP House, putting political pressure on Biden. And the GOP would regain control of committees and, with it, the power to conduct investigations and oversight of the administration.

A Republican Senate could also make life difficult for Biden by blocking or delaying passage of the president’s judicial and executive branch nominees.

What if Democrats win?

If Democrats were to hold the Senate and Republicans win the House, the two chambers would be unlikely to find much common ground. But Republicans could try to win over Democratic Senate moderates on some legislation.

If Democrats were able to keep the House and the Senate, they would likely restart negotiations on some of Biden’s agenda items that were never passed, including his new package of social and economic programs that stalled amid internal Democratic disagreements.

The majority of House districts aren't competitive, thanks to a redistricting process that allows state legislatures to draw their own congressional lines if they decide to. Many legislatures draw lines to give advantages to one party or the other.

Still, dozens of seats are in play, including many of those held by Democrats who won in suburban districts in 2018, winning the majority for the party that year.