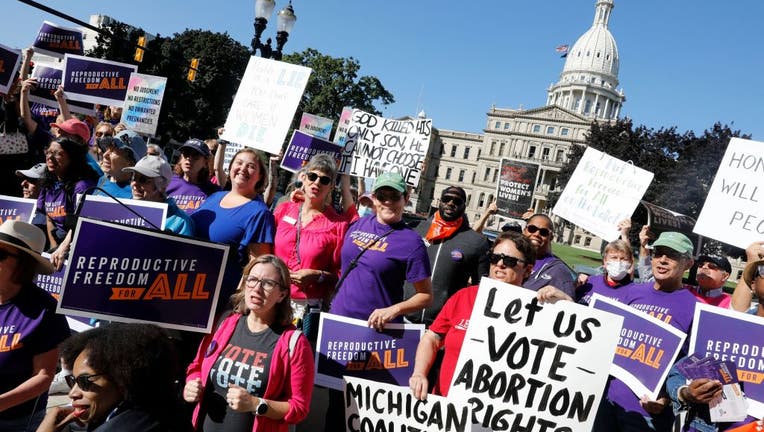 Pro choice supporters gather outside the Michigan State Capitol during a "Restore Roe" rally in Lansing, on September 7, 2022. (Photo by Jeff Kowalsky/AFP via Getty Images)

The Supreme Court's June ruling that overturned Roe v. Wade and left the question of abortion rights up to the states has produced ballot questions in a handful of states this fall.

Three states are asking voters some variation of whether they want to establish a right to abortion, while a single state is asking if its constitution should be changed to say there is no such right to abortion or for government funding.

Kansas voters resoundingly rejected a ballot measure that would have permitted lawmakers to tighten abortion laws or outlaw the procedure outright in August — the first such test since the high court's ruling.

Let's take a closer look at what voters will be deciding when voting concludes Nov. 8:

What questions are on the ballot and where?

California, Michigan and Vermont are all considering questions that would amend their state constitutions to establish some form of a right to abortion.

Kentucky is asking voters whether to amend the state constitution to say it doesn't protect the right to an abortion.

Montana is asking voters whether to require medical care and treatment for infants born alive after an attempted abortion.

Why these questions and why now?

The ballot measures come in the aftermath of the Supreme Court's ruling in June that the U.S. Constitution doesn't confer a right to abortion and "the authority to regulate abortion must be returned to the people and their elected representatives."

Vermont Gov. Phil, Scott suggested in a statement this summer that the question had taken on new urgency since the court's ruling.

"It is more important than ever to make sure the women in our state have the right to make their own decisions about their health, bodies, and their futures," he said.

Kentucky has moved to tighten restrictions to abortion since the GOP took control of the Legislature in 2016, and Montana's Republican-controlled Legislature passed the legislation referring the question to voters before the U.S. Supreme Court's ruling this summer overturning Roe vs. Wade.

Kentucky's Supreme Court is hearing arguments in a case over the state's near total abortion ban after the November election, but has kept that prohibition in effect while the case is pending.

Abortion is currently legal in Vermont, with no limit on when during a pregnancy it can be carried out. California and Michigan permit abortions before viability, usually defined as around 24 weeks. Montana restricts abortions after viability as well, but a court has put a hold on a measure that would bar the procedure after 20 weeks pending litigation.

What is the status of abortion in these states currently?

State legislatures and courts have shifted the status of abortion laws across the United States.

Bans are in place at all states of pregnancy in a dozen states.

RELATED: Many remain critical of state of US democracy, new poll reveals

In Wisconsin, clinics have stopped providing abortions though there’s dispute over whether a ban is in effect.

In Georgia, abortion is banned at the detection of cardiac activity — generally around six weeks and before women often know they’re pregnant.

Seven states, including the District of Columbia, don't restrict abortion by gestational range at all.