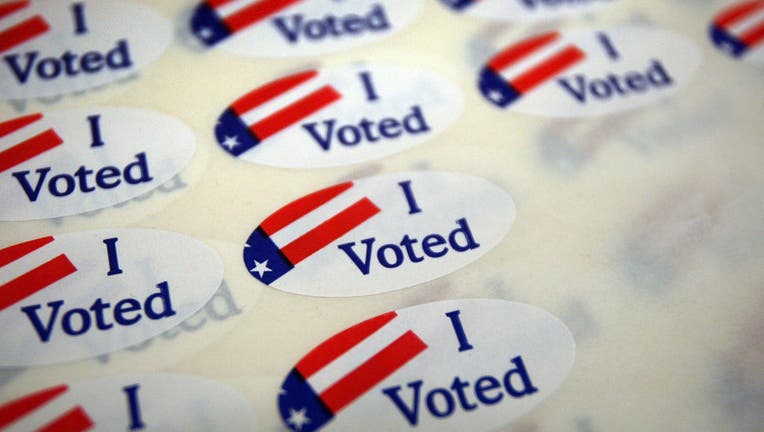 A sheet of voter stickers. (Photo by David McNew/Getty Images)

Besides picking their elected representatives, voters across the country are deciding ballot measures that could reshape the ways they cast ballots in coming elections, or even how things get on the ballot.

About half of states allow citizen initiatives. That's when groups can bypass a legislature by collecting a certain number of signatures of registered voters to put proposed laws or constitutional changes on the ballot. Executive or judicial officials often still have some role in the process, typically by certifying that ballot wording is clear and accurate, and that petition circulators gathered enough valid signatures of registered voters.

A number of measures on ballots this fall involve proposed changes to states' election laws, as well as a slew of proposals dealing with the future handling of ballot initiatives themselves.

Here's a look at some of them:

In Arizona, scene of the closest presidential contest in 2020, among voters' questions is whether to strengthen voter identification laws in the future.

After a lengthy review process confirmed Democrat Joe Biden's presidential win in the state, Republicans who control Arizona's Legislature placed a proposed constitutional amendment on November's ballot that would require people voting in person to show a photo ID. The measure also eliminates a current alternative of providing two documents bearing a person’s name and address, like a recent utility bill and bank statement. People voting with mailed ballots — the vast majority in Arizona — would have to list their date of birth and either their driver’s license number, a state identification number or the last four digits of their Social Security number. Only a few states — Georgia, Minnesota, Ohio — have similar proof-of-identity measures for mailed ballots, according to the National Conference of State Legislatures. Arkansas requires voters to provide a copy of a photo ID when returning a mailed ballot.

In Nebraska, Republicans haven’t been able to get a voter photo ID bill through the nonpartisan Legislature. But it will appear on the November ballot, thanks to an initiative petition drive bankrolled by Marlene Ricketts, the mother of term-limited Republican Gov. Pete Ricketts.

Not all states propose beefing up voter ID requirements. A Michigan ballot initiative would pre-empt Republican attempts to tighten photo identification laws by amending the state Constitution to include the current alternative of signing an affidavit.

RELATED: Which states are voting on abortion rights this election?

Just four states — Alabama, Connecticut, Mississippi and New Hampshire — lack an in-person early voting option for all voters. Some states are looking to change that.

Michigan’s proposal this year would also expand early voting options, require state-funded return postage and drop boxes for absentee ballots, and specify that the Board of State Canvassers has only a "clerical, nondiscretionary" duty to certify election results.

A proposed constitutional amendment in Nevada would advance the top five vote-getters in an open primary. It then would use ranked choice voting to determine the winner of the general election. If no candidate received a majority on the first count, the votes for the bottom candidate would be reassigned to voters’ next preferences until one candidate has a majority. If it's approved this year, the system would need a second vote in 2024 to take effect. A similar system already exists for some elections in Maine. Ranked choice voting began this year in Alaska.

Voters in Alabama will consider a proposal that would require any changes to election laws to be implemented at least 6 months before an election.

While plenty of other states have ballot measures about how people get to vote, Arizona is ground zero for initiatives about initiatives — many of them dealing with the future of initiatives themselves.

Arizonans have the opportunity to consider proposals that would require 60% voter approval for future ballot initiatives. A similar measure is also being considered in Alabama.

Other Arizona measures would require future citizen initiatives to contain a single subject — rather than multiple topics — and allow state lawmakers to amend or repeal voter-approved ballot measures containing provisions previously struck down by courts.

Since the majority of votes cast in Arizona are by mail, it's unlikely that the outcome of these ballot questions will be known until after Nov. 8.