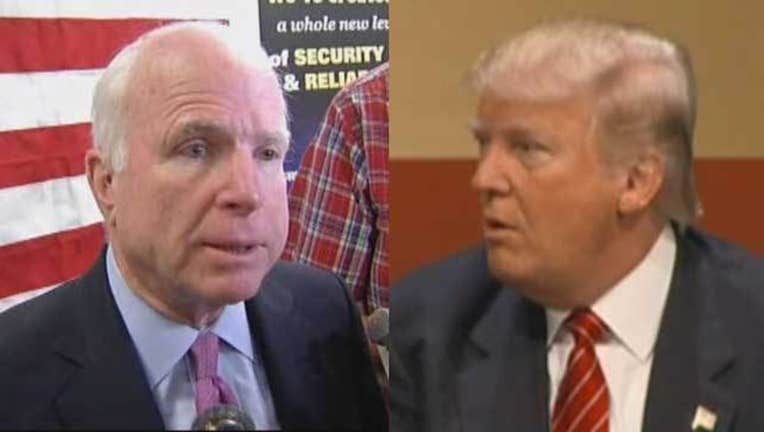 WASHINGTON (AP) -- Sen. John McCain said Monday that Republican presidential candidate Donald Trump doesn't need to apologize to him for remarks about his captivity in Vietnam, but should tell veterans he's sorry.

Appearing in a nationally broadcast interview, the Arizona Republican said, "When Mr. Trump says he prefers to be with people who are not captured, the great honor of my life was to be in the company of heroes."

"I am not a hero ... I'm in the arena," McCain said Monday on MSNBC, suggesting he's fair game for criticism as an elected official.

In an opinion piece published Monday in USA Today, Trump said McCain has abandoned the nation's veterans and made America "less safe" through his votes in Congress.

The real estate executive also lashed out at fellow GOP presidential aspirants who have criticized his remarks, calling them "failed politicians." Trump said he did not need "to be lectured by any of them."

The op-ed comes as Trump is on the defensive for dismissing McCain's reputation as a war hero because McCain was captured in Vietnam and, "I like people who weren't captured."

On a contentious appearance on the NBC's "Today" Show Monday, Trump took issue with the media's reporting on his comments about McCain's war record, made at a conservative forum in Iowa.

Trump insisted in a telephone interview with anchor Matt Lauer that he had said "four times" that he respected those captured in war.

McCain said he believes it was "totally inappropriate for Mr. Trump to say he doesn't like to be with people who are captured."

"I think the point here is that there are so many men and women who served and sacrificed -- and happened to be held prisoner -- and to denigrate in any way that service, I think, is offensive to veterans."

"The best thing to do is put it behind us and move forward," McCain said.