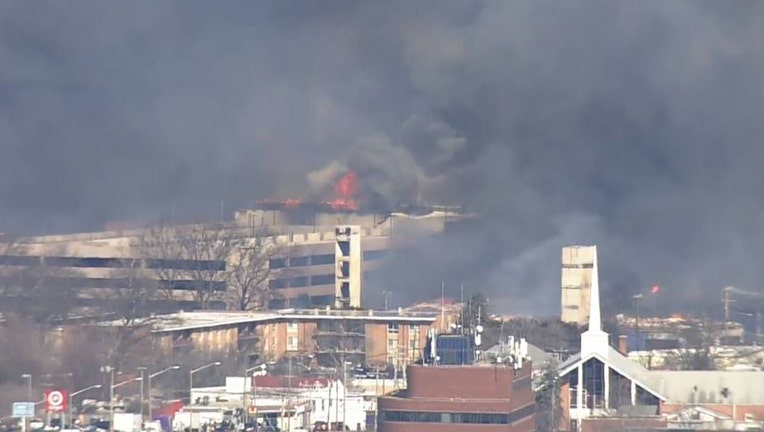 A view of the fire from Skyfox. (Skyfox)

ALEXANDRIA, Va. - The cause of the massive northern Virginia fire that could be seen for miles Saturday morning is still unknown, officials say.

Two firefighters and another person were hospitalized for minor injuries following the four-alarm blaze, which broke out around 9:40 a.m. Saturday near Route 1 and Poag St. in the Groveton area of Fairfax County.

A construction worker told firefighters the blaze started in a trash chute at a construction site on the scene before spreading to nearby buildings. The fire destroyed a five-story condominium building under construction and damaged another 14 town homes, four single-family homes, five apartment buildings, a commercial building and 28 vehicles.

Fairfax Fire Chief John Butler told reporters Sunday that, as is common in buildings under construction, there was no sprinkler system at the construction site. High winds complicated firefighters' efforts extinguishing the blaze.

Hundreds of neighbors lost power, and people from as far away as Waldorf, in Charles County, called in to Fox 5 to say they saw the massive cloud of black smoke rising above the blaze.

Firefighters say they are still monitoring hot spots on the scene.