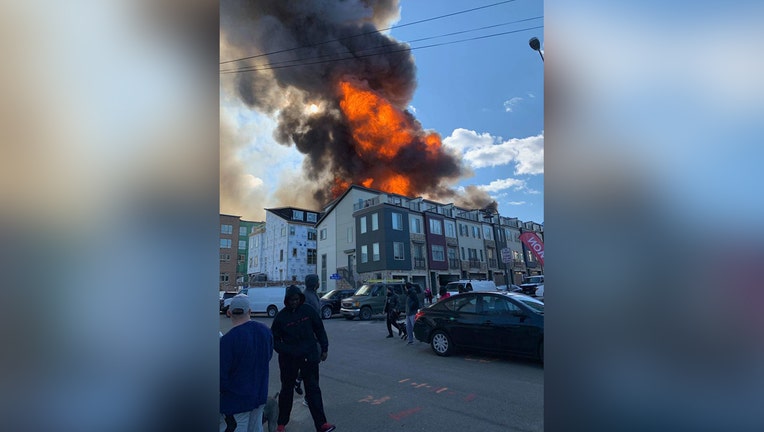 Firefighters battling a blaze in the 2800 block of Poag St. on Saturday morning. (Fairfax County)

UPDATE (1:58 p.m.): Officials say the fire is "contained" but will remain on scene for the next 24 hours as a precaution.

ORIGINAL: Route 1 is shut down in both directions in Alexandria as firefighters battle a 4-alarm blaze Saturday morning.

Firefighters aren't reporting injuries so far at the scene in the 2800 block of Poag St. The fire broke out in a construction site slated for a future five-story condominium building.

As of 10:45 a.m. firefighters on the scene were saying that the blaze was spreading beyond the construction site. They were evacuating nearby townhouses.

Viewers from as far as Prince George's County say they can see the fire.

By 11:30 a.m. viewers in Prince George's County were saying ash from the fire was falling from the sky:

Dominion Energy reported about 800 power outages in the area as of 11:50 a.m.

A neighbor tells Fox 5 the fire started in the construction site's trash chute:

Witnesses shared the following photos and video with Fox 5: