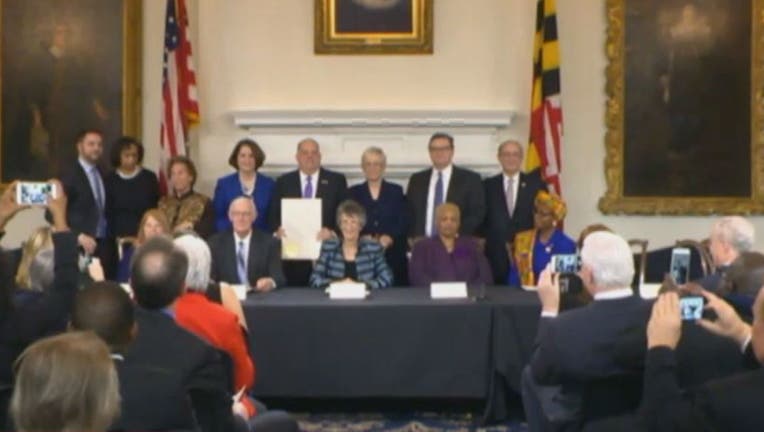 ANNAPOLIS, Md. (AP) -- The Latest on Maryland's 10 members of the electoral college meeting in Annapolis to vote (all times local):

Maryland's 10 electors have voted for Hillary Clinton for president, as required by law because Clinton won the state.

Republican Gov. Larry Hogan gave opening remarks at the start of the ceremony. He certified the vote of the electors.

The ceremony was broadcast live online for the first time.

Clinton, a Democrat, won 60 percent of the Maryland vote.

She won the nation's popular vote by 2.6 million votes, but Republican President-elect Donald Trump is poised to win 306 of the 538 electoral votes under the state-by-state distribution of electors used to choose presidents since 1789.

Dozens of demonstrators are rallying in Annapolis, as Maryland's 10 members of the Electoral College are scheduled to vote.

People stood in front of the Maryland State House on Monday morning to hold signs that read: "Stand up to Trump," and "We the People Elected Hillary Clinton."

Tom Molineaux, of Bowie, Maryland, says he's concerned President-elect Donald Trump has a "hateful message" and is "dangerous" for the country.

Maryland's 10 electors are bound to vote for Clinton, a Democrat who won the state last month. They are scheduled to convene at 1 p.m.

Clinton won the popular vote by 2.6 million votes, but Trump is poised to win 306 of the 538 electoral votes under the state-by-state distribution of electors used to choose presidents since 1789.

Maryland members of the Electoral College are meeting in Annapolis to cast their votes.

State Board of Elections spokeswoman Donna Duncan says the 10 electors are meeting at 1 p.m. Monday in the Maryland State House.

They're required by law to vote for the presidential and vice presidential candidates who received the plurality of votes cast in the state in the Nov. 8 general election.

The Democratic ticket of Hillary Clinton and Tim Kaine won in Maryland. They also won the nationwide popular vote. But the Republican ticket of Donald Trump and Mike Pence won in states with more Electoral College votes than the Democrats.

Duncan says the actual voting will take about 30 minutes, preceded by ceremonial speeches and followed by the signing of official documents.