Mark Turgeon is out as Maryland’s basketball coach after a slow start to his 11th season knocked the team out of the Top 25.

WASHINGTON - Mark Turgeon is out as Maryland’s basketball coach after a slow start to his 11th season knocked the team out of the Top 25.

The athletic department announced Friday that Turgeon was stepping down in what it called a mutual decision. Assistant Danny Manning was made interim coach for the rest of the season.

"After a series of conversations with Coach Turgeon, we agreed that a coaching change was the best move for Coach Turgeon and for the Maryland men’s basketball program," athletic director Damon Evans said in a statement. "He has dedicated over a decade of his life to the University of Maryland, and has coached with distinction and honor." 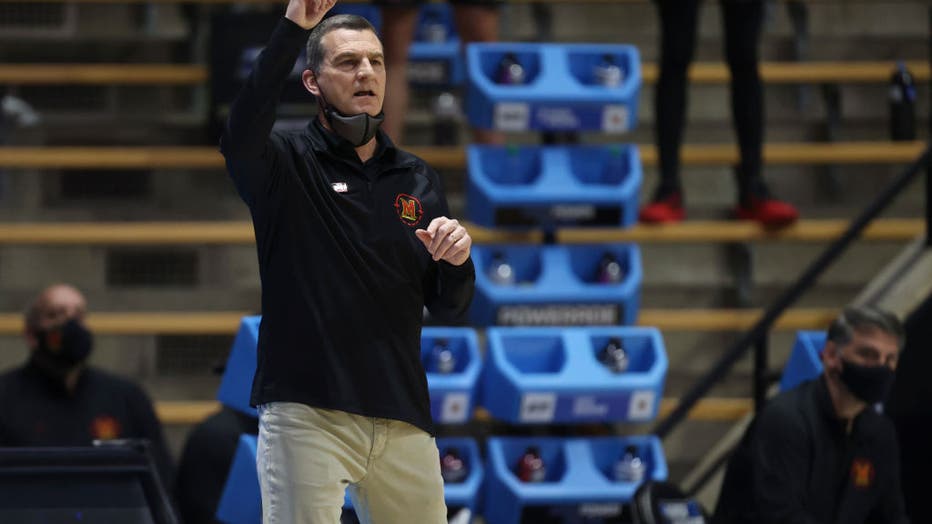 WEST LAFAYETTE, INDIANA - MARCH 20: Head coach Mark Turgeon of the Maryland Terrapins gestures during the second half against the Connecticut Huskies in the first round game of the 2021 NCAA Men's Basketball Tournament at Mackey Arena on March 20, 20

The Terrapins won at least 23 games in five of the past seven seasons, but Maryland has reached the Sweet 16 just once under Turgeon and hasn’t gone further. The Terps began this season ranked, but a loss at home to Virginia Tech on Wednesday night dropped them to 5-3 on the season.

"After several in-depth conversations with Damon, I have decided that the best thing for Maryland basketball, myself and my family is to step down, effective immediately, as the head coach of Maryland basketball," Turgeon said. "I have always preached that Maryland basketball is bigger than any one individual. My departure will enable a new voice to guide the team moving forward."

Turgeon went 226-116 at Maryland and is 476-275 overall as a head coach. He coached at Jacksonville State, Wichita State and Texas A&M before being hired to take over the Terrapins.

"Maryland basketball has been my passion and focus for the last 10 seasons, and I am extremely proud of what we have accomplished," Turgeon said. "It is through the combined effort and commitment from our coaches and players, both past and present, that we have sustained consistent success in a sport that is ultra-competitive. ... It has truly been an honor to be the men’s basketball coach at the University of Maryland."

Manning, who led Kansas to the 1988 NCAA title as a player, spent six years as the head coach at Wake Forest before joining the Terps as an assistant this season. Manning and Turgeon played three seasons together at Kansas.

Manning also was the head coach at Tulsa before taking over the Wake Forest program.

Maryland said a national search for the next coach will begin after the season.