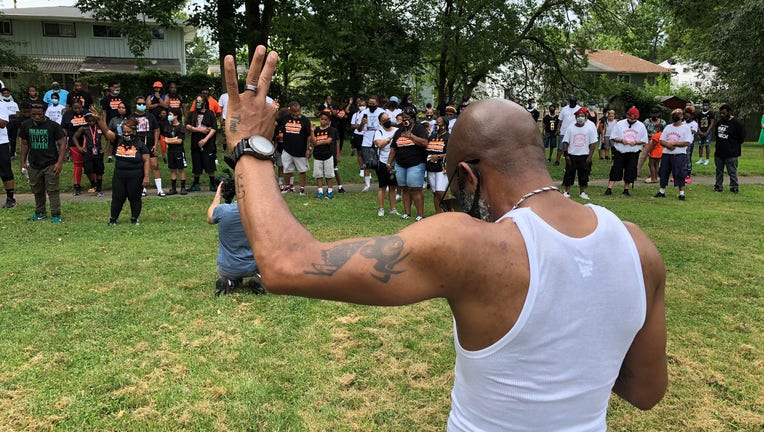 WASHINGTON - Young area football players and their families marched a few miles in the heat Saturday to honor a slain 6th grader in what is the now the fifth straight day of marching to end gun violence in 11-year-old Davon McNeal’s name.

McNeal died when shots rang out after a July 4th “peace” cookout event on the 1400 block of Cedar St. Southeast.

The peace event was organized by the 11-year-old’s mother, who is a DC Violence Interrupter.

DC police arrested a second suspect on Friday. Police are searching for at least two more. Ever since McNeal's death, the community and his family have been marching through D.C. streets, calling on those involved to come forward.

Saturday's march included young players who shared a field with McNeal, who played for the Metro Bengals and Watkins Hornets.

“Twenty eight touchdowns in a career is some people’s stats! And he did this in one season. It lets you know how great of a talent he was. But even more, he was a great kid,” said Rayvon Wills, who started a group called 'Rebels with a Cause' to help local kids with counseling.

Wills says he also wants to help give young kids an outlet to express themselves, and heard from the youth sports community that the children wanted to march for McNeal.

“My old teammate Carter knew about, knew him because he started playing for his team,” said an 8-year-old player, wearing a Peppermill Pirates green and black jersey.

A 10-year-old football player told FOX 5 “I didn’t know exactly what happen when I heard. I just wanted to come out here to show respect.”

These are two of the young boys around the victims’ same age -- children who shouldn’t have to face this. Still Saturday, they marched alongside adults who tell FOX 5 DC they’ve also lost loved ones to gun violence.

“This young baby, he didn’t deserve none of this,” said Melissa McDonald, who says she lost a nephew and cousin.

Alden Wilson, who told FOX 5 he lost his brother to gun violence 18 years ago, said on Saturday, “I have a 10-year-old son, who went to school with the young man. And my son called crying. It made me feel like that could’ve been my son. It’s crazy how we’re out here killing each other for no reason.”

Police announced the first arrest in the case Thursday, just five days after the 11-year-old was killed.

Police are still searching for 19-year-old Carlo General and 15-year-old Marcel Gordon. They may also announce a fifth suspect in the case.

“Turn yourselves is” is what those, including Davon’s Grandfather John Ayala, have chanted through DC’s streets this week.

This is the 5th straight day the community has gathered after Ayala called on all those marching for Black Lives Matter, to also march for an end to violence in their own neighborhoods.

“That was a beautiful sight because what they’re doing is letting those young people understand that enough is enough. It’s time for ya’ll to become role models and take action,” said Ayala Saturday morning. Both he and his wife followed the march.

“You’re going to see change in the city today. And I want to thank everyone that was marching every single day. Or if you did it one day. Thank you. You know, you made a difference. Do not think that it didn’t change anything. Someone saw you. Someone saw what was going on reflected on what they were doing,” said Wills.

They expect the whole walk to take around two hours. Wills is planning to end the march at the 1400 block of Cedar Street SE, where Davon was killed – and where those marching are planning to meet the young victim’s mother.

Wills says anyone seeking help for their children through his group, “Rebels with a Cause,” can contact him by email at: RayvonWills@gmail.com.

Wills says another gathering is also planned for Davo on Saturday evening, one week after his death.

ONLY ON FOX 5: Mother of 11-year-old shot and killed in DC speaks out