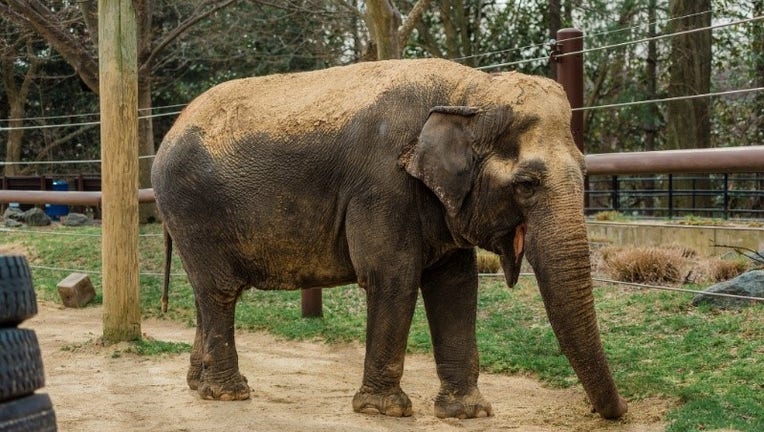 Ambika was the third-oldest Asian elephant in North America, at about 72 years old.

The zoo says it euthanized Ambika on Friday after a "recent and irreversible" decline in her health.

At an estimated 72 years old, Ambika was the third-oldest Asian elephant in North America.

She lived at the Zoo for 59 years, and the Smithsonian says she was "integral to the Zoo’s campaign to save Asian elephants from extinction and a favorite among generations of Zoo visitors."

“Ambika truly was a giant among our conservation community,” Steven Monfort, John and Adrienne Mars Director, Smithsonian’s National Zoo and Conservation Biology Institute, said in a statement. “For the past five decades, Ambika served as both an ambassador and a pioneer for her species. It is not an exaggeration to say that much of what scientists know about Asian elephant biology, behavior, reproduction and ecology is thanks to Ambika’s participation in our conservation-research studies."

Ambika had undergone treatment for osteoarthritis, a condition that first developed when she was in her late 60s.

The Zoo says keepers last week noticed that Ambika’s right-front leg, which bore the brunt of her weight, developed a curve that weakened her ability to stand.

Ambika was euthanized in the Zoo's Elephant Barn. Her herdmates, Shanthi and Bozie, were not present for the procedure, but were given an opportunity to spend some time with their deceased herdmate given their close bond with her.

"For approximately 15 to 20 minutes, Shanthi and Bozie walked around Ambika," the Zoo says. "They sniffed and touched her with their trunks. Although the pair usually communicate with squeaks, honks and trumpets, they were fairly quiet during this encounter."

Born in India around 1948, Ambika was captured in the Coorg forest when she was about 8 years old. She worked as a logging elephant until 1961, when she was given to the Zoo as a gift from the children of India.

Elephant keepers have fondly reflected on Ambika’s sense of humor, particularly during mealtimes, when the persnickety eater would arrange her grains to her liking before eating.