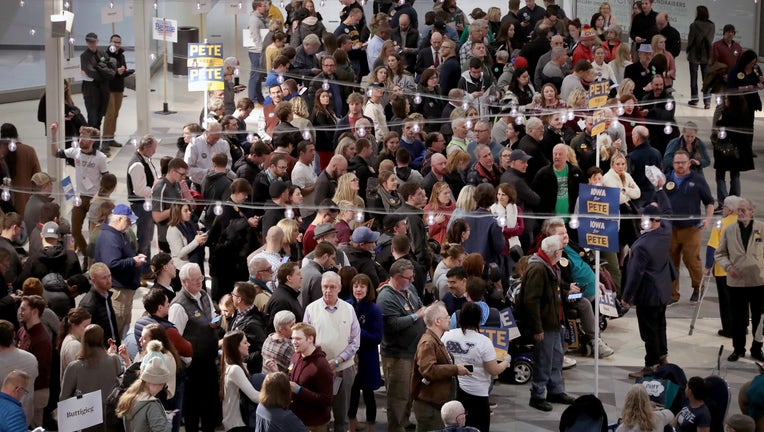 Iowa residents attend a caucus to select a Democratic nominee for president on Feb. 3, 2020 in Des Moines, Iowa. ((Photo by Scott Olson/Getty Images))

IOWA CITY, Iowa - Lines of people snaked out the door and down the block waiting to enter an Iowa caucus site Monday, among the early signs of strong turnout as Democrats begin choosing a nominee to take on President Donald Trump.

The start of a caucus in downtown Iowa City had to be delayed by more than an hour as hundreds of people were still waiting to check in or register to vote. Inside the Englert Theatre near the University of Iowa, 500 first-floor seats were mostly full and organizers were opening an additional 200 seats in the balcony.

In Polk County, Iowa's largest county and home to the capital city, Des Moines, Democratic county party chairman Sean Bagniewski said the party had printed tens of thousands of extra voter registration forms but some precincts were running out.

“We're making copies and deliveries to get them covered, but this caucus is gonna be the big one,” Bagniewski tweeted. He also said a caucus site in central Des Moines reported 1,080 participants, more than double the 440 who turned out in that precinct in 2016.

About 170,000 turned out in 2016. The high-water mark for the contest was the 2008 Iowa Democratic caucuses, when nearly 240,000 participated and Barack Obama defeated Hillary Clinton and Martin O'Malley.

Caucusgoers reported packed rooms in other locations. More than 500 people crowded into a room at the University of Iowa Athletics Hall of Fame in Iowa City to caucus, with many sitting on the floor. Around 400 people were at a high school cafeteria in Des Moines. In Davenport, 130 gathered at a middle school gymnasium.

In Iowa City, cheers erupted in the packed theater after precinct organizer Lois Cox announced that the last people in line had finally made it inside the building. “We’ll start momentarily!” she said.

Among those attending Monday night's caucuses were some newcomers to Democratic politics.

Norman and Lenora Iverson, both 86, voted Democratic for the first time. Lenora Iverson said they've voted Republican “forever," but they joined with their daughter in caucusing for Minnesota Sen. Amy Klobuchar, who was viable at the caucus at Hoover High School in north Des Moines.

Why did they switch parties?

"We don't like Trump," said Norman, a retired electrical engineer. "We don't want him to be president anymore. We've had enough of him."