Violent clashes resumed between anti-government demonstrators and security forces in Almaty, Kazakhstan’s largest city, on Wednesday, January 5, amid an eruption of unrest sparked by the removal of a cap on fuel prices.

MOSCOW (AP) - Security forces in Kazakhstan killed dozens of protesters and 12 police officers died in an eruption of violence that saw demonstrators storm government buildings and set them on fire, authorities said Thursday.

One police officer was found beheaded in the unrest, which poses a growing challenge to authoritarian rule in the former Soviet republic.

Despite the severe response by authorities, protesters took to the streets again Thursday in the country’s largest city, Almaty, a day after breaking into the presidential residence and the mayor’s office there.

Police were also out in force, including in the capital of Nur-Sultan, which was reported quiet, and a Russian-led force of peacekeeping troops was on its way.

Video from the Russian news agency Tass showed police firing intensely on a street near Republic Square, where demonstrators had gathered, though they could not be seen in the footage. Late Thursday, Tass said protesters had been swept from the square but that sporadic gunfire in the area continued.

Earlier, Russia’s Sputnik news service reported that shots were fired as police surrounded a group of about 200 protesters in the city.

Tens of thousands of people, some reported to be carrying clubs and shields, have taken to the streets in recent days in the worst protests the country has seen since gaining independence from the Soviet Union three decades ago.

The demonstrations began over a near-doubling of prices for a type of vehicle fuel, but seemed to reflect wider discontent in the country, which has been under the rule of the same party since independence.

In a concession, the government on Thursday announced a 180-day price cap on vehicle fuel and a moratorium on utility rate increases. It was unclear what effect the moves would have. 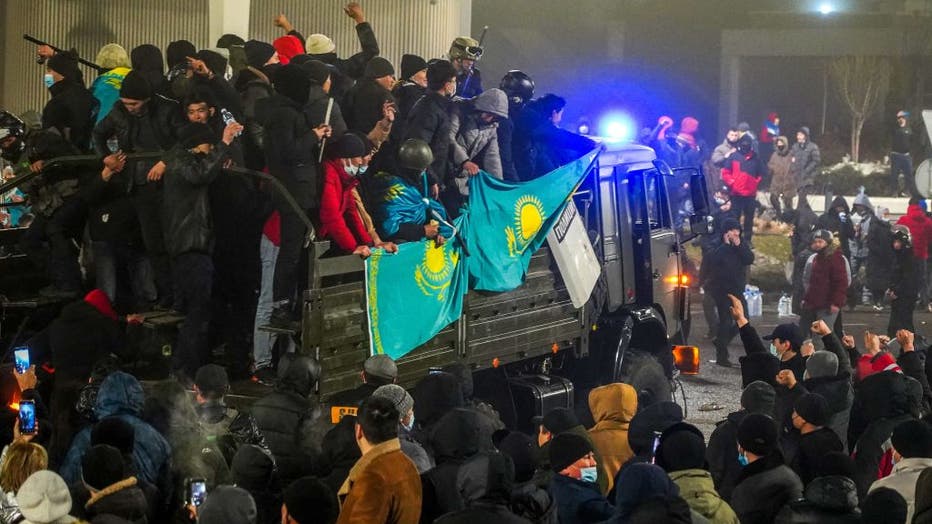 Protesters take part in a rally over a hike in energy prices in Almaty on January 5, 2022.

President Kassym-Jomart Tokayev has vacillated between trying to mollify the protesters, including accepting the resignation of his government, and promising harsh measures to quell the unrest, which he blamed on "terrorist bands."

Severe interruptions to internet and cellphone service made it difficult and sometimes impossible for news of what was happening inside Kazakhstan to get out. The airports in Almaty and one other city were shut down.

Worries that a broader crackdown could be on the horizon grew after Tokayev called on a Russia-led military alliance for help.

The alliance, the Collective Security Treaty Organization, includes the former Soviet republics of Kazakhstan, Belarus, Armenia, Tajikistan and Kyrgyzstan. The operation is its first military action, an indication that Kazakhstan's neighbors, particularly Russia, are concerned that the unrest could spread.

Russia and Kazakhstan share close relations and a 4,700-mile (7,600-kilometer) border, much of it along open steppes. Russia's Baikonur Cosmodrome space center is in Kazakhstan.

The CSTO's general secretary, Stanislav Zas, told Russia's RIA-Novosti news agency that the full contingent to be sent as peacekeepers would number about 2,500.

He rejected as "complete stupidity" suggestions that the troops would act as occupiers rather than peacekeepers. "The sincere wish of our states is real help for Kazakhstan in the difficult situation," he said.

However, White House press secretary Jen Pasaki said the U.S. has "questions about the nature of this request and whether it was a legitimate invitation or not."

"The world will, of course, be watching for any violation of human rights and actions that may lay the predicate for the seizure of Kazakh institutions," she said.

U.N. spokesman Stephane Dujarric called on security forces from within and without to "show restraint and protect people’s rights."

Tokayev has imposed a nationwide state of emergency and banned religious services. That is a blow to Kazakhstan's sizable Orthodox Christian population, which observes Christmas on Friday.