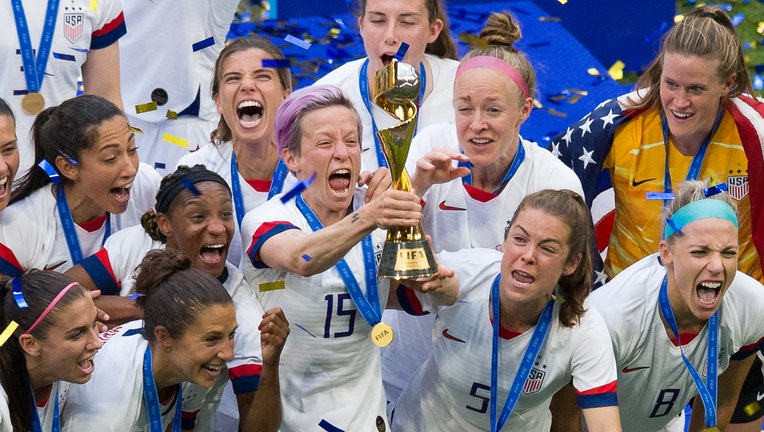 FILE - Megan Rapinoe of USA lifts the winners trophy and celebrates with team mates after the 2019 FIFA Women's World Cup France Final match between The United States of America and The Netherlands at Stade de Lyon on July 7, 2019 in Lyon, France. (Photo by Craig Mercer/MB Media/Getty Images)

LOS ANGELES - A federal judge threw out the unequal pay claim by players on the U.S. women's national soccer team in a surprising loss for the defending World Cup champions but allowed their allegation of discriminatory working conditions to go to trial.

Players led by Alex Morgan sued in March 2019, claiming they have not been paid equally under their collective bargaining agreement to what the men's national team receives under its labor deal. They asked for more than $66 million in damages under the Equal Pay Act and Title VII of the Civil Rights Act of 1964.

"The history of negotiations between the parties demonstrates that the WNT rejected an offer to be paid under the same pay-to-play structure as the MNT, and the WNT was willing to forgo higher bonuses for benefits, such as greater base compensation and the guarantee of a higher number of contracted players," Klausner wrote.

"Accordingly, plaintiffs cannot now retroactively deem their CBA worse than the MNT CBA by reference to what they would have made had they been paid under the MNT's pay-to-play terms structure when they themselves rejected such a structure," he said.

Klausner left intact claims the USSF discriminated in its use of charter aircraft, and in the money it spent on commercial airfare, hotel accommodations, and medical and training support services.

A trial is scheduled for June 16 in federal court in Los Angeles.

"We are shocked and disappointed with today's decision, but we will not give up our hard work for equal pay," Molly Levinson, spokeswoman for the women's players, said in a statement. "We are confident in our case and steadfast in our commitment to ensuring that girls and women who play this sport will not be valued as lesser just because of their gender."

Players intend to ask the 9th U.S. Circuit Court of Appeals to overturn Klausner's decision, a move that could delay the trial into 2021 or later.

"If you know this team at all you know we have a lot of fight left in us. We knew this wasn't going to be easy, change never is," defender Becky Sauerbrunn wrote on Twitter.

While the Americans are the most successful women's team, with four World Cup titles including the last two, the U.S. men did not even qualify for the 2018 World Cup.

The USSF argued the women actually made more than the men both overall and by game average, and the women claimed they should have the same bonus structure as the men.

"Merely comparing what WNT players received under their own CBA with what they would have received under the MNT CBA discounts the value that the team placed on guaranteed benefits they receive under their agreement, which they opted for at the expense of higher performance-based bonuses," Klausner wrote.

"This issue is insufficient to create a genuine issue of material fact for trial," he added.

Klausner also said the women could not go forward with their claim that the USSF discriminated against them by scheduling more games on artificial turf than the men had.

He said there was not sufficient evidence to show that decisions on field surface were made for discriminatory reasons.

He rejected the USSF's argument that the men had a competitive need for charter flights that the women lacked, allowing that part of the suit to go forward.

The federation has argued that the men, who have struggled in World Cup qualifying, have more need for charters than the women in order to arrive more rested for their qualifiers.

"This rationale does not fully explain the gross disparity on money spent on airfare and hotels for the teams," Klausner wrote.

In addition, the USSF has said spending in these areas has been equal since the women's union agreed to a new labor deal in 2017.

Klausner allowed other claims of discriminatory travel accommodations, such as money spent on hotels and commercial flights, to go to trial along with claims on support services such as medical and training staff.

He said the USSF's lawyers waited until reply briefs to ask for those claims to be thrown out, which meant he did not have to consider them.

That filing caused an uproar and led to the resignation of USSF president Carlos Cordeiro, who was replaced by Cindy Parlow Cone, a former national team player. Latham & Watkins took over as counsel and filed the reply brief.

Parlow Cone has said she hopes the suit can settle before a trial.

Earlier Friday, the women asked that Parlow Cone be included as a trial witness. Their lawyers said although the federation backed off earlier arguments saying women were inferior to their male counterparts in skill and effort, it still planned to contest differences in responsibility.