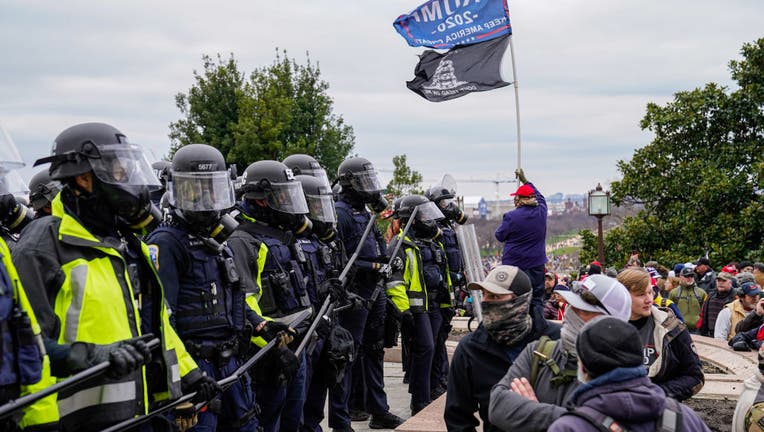 Capitol Hill police hold back protesters as crowds gather outside the U.S. Capitol for the "Stop the Steal" rally on January 06, 2021 in Washington, DC. (Photo by Robert Nickelsberg/Getty Images)

A year after thousands of violent pro-Trump rioters overwhelmed police officers at the U.S. Capitol — severely injuring dozens in the process — the force dedicated to protecting the premier symbol of American democracy has transformed.

The leaders who were in charge of the U.S. Capitol Police on Jan. 6 were ousted following criticism for intelligence and other failures that left the legislative branch vulnerable to the stunning attack. And more broadly, the agency that was once little-known outside of Washington now has an elevated profile, leading to a roughly 15% increase in funding and a greater awareness of its role in the patchwork of groups that protect the region.

With the nation's political divide running deep and an unprecedented number of threat against lawmakers, there is still concern about the readiness of the Capitol Police to thwart another attack. But experts say the shock of the insurrection has prompted needed changes, including better communication among the Capitol Police, other law enforcement agencies and the public.

"It’s a sea change between this year and last year in terms of how the Capitol Police are thinking, and operating," said Chuck Wexler, the head of the Police Executive Research Forum, an organization that focuses on professionalism in policing. "They’re going to be over-prepared, and willing to be criticized for being over-prepared."

As the temporary public face of the department, then-acting Police Chief Yogananda Pittman conceded to Congress in February that multiple levels of failures allowed rioters to storm the building. But she disputed the notion that law enforcement had failed to take the threat seriously, noting how Capitol Police several days before the riot had distributed an internal document warning that extremists were poised for violence.

The police department had compiled numerous intelligence documents suggesting the crowd could turn violent and even target Congress. The intelligence documents, obtained by The Associated Press, warned that crowds could number in the tens of thousands and include members of extremist groups like the Proud Boys.

The Capitol Police Board has oversight of the force and is comprised of the House and Senate sergeants-at-arms and the architect of the Capitol, who oversees the building. It passed over Pittman in its search for a permanent chief and, in July, selected J. Thomas Manger, the former chief of the police departments in Fairfax County, Virginia, and Montgomery County, Maryland.

Manger has focused on making major changes to the agency, which includes 1,800 sworn police officers and nearly 400 civilian employees. He's ordered new equipment for front-line officers and officers assigned to the civil disturbance unit while expanding training sessions with the National Guard and other agencies. He's also pushed for stronger peer support and mental health services for officers.

"I think that the damage that was done on Jan. 6 was not just the physical damage to the Capitol itself. It was not just the harm, the injuries, the deaths that occurred to the men and women of the Capitol Police Department, to the demonstrators, to the folks that were on the Capitol grounds that day," Manger said in an interview with the AP in September. "The damage went beyond that. It went to where it damaged, I think, the confidence of the American public that the Capitol could be adequately protected."

In the last year, Capitol Police say they have also improved the way that investigators gather, analyze and disseminate intelligence and have brought on someone dedicated to planning major events to focus on intelligence and coordination. The agency has also started conducting planning sessions and exercises ahead of major events and is briefing officers in person.

Many officers within the department had criticized their own leaders, saying they had failed to recognize the threat ahead of the insurrection and didn’t do enough to bolster staffing. Some officers were outfitted with equipment for a protest, rather than a riot.

But even with a new chief and major changes to operations, questions still remain about whether the Capitol is adequately protected. While many, both inside and outside the Capitol, were surprised by the attack that took place last January, some were cautioning the intelligence community to take the planned rallies by pro-Trump entities seriously.

Sen. Mark Warner, D-Va., who chairs the Senate intelligence committee, said he had been calling the FBI for days leading up to the attack and had been assured officials were prepared. But as he made his way to the Senate floor for the certification of Democrat Joe Biden’s electoral votes, he saw the crowd of protesters coming up the hill through the Capitol windows.

"I’ve been here a long time and lived in Washington for years, and never before had I seen protesters appearing to be that close to the building, and there was a lot of them," Warner told the AP last month. What happened next, he says, could only be described as chaotic, "ad hoc," and an embarrassment of a response.

The Capitol Police force’s watchdog has said only a small number of the recommendations he made to make the Capitol complex "safe and secure" have been adopted. And he says there were clear systemic issues identified after the insurrection.

"The Department still lacks an overall training infrastructure to meet the needs of the department, the level of intelligence gathering and expertise needed, and an overall cultural change needed to move the department into a protective agency as opposed to a traditional police department," Michael Bolton told lawmakers on the Senate Rules Committee last month.

Police say they have been focused on "completing the recommendations that could help prevent another attack" and have detailed plans in place to address the dozens of recommendations from the inspector general.

Still, the most pressing issue the force faces is staffing shortages. Manger plans to hire about 400 new officers and officials plan to bring on about 280 sworn officers this year.

"The United States Capitol Police is stronger than it was before January 6," the agency said in a statement. "We are incredibly proud of the work our dedicated employees have done during this challenging year."