NOAA has released timelapse footage recorded by the GOESEast satellite showing the evolution of Hurricane Sam from September 23-28, 2021.

MIAMI - Hurricane Sam continued its journey across the Atlantic Ocean on Wednesday as a Category 4 storm, likely to avoid any direct impact to the United States but expected to bring big waves to the East Coast by the weekend, according to forecasters.

Sam was located about 405 miles east of the northern Leeward Islands and traveling northwest at 9 mph, according to a Wednesday update from the National Hurricane Center. The Category 4 storm’s maximum sustained winds were clocked at 130 mph.

The storm was first classified as a tropical storm on Sept. 23, later strengthening into a hurricane. 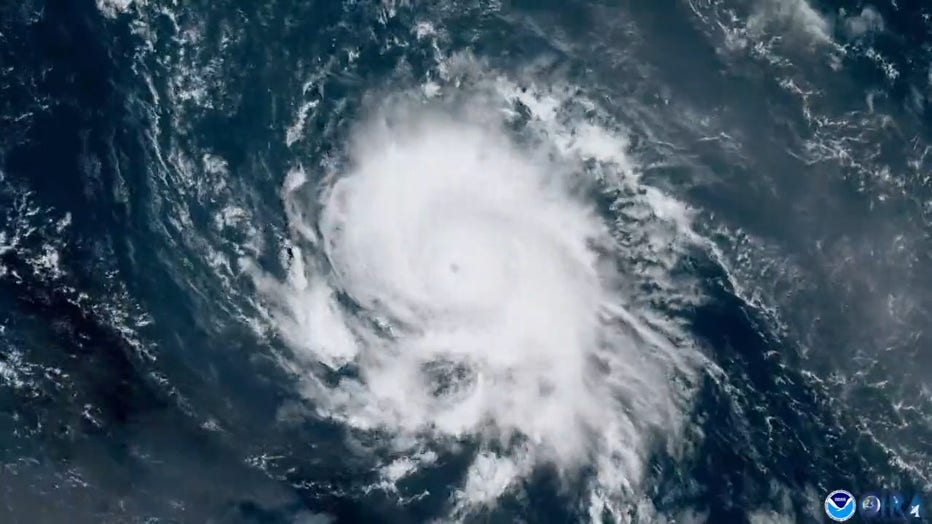 A screengrab from timelapse footage recorded by the GOESEast satellite shows Hurricane Sam moving across the Atlantic Ocean. (Credit: NOAA Satellites via Storyful)

Forecasters said large swells generated by Sam were impacting the Leeward Islands on Wednesday and would spread to portions of the Virgin Islands, Puerto Rico, Hispaniola, the Bahamas and Bermuda by Thursday or Friday. By the weekend, rough surf is expected to reach the East Coast.

"Significant swells will likely reach the east coast of the United States and Atlantic Canada by the weekend," the NHC said. "These swells will likely cause life-threatening surf and rip current conditions, and beachgoers and other interests along these coasts are urged to follow the advice of lifeguards and local officials through the upcoming weekend."

Timelapse footage recorded by satellite shows the evolution of Hurricane Sam from Sept. 23 through Sept. 28, released by the National Oceanic and Atmospheric Administration.

RELATED: Track the tropics on MyFOXHurricane.com