Supreme Court Justice Ruth Bader Ginsburg&nbsp;died at 87 of metastatic pancreatic cancer, according to the court.

Ginsburg died at 87 of metastatic pancreatic cancer, according to the court. She was the oldest sitting member.

In July, she had announced that she was undergoing chemotherapy treatment for lesions on her liver, the latest of her several battles with cancer. 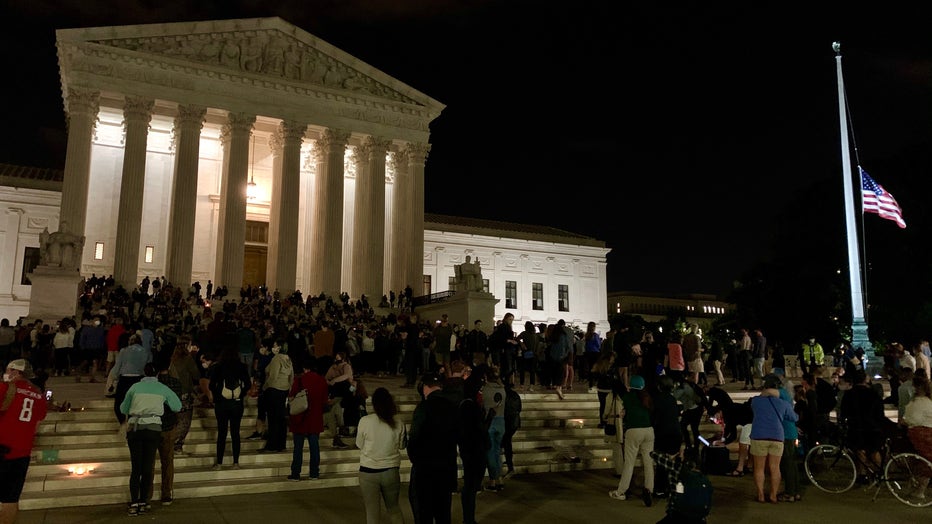 Flags were lowered to half-staff to honor Ginsburg's legacy outside of the Supreme Court and the U.S. Capitol building Friday.

FOX 5's Josh Rosenthal and photojournalist Craig Little report that a quiet, somber crowd of hundreds is currently growing by the minute outside of the Supreme Court building.

They also broke into applause every few minutes to honor her legacy.

FOX 5 photojournalist Ama Arthur-Asmah says three supporters of President Donald Trump went to the media staging area outside of the Supreme Court and said "this is a good day in America."

Many in the crowd then yelled for them to "go home" and began chanting "RBG."

"I am amazed at how quickly people organize. Posters, flowers and candlelit shrines are all over the Supreme Court steps. The impact of Ruth Bader Ginsberg’s passing is hitting people hard," Arthur-Asmah later tweeted while crowds remained gathered on the steps near midnight Friday.

“We have lost a champion of justice, an icon and patriot, a woman who lived the concept of building a more perfect union. Justice Ruth Bader Ginsburg fought for us until the very end, and it is that fighting spirit – that we were fortunate as a nation to benefit from time and time again – that made us love, respect, and admire her. Tonight, we are heartbroken. We are grateful for one life lived so fiercely that it forever changed the lives of millions. We send our condolences to Justice Ginsburg’s family and loved ones and to a nation already in mourning, trying once again to fathom a monumental and devastating loss.”