LOS ANGELES - U.S. Supreme Court Justice Ruth Bader Ginsburg died at 87 of metastatic pancreatic cancer, according to the court. She was the oldest sitting member.

Chief Justice John Roberts mourned Ginsburg’s passing. “Our Nation has lost a jurist of historic stature. We at the Supreme Court have lost a cherished colleague. Today we mourn, but with confidence that future generations will remember Ruth Bader Ginsburg as we knew her — a tireless and resolute champion of justice,” Roberts said in a statement.

Ginsburg had announced in July that she was undergoing chemotherapy treatment for lesions on her liver, the latest of her several battles with cancer.

Born Joan Ruth Bader on March 15, 1933 in Brooklyn, New York, she was the youngest of two children to Nathan and Celia Bader. It was when Ginsburg was in kindergarten that she decided to go by her middle name Ruth, according to Encyclopedia Britannica.

Ginsburg grew up in a low-income, working-class neighborhood of Brooklyn, where her father worked as a merchant and her mother worked at a clothing factory. Her older sister, Marilyn, died of meningitis when Ginsburg was only a baby.

Joe Biden speaks on the death of Ruth Bader Ginsburg

Democratic nominee Joe Biden, returning to Delaware from his own campaign stop in Minnesota, praised Ginsburg upon his arrival.

Her mother, Celia, taught her the value of independence and a good education, becoming a heavy influence in her daughter’s life.

“My mother told me two things, constantly. One was to be a lady, and the other was to be independent,” Ginsburg said.

Celia was diagnosed with cancer when Ginsburg was in high school and died days before her daughter’s graduation.

Ginsburg went on to attend Cornell University, where she graduated first in her class with a degree in government in 1954. That’s also where she met her husband, Martin D. Ginsburg. Nine days after graduating, she and Martin married.

Later that year, Martin was drafted into the military, where he served for two years. During his service, the couple was stationed in Oklahoma and Ginsburg gave birth to their daughter, Jane.

After Martin was discharged, the couple returned to Massachusetts, where Martin continued his studies at Harvard Law School and Ginsburg enrolled.

During her time at Harvard, Ginsburg said she encountered a hostile and male-dominated environment. She and only eight other women were part of a class of more than 500. Despite the struggle, she eventually became the first woman on the editorial staff of the Harvard Law Review.

In 1956, Martin was diagnosed with testicular cancer and needed extensive treatment and rehabilitation. During that time, Ginsburg took care of their daughter and helped her husband study, even taking notes for him in his classes in addition to attending her own. 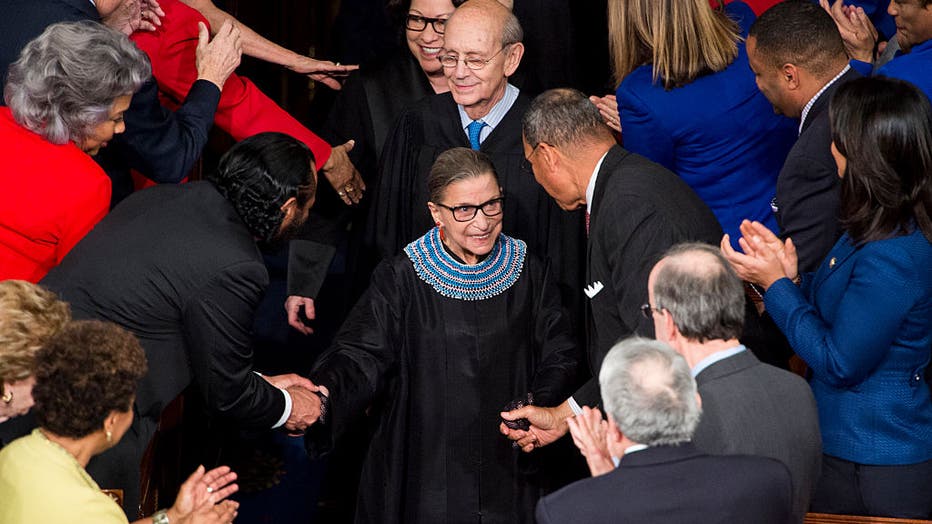 Martin eventually recovered and graduated from law school, where he was soon offered a job at a law firm in New York. Ginsburg and her daughter joined Martin in the city, and Ginsburg transferred to Columbia Law School.

While she attended Columbia, Ginsburg was also elected to the school’s law review journal and graduated first in her class in 1959.

After graduation, it was difficult for Ginsburg to find work because of her gender and for being a mother. But one of her Columbia law professors advocated on her behalf, convincing Judge Edmund L. Palmieri of the U.S. District Court for the Southern District of New York to hire Ginsburg as a law clerk. She worked there from 1959 until 1961.

After that, she became the associate director of a comparative law project sponsored by Columbia University. It required her to study the Swedish legal system.

In 1963, she joined the faculty at Rutgers Law School in Newark, New Jersey. While working there, she gave birth to her second child, James, in 1965. She remained at Rutgers until 1972. She then went to Columbia Law School, becoming the school’s first female tenured professor.

Ginsburg also served as a fellow at the Center for Advanced Study in the Behavioral Sciences in Stanford, California, for one year.

Then in the 1970s, Ginsburg fought sexual discrimination cases for the American Civil Liberties Union. She became founding counsel for the organization’s Women’s Rights Project in 1972. She also served as general counsel of the ACLU and sat on the national board of directors until 1980.

“We should not be held back from pursuing our full talents, from contributing what we could contribute to society because we fit a certain mold - because we belong to a group that historically has been the object of discrimination,” Ginsburg said during an interview.

During her time with the ACLU, Ginsburg argued before the Supreme Court six times and won five of those cases.

In one case, Ginsburg fought a provision of the federal tax code that denied single men a tax deduction for serving as caregivers to their families.

Another case involved an Idaho state law that showed a preference to men over women in determining who should administer estates of a person who died without a will.

On Aug. 10, 1993, Ruth took her seat as the second women to serve on the Supreme Court. Since then she’s overseen countless cases and wrote the court’s landmark decision in United States v. Virginia, which held that the state-run Virginia Military Institute could not refuse admission to women.

She also chose to use the phrase “I dissent,” rather than “I respectfully dissent” because she felt it was an unnecessary nicety. Her outspokenness, especially during the Obama administration, soon inspired her nickname, “Notorious R.B.G.,” which is a play on rapper Notorious B.I.G.

On June 27, 2010, Martin died of cancer. The couple were married for 56 years. The day after her husband’s death, she went back to work at the court because she said it’s what he would have wanted.

Her unusual remarks received negative comments from politicians and other critics, saying she was showing bias when she is supposed to be an impartial justice. Ginsburg later apologized for her comments.

Over the course of her time on the court, Ginsburg had multiple health scares. She fought colorectal cancer in 1999, pancreatic cancer in 2009, and received a heart stent in her right coronary artery.

Among her latest scares was in 2018, when she was hospitalized for fracturing three ribs which in turn led to doctors finding malignant nodules in her left lung. She underwent surgery to have them removed.

Despite those health problems, Ginsburg worked out regularly with a strict routine and never missed a day of oral argument.

The 2018 movie, “On the Basis of Sex,” focused on her life before she became a justice.

She resisted calls by liberals to retire during Barack Obama’s presidency at a time when Democrats held the Senate and a replacement with similar views could have been confirmed.

She is survived by two children, Jane and James, and several grandchildren.

Ginsburg once said that she had not entered the law as an equal-rights champion. “I thought I could do a lawyer’s job better than any other,” she wrote. “I have no talent in the arts, but I do write fairly well and analyze problems clearly.”