Hundreds of drivers have been stuck on Interstate 95 in the Fredericksburg area of Virginia since Monday morning following a period of heavy snow that swept across the region.

Hundreds of drivers were stranded for hours this week along a stretch of one of the country’s biggest interstate highways in Virginia, and transportation officials said the reason it took so long to clear the roads was an inability to pretreat them before the winter weather hit.

Drivers were stranded on I-95 overnight Monday into Tuesday when a major snowstorm hit the region. The issues began earlier Monday with a major crash involving several tractor-trailers. Traffic along a 50-mile stretch of the interstate came to a standstill shortly after, centered around the Fredericksburg area.

The problems mounted throughout the day as the snow fell at a rate of up to 2 inches an hour, according to Marcie Parker, a Virginia Department of Transportation (VDOT) engineer leading the effort to clear the interstate.

"That was entirely too much for us to keep up with," Parker told reporters. "Consequently, with the amount of traffic that we had on the interstate, the trucks and the cars couldn’t make it up and down the hills because we had too much snow and ice out there." 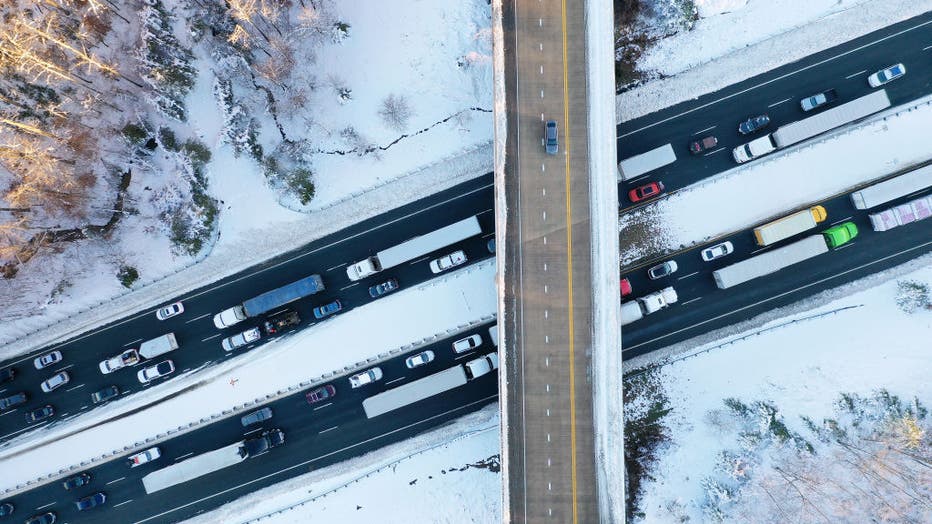 In an aerial view, traffic creeps along Virginia Highway 1 after being diverted away from I-95 after it was closed due to a winter storm on Jan. 4, 2022, near Fredericksburg in Stafford County, Virginia. (Photo by Chip Somodevilla/Getty Images)

Lanes in both directions eventually became blocked across an approximately 40-mile stretch of I-95 north of Richmond. As hours passed and night fell, drivers posted messages on social media about running out of fuel, food and water. One of those stuck in the gridlock was Sen. Tim Kaine, D-Va.

How are roads pre-treated in Virginia?

Transportation officials take several steps to make the roadways safer when snow or an ice storm is predicted. This includes anti-icing in which chemicals are applied to the roads as a preventative measure.

Pre-treatment is a form of anti-icing, where chemicals are applied to the road up to 48 hours before a winter storm to
prevent a bond from forming between the pavement and the snow and ice when the storm starts, according to VDOT.

Sodium chloride and calcium chloride in dry form are used for de-icing — or the practice of removing snow and ice once it has bonded to the pavement — but can be used in some cases for anti-icing, officials say.

The transportation department’s anti-icing program covers at least 200 miles of roads in each of its nine districts across the state. VDOT also sends anti-icing crews to major bridges, overpasses and areas prone to freezing to keep ice from forming, it says.

Why couldn’t VDOT pretreat the roadways along I-95?

Because this week’s storm began with rain, crews could not pretreat the roads.

"The rain would have washed all of our chemicals and salt off the roads and provided no additional protection," said Stephen Birch, the state’s commissioner of highways, during an afternoon news briefing.

State police had warned people to avoid driving unless absolutely necessary, especially as colder nighttime temperatures set in. Up to 11 inches of snow fell in the area during Monday’s blizzard, according to the National Weather Service.

Some traffic cameras were also knocked out by power outages this week, adding to the issues. Parker said the position of the traffic backups in relation to the interstate's express lanes meant they were not of much use to clear the logjams.