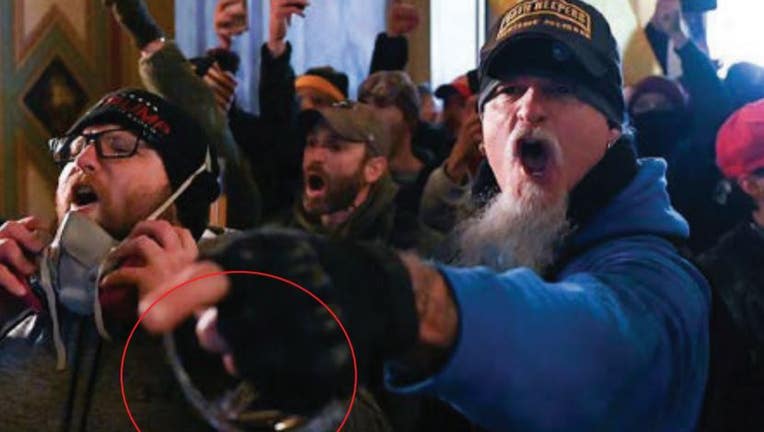 WASHINGTON - A heavy metal guitarist and founder of the outfit Iced Earth is facing federal charges after he allegedly used a bear spray irritant on a police officer during a riot at the U.S. Capitol.

Jon Ryan Schaffer turned himself in Sunday after he was featured on an FBI poster seeking the public's help in identifying rioters, said Chris Bavender, a spokeswoman for the FBI’s Indianapolis office.

He has been charged with several felony counts, including engaging in an act of physical violence and knowingly entering or remaining in any restricted building or grounds without lawful entry.
It wasn't immediately known if Schaffer, a central Indiana native who is a member of the band "Iced Earth," had a lawyer who could speak on his behalf and online federal court records Monday didn't yet list his case.

READ MORE: Capitol rioter threatened to shoot his kids if they told FBI about DC trip

The Indianapolis Star reported that Schaffer had been sought after, according to a federal statement about his case, he was seen in photographs and on video "engaging in verbal altercations with Capitol Police inside the Capitol building" and holding a container of bear spray that's sold by outdoor retailers.

Schaffer is a supporter of President Donald Trump who has voiced various conspiracy theories, once telling a German news station that a shadowy criminal enterprise is trying to run the world under a communist agenda and that he and others are prepared to fight, with violence.

According to a statement filed in federal court by an FBI agent, Schaffer "has long held far-right extremist views." The statement said that: "During an interview in 2017, Schaffer ... referred to the federal government as a ‘criminal enterprise.’ During that same interview, Schaffer stated that the 2016 presidential election was ‘rigged.’"

Thousands of Trump supporters poured into the Capitol on Jan. 6 after a rally in which Trump and others repeated unsubstantiated claims that the election that he lost to former Vice President Joe Biden was rigged against him. People across the country are charged in the riot.

Four of Schaffer’s "Iced Earth" bandmates put out a statement on Instagram and Facebook condemning the violence that rioters were involved in, saying: "We hope that all those involved that day are brought to justice to be investigated and answer for their actions."