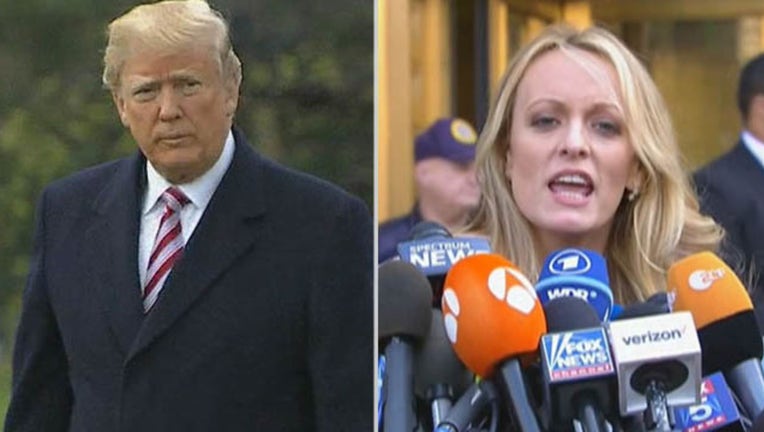 During an appearance on Fox News Channel's "Hannity," Trump lawyer Rudy Giuliani said the money to repay Michael Cohen had been "funneled ... through the law firm and the president repaid it."

Trump told reporters several weeks ago that he didn't know about the payment to Daniels as part of a non-disclosure agreement she signed days before the 2016 presidential election.

Asked aboard Air Force One whether he knew about the payment, Trump said flatly: "No." Trump also said he didn't know why Cohen had made the payment or where he got the money.

The White House did not immediately respond to a request for comment Wednesday.

Giuliani, who joined Trump's legal team last month, said the president had repaid Cohen over several months, indicating the payments continued through at least the presidential transition, if not into his presidency. He also said the payment "is going to turn out to be perfectly legal" because "that money was not campaign money."

"Mr. Trump evidently has participated in a felony and there must be serious consequences for his conduct and his lies and deception to the American people," he said.

Giuliani made the statements to Fox host Sean Hannity, who has his own connection to the case. It was recently revealed in court that Hannity is one of Cohen's clients. Hannity has described his personal dealings with Cohen as centered on real estate advice and said that it "never rose to any level that I needed to tell anyone that I was asking him questions."

Daniels, whose legal name is Stephanie Clifford, says she had a sexual encounter with Trump in 2006 and was paid to keep quiet as part of a nondisclosure agreement she is now seeking to invalidate. She has also filed a defamation suit against Trump after he questioned a composite sketch she released of a man she says threatened her to stay quiet about the encounter with Trump.

The White House has said Trump denies having a relationship with Daniels.

The revelation from Giuliani came as Cohen is under escalating legal pressure. He is facing a criminal investigation in New York and FBI agents raided his home and office several weeks ago. The FBI was seeking records about the nondisclosure agreement.

Daniels' lawsuit over the hush deal has been delayed, with the judge citing the criminal investigation underway.