President Biden remarks on 100M vaccinated ahead of schedule

President Joe Biden gave his remarks on 100 million people who have been vaccinated ahead of schedule, but stressed we still have a long way to go.

Gibraltar, the tiny British overseas territory home to 33,000 people, is poised to become the first nation to fully vaccinate its adult population against COVID-19.

British Health Secretary Matt Hancock congratulated Gibraltar on Thursday for its successful vaccination drive while speaking to the House of Commons, saying it had become "the first nation in the world to complete its entire adult vaccination program."

"I want to pay tribute to all Gibraltarians for their fortitude during this crisis and the kind words of first minister Fabian Picardo, who said yesterday, ‘the United Kingdom has played a blinder on vaccinations and we are among the beneficiaries in the British family of nations,’" Hancock added.

Gibraltar Chief Minister Fabian Picardo, who Hancock referenced in his remarks, later clarified and said the territory was just "hours away" from fully vaccinating its entire population and would make that achievement soon, according to the local Gibraltar Chronicle.

"What I said [earlier this week] was that we will be the first nation to be fully vaccinated, not that we are," Picardo told the Gibraltar Parliament also on Thursday. "But I think we are hours away." 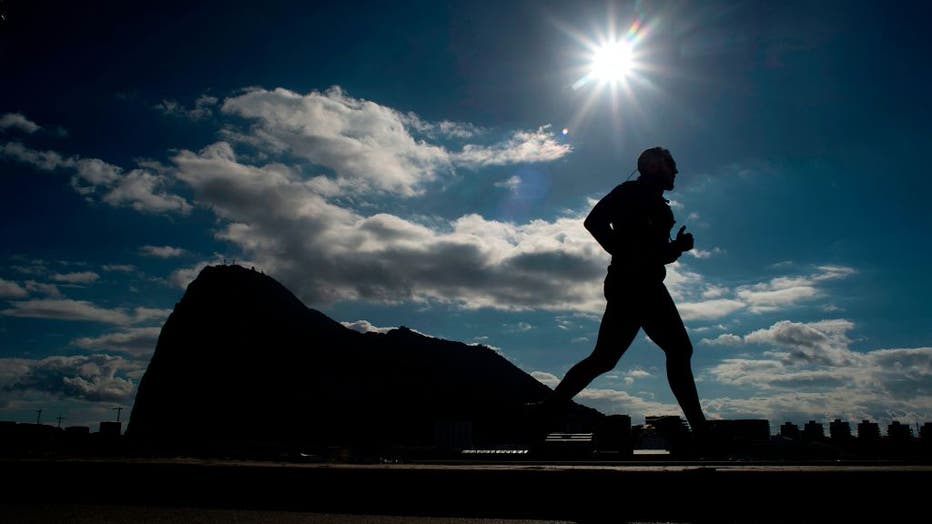 FILE - A man runs past the Rock of Gibraltar in La Linea de la Concepcion on Jan. 4, 2021. (Photo by JORGE GUERRERO/AFP via Getty Images)

The narrow territory stretching between Spain and the mouth of the Mediterranean Sea has benefited from a steady stream of COVID-19 vaccine doses imported from Britain, mostly the Pfizer-BioNTech jab — a two-dose vaccine for ages 16 and up.

Earlier this month, Health Minister Samantha Sacramento told the Associated Press that only 3.5% of residents over 16 had rejected the vaccine.

Despite the mixed messaging, Picardo said he was "glad to hear" Hancock mention Gibraltar’s vaccination rollout effort, which includes its vast imported workforce, and thanked the U.K. for its steady supply of vaccine doses.

Since the onset of the outbreak, Gibraltar has reported 4,270 confirmed cases of COVID-19 and 94 virus-related deaths, data from the World Health Organization shows. Nearly all of Gibraltar’s COVID-19 deaths happened in January and February of this year amid a devastating virus surge with new virus variants, according to the Associated Press.

But the tiny territory with an area of only 3 square miles — only a little bigger than The Vatican and Monaco —  has been successful in its vaccination campaign and has started easing restrictions in what Gibraltar authorities dubbed "Operation Freedom."

Gibraltar has issued vaccination cards to people who have been fully vaccinated and is also developing an app storing vaccine data and test results that authorities want to link with other platforms elsewhere to revive international travel.

In nearby Spain, restrictions have tamed an end-of-the-year coronavirus surge that overwhelmed public hospitals. But, like much of the European Union, Spain is still struggling with a slow vaccine rollout in the effort to immunize 33 million residents or 70% of its population.