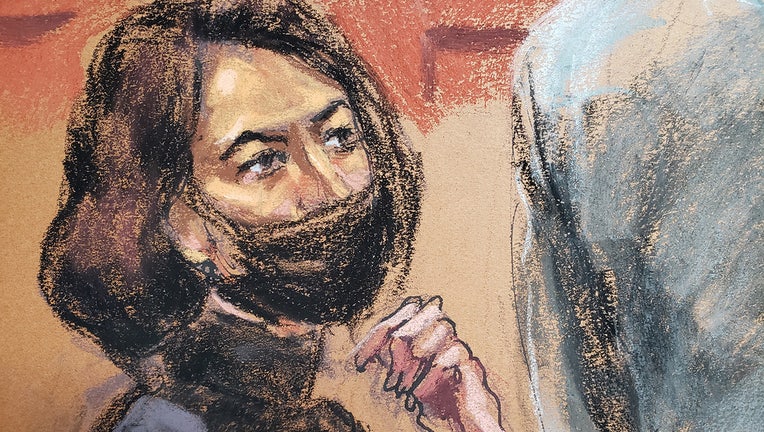 NEW YORK - Ghislaine Maxwell, convicted last week of conspiring to recruit and groom teenage girls to be abused by Jeffrey Epstein, plans to request a new trial after a juror in her case revealed he was a victim of sexual abuse, her defense lawyers said Wednesday.

The lawyers said in a letter to U.S. District Judge Alison J. Nathan that "based on undisputed, publicly available information, the Court can and should order a new trial without any evidentiary hearing."

The judge late Wednesday set a schedule for the defense to ask for a new trial, saying it should make the request by Jan. 19, with prosecutors replying by Feb. 2.

She asked them to address whether "an inquiry of some kind" is permitted or required. Nathan also said she will offer a court-appointed lawyer for the juror.

The judge's order came after defense lawyers said Maxwell "intends to request a new trial" with a submission that will include all known undisputed remarks of the juror, along with recorded statements and the questionnaire all jurors filled out.

"It is clear to Ms. Maxwell that based on this record alone a new trial is required," they said, urging that all trial jurors be examined to evaluate their conduct if a hearing occurs.

In interviews published Tuesday and Wednesday by The Independent and the Daily Mail, one juror described a moment during the deliberations when he told fellow jurors in Maxwell's trial that, like some of the victims of the late financier Epstein, he had been sexually abused as a child. And he said he convinced other jurors that a victim's imperfect memory of sex abuse doesn't mean it didn't happen.

"I know what happened when I was sexually abused. I remember the color of the carpet, the walls. Some of it can be replayed like a video," he said he told the jury, according to The Independent. "But I can't remember all the details, there are some things that run together."

The judge denied a request by another defense lawyer who wrote a separate letter asking her to suspend all other post-trial motions in the case.

In their own letter to Nathan, even prosecutors said those reports "merit attention by the Court." The juror was identified only by his first and middle name in the articles.

Prosecutors suggested in their letter that Nathan schedule a hearing in about one month, along with a schedule for lawyers to file briefs regarding the applicable law and the scope of the hearing.

"The Government respectfully submits that any juror investigation should be conducted exclusively under the supervision of the Court," prosecutors wrote.

Potential jurors in Maxwell's case were asked to fill out a questionnaire asking: "Have you or a friend or family member ever been the victim of sexual harassment, sexual abuse, or sexual assault?"

Quoting from the press reports, prosecutors said the juror asserted that he "flew through" the questionnaire and didn't recall being asked if he'd been a victim of sex abuse.

Epstein killed himself in jail in 2019 as he awaited a sex trafficking trial.

No sentencing date has been set after the conviction of Maxwell, 60, and she is still facing trial on perjury charges.