ORLANDO, Fla. - Getting delayed at the airport isn’t exactly the recipe for a happy traveler, but one airline employee working at a gate in Orlando did their best to liven up an otherwise dreary situation.

Kristin Dundas of Windermere, Florida, was scheduled to fly Thursday from Orlando to Washington D.C. for a weekend trip when her Southwest Airlines flight was delayed due to weather.

Instead of getting irritated, Dundas found herself actually enjoying her experience at the gate.

“My flight to Washington DC has been delayed for almost 2 and a half hours and I was getting HEATED until this gate agent started playing games with everyone waiting to pass the time and now I’m like I’ll wait all d--- night if you keep this up,” she tweeted.

Dundas said the gate agent held a contest for the “worst driver’s license picture,” in addition to a paper airplane contest and providing updates about the flight in “animated ways.” 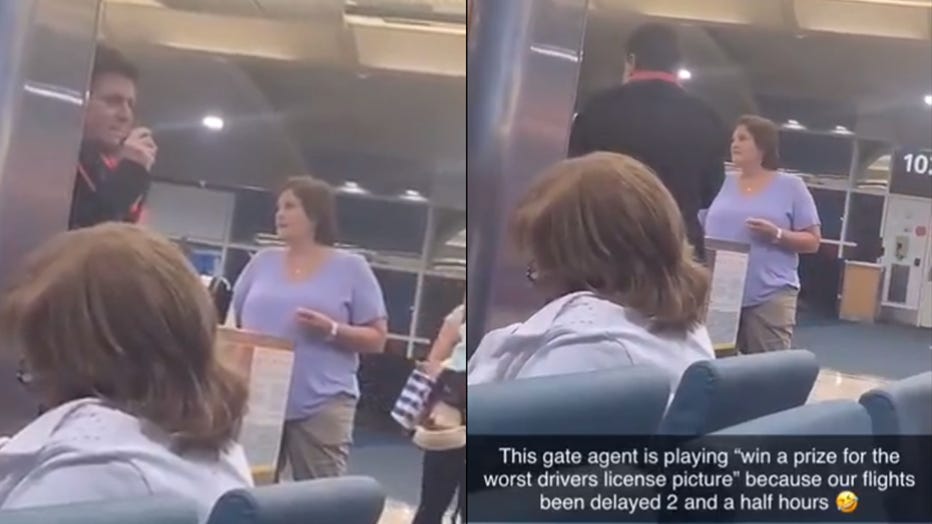 In a reply to Dundas’ post on Twitter, a Southwest Airlines representative responded: “I'm glad our Agent was able to make the delay a little more bearable for y'all, Kristen! We hope to have you on your way ASAP.”

Scheduled for a “super short” weekend trip, Dundas said she was originally annoyed at the delay — along with other passengers at the gate who feared the flight would be cancelled.

“Once they started playing the games pretty much everyone was laughing and enjoying the contest,” she said. “Quite a few people participated in the driver’s license game and the paper airplane contest. It was super creative.”

Dundas added that the winners were awarded $25 vouchers and Southwest Airlines merchandise.

“Our employees are known for showcasing their hospitality in many ways including having fun with our customers,” Southwest Airlines spokesperson Dan Landson said in a statement. “In this video, one of our Orlando-based customer service agents was helping turn an otherwise routine weather delay into a fun evening by playing a variety of games with customers in the gate area. As you can tell, our customers enjoyed the experience.”