A satellite monitoring agency has recorded more than 41,000 fires in the Amazon region so far this year - with more than half of those coming this month alone.

The announcement came from French President Emmanuel Macron, the host of this year's meeting of G-7 leaders, and the Chilean President Sebastián Piñera. Macron said that the Amazon represents the "lungs" of the planet and that leaders were studying the possibility of similar support in Africa, also suffering from fires in its rainforests.

Macron said the U.S. supported the initiative, although he acknowledged that U.S. President Donald Trump had skipped Monday's working session on the environment. 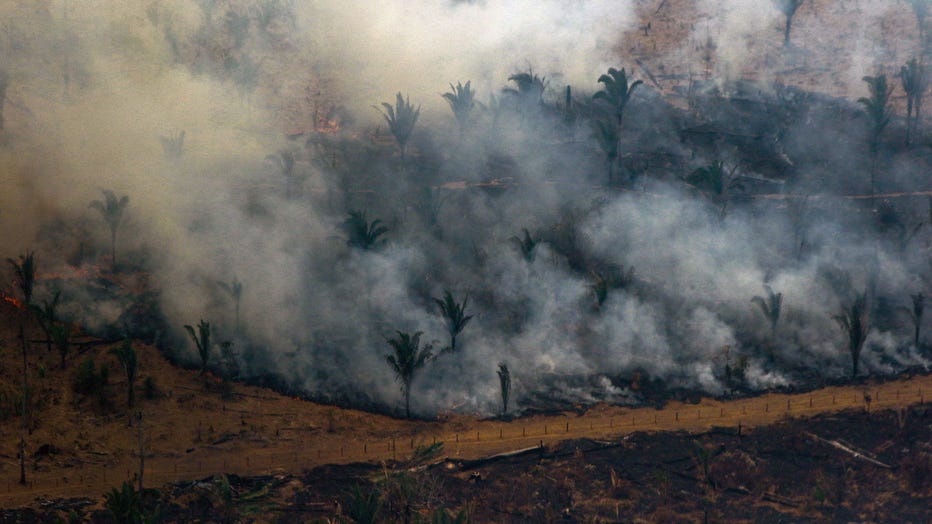 Aerial view showing smoke billowing from a patch of forest being cleared with fire in the surroundings of Boca do Acre, a city in Amazonas State, in the Amazon basin in northwestern Brazil, on August 24, 2019. (Photo by LULA SAMPAIO / AFP)

Brazil's federal police agency announced Sunday it would investigate reports that farmers in the state of Para, one of those most affected by the blazes, had called for "a day of fire" to ignite fires Aug. 10.

Related: The causes and risks of the Amazon fires

Pope Francis also added his voice to the chorus of concern over the fires in Brazil, which borders his homeland of Argentina, and urged people to pray so that "they are controlled as quickly as possible." He told a crowd in St. Peter's Square that "we're all worried" about the Amazon fires. He warned that that green "lung of forest is vital for our planet."

Tensions over Iran, Russia, the U.S. trade war with China and the faltering global economy have mostly dominated the three-day summit, which Trump and Macron will finish with a joint news conference Monday.

This story was reported from Cincinnati. The Associated Press contributed