Kenneth B. Morris Jr. says his wanting to keep the statue in place has to do with the history around it, which includes who paid for it -- and the important speech his great-great-great-grandfather Frederick Douglass gave at the unveiling of the statue.

FOX 5 continues to examine the “Race to Equality,” and has been covering the controversy now surrounding the D.C. statue.

On June 25, the National Park Service erected fencing and barriers around the Emancipation Memorial and one other statue located several feet away from it in Lincoln Park. Nationwide, protesters have targeted, and in some cases, toppled statues found to be offensive.

To be clear, Morris believes all Confederate monuments should be removed.

“I don’t put this statue in the same category as Confederate monuments that were put up in the early 19th century as badges of servitude, badges of white supremacy,” he said in a Zoom interview from the West Coast.

The statue was paid for by formerly enslaved people and sits in the Capitol Hill neighborhood in Southeast. It depicts a clothed Abraham Lincoln standing with a hand over a kneeling freed slave. The other hand is holding the Emancipation Proclamation.

Levey tells FOX 5 the formerly enslaved people who donated to create the statue had “little to no” input on its design. 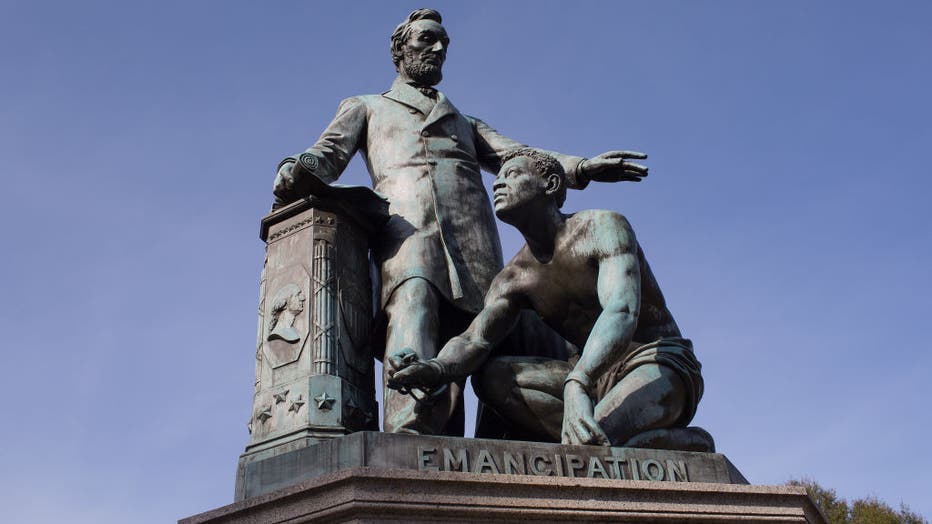 The Lincoln Emancipation Statue sits in Lincoln Park on November 11, 2017 in Washington D.C.'s Capital Hill neighborhood. Paid for by former slaves and placed in the park in 1876, the statue depicts racial attitudes of the 19th century from a norther

“The history behind it is simple and it’s complicated. The simple version is that a formerly enslaved woman in Ohio gave $5 to her former master, her former owner, and asked that it be put towards a monument to Abraham Lincoln. That supported the simple story that got in the newspapers and that caused a lot of people to give money,” said Levey, who tells FOX 5 the more complicated part of that story involves formerly enslaved people seeing a monument to Abraham Lincoln as their way of expressing their joining of white American society during the time of Reconstruction.

The other part of the statue’s history includes its commencement on the 11th anniversary of Lincoln’s assassination.

Morris says in 1876, Frederick Douglass gave one of his most important speeches during his keynote address at the statue unveiling, which happened in front of over 20,000 people and President Ulysses S. Grant.

“He talked about President Lincoln’s failings, he talked about how he was slow to move toward emancipation and he understood that there were issues-problems with that statue. I believe he knew that there would be some criticism,” said Morris.

In that speech, which you can read on the Digital Public Library of America website, Douglass challenged Lincoln’s legacy, noting he was more determined to save the Union, than free enslaved people.

As previously reported, Douglass says in one part: “… truth compels me to admit, even here in the presence of the monument we have erected to his memory, Abraham Lincoln was not in the fullest sense of the word, either our man or our model.” He goes on to call Lincoln a “white man’s President.”

“He could’ve said, ‘I’m not going to speak because this statue, I don’t agree with it, I don’t think it’s a good representation of people of African descent in this country.’ But he also understood, he was strategic, and he understood he had an opportunity to speak to power structure, those who were in power,” said Morris, who added, “And it would be many, many years later, not until the election of President Barack Obama that a Black man of this country would have the platform that Frederick Douglass had that day.”

DC Congresswoman Eleanor Holmes Norton introduced a bill to remove the statue. Marcus Goodwin, running for DC Council, says he wants to see it replaced with one honoring Harriet Tubman.

“…I saw demeaning imagery of Abraham Lincoln standing above a man who is in shackles, on his knees, was not well dressed, and now this has become an allegory for where we are in society because we have a white community whose network in DC is 81-times what it is for the African American family,” said Goodwin, “…I’ve asked for an African American woman because they’ve been horribly under-represented.”

The one statue of an African American woman is located in the same park but several feet away from the Freedman’s Memorial: the Mary McLeod Bethune statue, honoring an educator and presidential advisor.

“The statues are within sight of the U.S. Capitol, so that’s important. That’s a ‘speaking to power,” said Levey, “but why are they on what is today considered the backside of the Capitol, why are they not down on the mall? That’s another good question that’s being asked today?”

Morris, who says he has worked with Holmes Norton on several projects honoring the Abolitionist Frederick Douglass before, has not talked with any D.C. officials yet on his thoughts about the statue yet.

He tells FOX 5 he would like to see another statue or something added alongside it that would tell the story how Black people in America liberated themselves.

“When we look back at the history of this country, Black people self-liberated themselves and that’s not a story that has been told properly,” said Morris.

While at Lincoln Park on Tuesday, FOX 5 also spoke with Don Folden who runs “Capital Buddy Tours.” Folden gives walking tours (and digital tours) of Black history throughout D.C. The Emancipation Memorial at Lincoln Park is one of his stops.

Folden told FOX 5 the statue should remain, and be turned back toward the U.S. Capitol’s Freedom Statue. Folden says the “Freedman’s Memorial” was turned when the Mary McLeod Bethune Statue was completed so it did not look as though the statue was facing Lincoln’s back.

“And that’s just not any statue of a Black man,” Folden said passionately, “That’s Archer Alexander, the last slave captured under the Fugitive Slave Act, which means he’s the first Black man in the world to have a statue in America. But you want to tear that down? Turn it back to its original position, so it’s facing freedom.”