In DC, an Abraham Lincoln statue is facing calls for its removal.

FOX NEWS - A controversial statue in Washington, D.C., and replicated in Boston, has a history that many people who currently oppose the statues might not know, according to reports.

Both statues depict President Abraham Lincoln standing over a kneeling black man who is newly freed from slavery. Critics of the statues claim the image communicates the black man's subservience -- and have called for the statues in both cities to be removed.

But the idea for the statue started with a formerly enslaved woman who wanted to pay homage to Lincoln after he was assassinated in 1865, according to the National Park Service.

Charlotte Scott, of Virginia, used the first $5 she earned after being freed from slavery to launch a fundraising campaign, the park service said.

Other funds were collected exclusively from formerly enslaved African-Americans, even though the organization running the effort and maintaining the funds was a white-run, war-relief agency based in St. Louis, called the Western Sanitary Commission, the park service said.

"The campaign for the Freedmen's Memorial Monument to Abraham Lincoln, as it was to be known, was not the only effort of the time to build a monument to Lincoln; however, as the only one soliciting contributions exclusively from those who had most directly benefited from Lincoln's act of emancipation, it had a special appeal," the park service said. 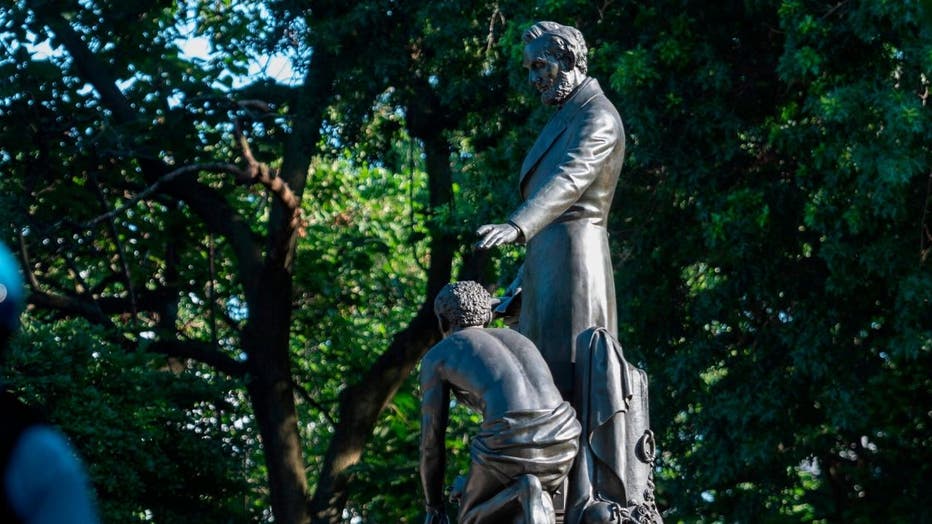 As the wave of anti-racism protests rocking the United States brings down monuments to figures linked to the country's history of slavery, the spotlight is shifting to other prominent people long considered untouchable. (ANDREW CABALLERO-REYNOLDS/AFP via Getty Images)

The monument, which was designed by Thomas Ball, was cast in Munich in 1875 and shipped to Washington in 1876.

Boston’s statue, located in Park Square, and has drawn ire from some residents, prompting the Mayor Marty Walsh to announce he favors removing it.

Walsh said he was "willing to engage in a dialogue with the community about its future in Boston," WCVB-TV in Boston reported.

Tory Bullock started an online petition for the Boston statue's removal that has already garnered more than 10,000 signatures.

"I've been watching this man on his knees since I was a kid," Bullock writes in the petition description. "It's supposed to represent freedom but instead represents us still beneath someone else. I would always ask myself, 'If he's free, why is he still on his knees?' No kid should have to ask themselves that question anymore."

In Washington on Thursday, the park service erected a barrier and deployed police around the statue  as protesters vowed to hold a demonstration at the monument.On Wednesday, Eleanor Holmes Norton, D.C.'s non-voting House delegate, announced she will introduce legislation to remove the statue from Lincoln Park, Washington's WJLA_TV reported.

RELATED: President Trump says he has authorized arrest of anyone vandalizing monuments, statues or federal property

“Although formerly enslaved Americans paid for this statue to be built in 1876, the design and sculpting process was done without their input, and it shows," Norton’s statement said.

"The statue fails to note in any way how enslaved African Americans pushed for their own emancipation. Understandably, they were only recently liberated from slavery and were grateful for any recognition of their freedom. However, in his keynote address at the unveiling of this statue, Frederick Douglass also expressed his displeasure with the statue," she said.