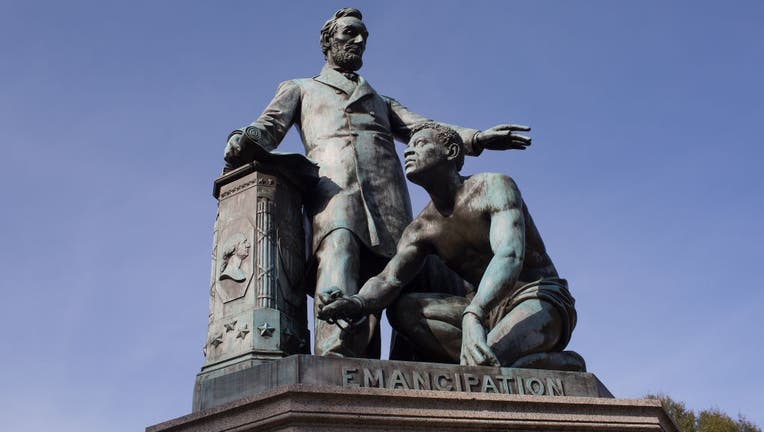 WASHINGTON, D.C. - NOVEMBER 11: The Lincoln Emancipation Statue sits in Lincoln Park on November 11, 2017 in Washington D.C.'s Capital Hill neighborhood. Paid for by former slaves and placed in the park in 1876, the statue depicts racial attitudes of

The scene shows former President Abraham Lincoln standing over a kneeling, un-clothed African-American slave who has broken chains on his feet and hands.

"You will soon see my bill to remove this problematic statue from Lincoln Park," Nortan said in a statement.

Norton said the statue fails to note how enslaved African Americans pushed for their own emancipation.

"Understandably, they were only recently liberated from slavery and were grateful for any recognition of their freedom, she said. "However, in his keynote address at the unveiling of this statue, Frederick Douglass also expressed his displeasure with the statue.

The Emancipation Memorial was dedicated on April 14, 1876, the anniversary of President Abraham Lincoln's assasination. Frederick Douglass spoke at the unveiling.

“Because Lincoln Park is National Park Service (NPS) land, I will work with the NPS to see whether NPS has the authority to remove the statue without an act of Congress, and if so, we will seek its removal without a bill, Norton stated. "This statue has been controversial from the start. It is time it was placed in a museum.”

In DC, an Abraham Lincoln statue is facing calls for its removal.

A replica of the statue is located in Boston, and Mayor Marty Walsh is considering removing it.