The disgraced former mayor of Baltimore who resigned amid investigations into deals to sell her self-published children's books has been charged with fraud and tax evasion.

BALTIMORE - The disgraced former mayor of Baltimore has been charged with fraud and tax evasion involving sales of her self-published children's books.

An 11-count federal indictment unsealed Wednesday accuses Catherine Pugh of using her "Healthy Holly" children's books to enrich herself, promote her political career and fund her run for mayor. 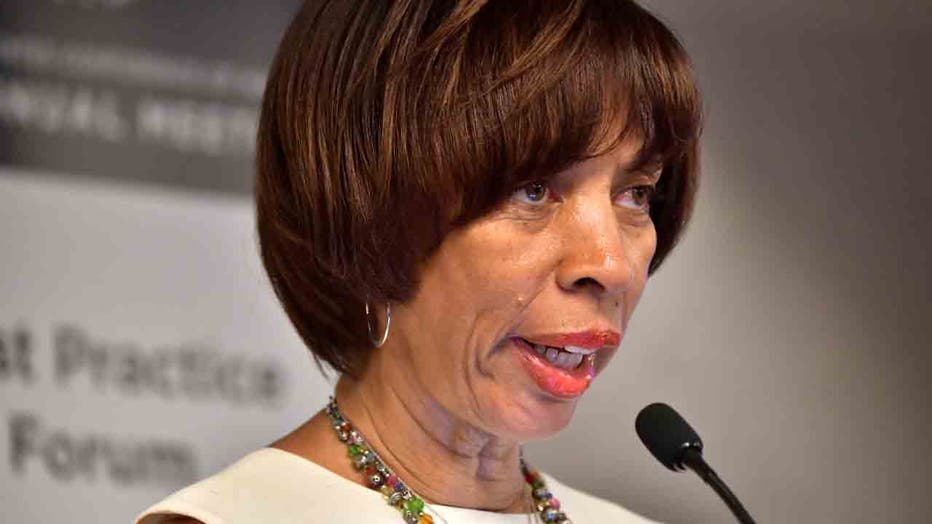 Baltimore Mayor Catherine Pugh speaks at a session on Housing Affordbility the US Conference of Mayors on June 8, 2018 in Boston, Massachusetts. (Photo by Paul Marotta/Getty Images)

The U.S. Department of Justice said the grand jury indicted Pugh on federal charges of conspiracy to commit wire fraud, seven counts of wire fraud, conspiracy to defraud the United States, and two counts of tax evasion. She's expected to surrender to U.S. Marshals before an initial appearance and arraignment Thursday before U.S. District Judge Deborah K. Chasanow in Baltimore.

"Corrupt public employees rip off the taxpayers and undermine everyone's faith in government," United States Attorney Robert K. Hur said in an announcement of the charges. "Our elected officials must place the interests of the citizens above their own."

The disgraced former mayor of Baltimore has been charged with fraud and tax evasion involving sales of her self-published children's books.

Pugh resigned in early May after authorities began probing whether she arranged bulk sales of "Healthy Holly" books to disguise hundreds of thousands of dollars in kickbacks.

FBI and IRS agents raided her offices, homes and other locations in late April and seized several items, including money transfer receipts, a laptop, compact discs and a $100,000 check from the University of Maryland Medical System to Pugh's "Healthy Holly" company.

Pugh has been in seclusion since early April, when she took a leave from the mayor's office due to what her lawyer described as poor health following a bout of pneumonia. Attorney Steven Silverman at that time asserted that Pugh was so fragile physically and mentally that she was unable to make "major decisions."

Federal, state and local probes have been looking into questionable financial arraignments that over the years netted Pugh roughly $800,000 for her hard-to-find books. The books were meant to be provided to schools and day care centers, but it's unclear where tens of thousands of copies ended up.

The Democrat became mayor in late 2016 after having served in the state legislature since 2005. As a state senator, she once sat on a committee that funded the University of Maryland Medical System, one of the state's largest private employers.

The hospital network -- on whose board she sat starting in 2001 and until the scandal over the illustrated paperbacks erupted in March -- was Pugh's biggest book customer.

The system paid Pugh $500,000 for 100,000 copies. There was no contract behind the deal and the medical system described some of the purchases as "grants" in federal filings. She returned her most recent $100,000 payment and described the deal as a "regrettable mistake" during a news conference days before she retreated from public view.

Health care provider Kaiser Permanente also disclosed that it paid Pugh's Healthy Holly LLC about $114,000 between 2015 and 2018 for roughly 20,000 copies of the books. She oversaw Baltimore's spending board in 2017, when the city awarded a $48 million contract to the Kaiser Foundation Health Plan of the Mid-Atlantic States Inc.

Pugh, 69, became the second mayor of Baltimore in less than a decade to step down because of a scandal. Former Mayor Sheila Dixon left office in 2010 as part of a plea deal for misappropriating about $500 in gift cards meant for needy families.

A longtime city council member, Bernard "Jack" Young, took over the role of mayor after Pugh resigned. He inherited a city with failing schools, a thriving illegal drug market and one of the nation's highest rates of violent crime.