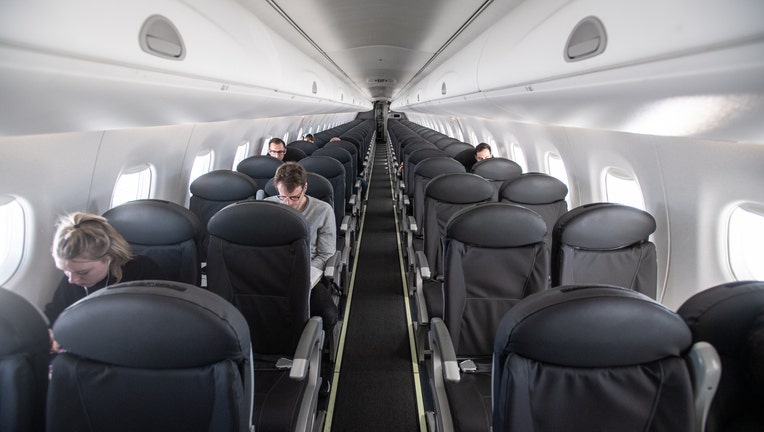 LOS ANGELES - Airlines are slashing flights, offering change fee waivers to customers and freezing hiring as they experience a sharp drop in bookings and a rise in cancellations in the face of the spreading coronavirus.

The International Air Transport Association, an airline trade group, estimates that the outbreak could reduce carriers’ revenue by between $63 billion and $113 billion depending on how far it spreads. The same group said the terror attacks in 2001, which devastated the U.S. airline industry but had less impact overseas, cut revenue by about $20 billion.

RELATED: Should you cancel your trip? CDC urges travelers to avoid several countries impacted by coronavirus

Here is how many of the world’s largest airlines are dealing with the virus:

The Seattle-based carrier says it will reduce capacity by 10 percent in April and 15 percent in May.

The company has also halted hiring and is offering employees unpaid leave of absense for 30, 60 and 90 day time-frames.

In order to account for the gross loss in profit, the airline is suspending $300 million in capital spending as well as suspending all share purchases.

Effective March 7, 2020 Brad Tilden, Chief Executive Officer and Ben Minicucci, President have reduced their base salaries to zero, according to the company.

American Airlines announced March 9 that it would waive change fees for customers who purchased tickets prior to March 1 for travel through April 30.

The company also announced that it would be cancelling several flights to areas most impacted by the novel coronavirus. Services to mainland China, Hong Kong and Italy from various U.S. cities have been suspended through the summer. The airline is also limiting its routes to South Korea and Japan. Many of the cancelled flights won’t resume until late October.

The company announced that it will cut international flying by 10% this summer and reduce U.S. flying by 7.5% in April. It has delayed training of new pilots and flight attendants.

Delta Air Lines will cut passenger-carrying capacity by 40% to deal with a nosedive in travel demand, and it is talking to the White House and Congress about assistance to get through the downturn.

The 40% cut in passenger-carrying capacity is the largest in Delta's history, surpassing reductions that were made after the September 2001 terror attacks.

The company initiated a complete suspension of U.S. to China flights from Feb. 6, through April 30. Flights from the U.S. to Japan and South Korea were also limited while routes leaving various U.S. cities to Italy were postponed.

In an attempt to stop the spread of COVID-19 on its planes, Delta Air Lines unveiled a new cleaning technique called “aircraft fogging,” which involves a handheld fogging machine that sprays disinfectant in and around the seating areas of the plane.

The company also said that it was undertaking “cost reduction initiatives,” such as a company-wide hiring freeze to account for the financial hit they’ve taken as a direct result of the virus.

The airline has also waived travel fees for both international and domestic travelers through April 30 for anyone who purchased a ticket on or before March 9.

United tweeted on March 10 that it would not charge any fees to reschedule travel for customers who purchased a ticket between March 10 and April 30, 2020.

The airline said it expects to lose money in the first quarter for the first time in six years, according to the Associated Press.

The company arranged $2 billion in additional bank credit to raise liquidity from $6 billion to $8 billion. President Scott Kirby said United hopes the outbreak won't be as damaging as 9/11, when bookings plunged 40% for two months before starting to recover, “but we're not willing to count on that.”

The Korean airline has reduced or canceled dozens of flights in and out of South Korea as well as to various cities in the U.S. and around the world.

Refund penalties have been waived for flight cancellations after purchase for customers traveling outside of Southeast Asia, while change fees for anyone traveling to and from the U.S. will also be waived.

Korea’s largest airline has been devastated by the virus. In a memo obtained by Reuters, the airline’s president warned that “if the situation continues for a longer period, we may reach the threshold where we cannot guarantee the company’s survival.”

Southwest Airlines says they will be canceling approximately 1,000 daily flights from Sunday, March 22 until April 14. They will also be suspending service to all their international destinations.

In a release, the airline says they recently implemented a plan to reduce capacity by at least 20 percent from April 14 through June 5. The decision, according to Southwest, was driven by the drop in travel demand in the wake of the COVID-19 outbreak.

The airline said its aircraft undergo over six hours of cleaning every night, posting a video of the cleaning routine on their website along with a step-by-step guide to the process.

Southwest Airlines CEO Gary Kelly said the novel coronavirus outbreak might be worse for airlines than the terror attacks of 2001. An industry trade group believes it will be more damaging.

Kelly said he would cut his own base salary by 10 percent.

The Associated Press contributed to this story. This story was reported in Los Angeles.