WASHINGTON - The FBI is still continuing their hunt for the person who planted pipe bombs outside the offices of the Republican and Democratic national committees the day before the January 6, 2021 insurrection at the U.S. Capitol.

The identity of the suspect has been a mystery since the investigation began. According to the Associated Press, the FBI interviewed more than 900 people, collected 39,000 video files and examined more than 400 leads but is still no closer to finding the person involved. 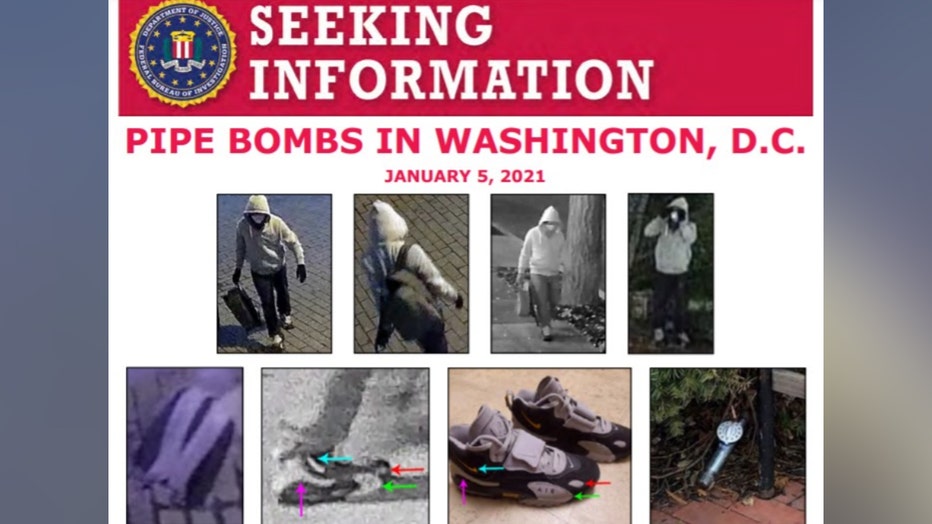 The explosive devices were placed outside the RNC and DNC office buildings between 7:30 p.m. and 8:30 p.m. on Jan. 5, 2021 – approximately 17 hours before thousands of pro-Trump rioters stormed the U.S. Capitol. The bombs weren’t located by law enforcement until the next day.

Authorities were called to the Republican National Committee’s office around 1 p.m. on Jan. 6. About 30 minutes later another call came in for a similar explosive device found at the Democratic National Committee headquarters nearby. The bombs were found to be safe and no injuries were reported.

Last year the FBI released video showing a person in a gray hooded sweatshirt, a face mask and gloves appearing to place one of the explosives under a bench outside the DNC. The video separately shows the person walking in an alley near the RNC before the bomb was placed there. The person wore black and light gray Nike Air Max Speed Turf sneakers with a yellow logo.

The Federal Bureau of Investigation has released new video clips and a map detailing what they believe was the route taken by a suspect who left pipe bombs at both the Republican National Committee’s and Democratic National Committee’s headquarters the night before the Capitol riot.

It is still unclear whether the bombs were related to planning for the insurrection or whether they were unrelated to the deadly riot. Both buildings are within a few blocks of the Capitol.

RELATED: Capitol Riot: A look back on year since January 6 insurrection

The push for anyone with information continues. At a press conference on Thursday – the one-year anniversary of the deadly attack – D.C. Police Chief Robert Contee urged anyone in the District that may have information to come forward.

The Associated Press reports more than 700 people have been charged with federal crimes stemming from the Jan. 6 attack, and arrests are still being made regularly.