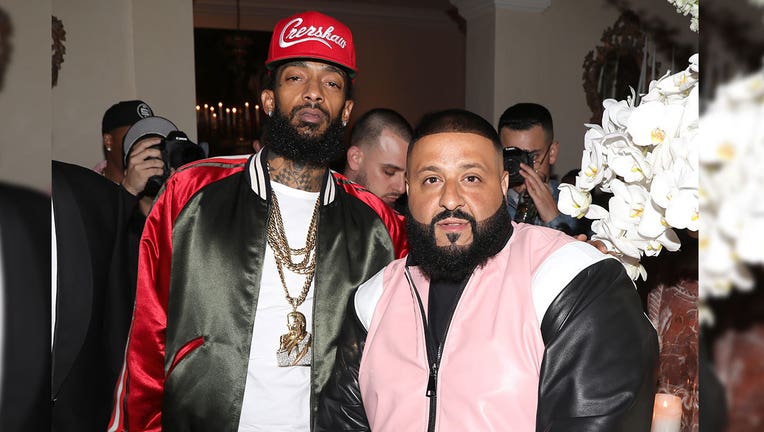 LOS ANGELES (AP) - During the recording of what became one of Nipsey Hussle's final songs, the rapper and DJ Khaled spoke passionately about "our families, entrepreneurship, leadership and just love," Khaled recalls.

The result of the session is "Higher," the latest single from Khaled's new album "Father of Asahd," released Friday. Before Hussle's March 31 death, they filmed a music video for the song, which also features John Legend.

Khaled, 43, is donating all proceeds from "Higher" to Hussle's children, 10-year-old Emani and 2-year-old Kross. The video, also released Friday, was filmed days before Hussle was shot to death in what police said was a personal dispute outside his South Los Angeles clothing store.

"It's sad and so beautiful at the same time," Khaled said of Hussle's passing. "Everybody in the world is representing Nipsey's message, coming together, unifying. That's what Nipsey wanted. The sad part is that he's not here in the physical form to see it. He's such a great man and a great leader. He's like a prophet. The world felt it and the world is coming together to continue his message. The marathon continues. Long live Nipsey Hussle. He's here right now."

Khaled, a king of collaborations, reaches new levels on his 11th album, which features more than 30 guests, including Beyonce, Jay-Z, Cardi B, Justin Bieber, Chris Brown, J Balvin, SZA, 21 Savage, Travis Scott, Chance the Rapper and Post Malone. He performed some of his new music Monday night at the launch event of Pepsi #Summergram on Instagram, which includes hundreds of new AR filters on the social media app.

Grammy-nominated Khaled has more than a dozen Top 40 hits, including smashes like "Wild Thoughts," ″I'm the One" and I'm On One." But he is calling "Father of Asahd" his "best body of work."

"It's inspired by my family and the journey that I've been through to get to where I'm at now," said Khaled, who has regularly listed his 2-year-old son, Asahd, as an executive producer on his albums since he was born.

"We're talking about something that I talked about as a kid," he added of being successful in music. "Look at me -- I'm dropping my 11th album ... I'm recording with the greats, the list goes on. I'm the father of my son, Asahd. I have a beautiful family. God is great."

Though he's accomplished lots of his goals, Khaled still wants more: "I always knew I was going to be a millionaire, now my goal is to be a billionaire."