CDC begs Americans not to travel for Thanksgiving

The nation’s top public health agency is pleading with Americans not to travel for Thanksgiving, or to spend the holiday with people with whom they are not currently living.

DENVER - Despite his own warnings about traveling over the Thanksgiving holiday, Denver Mayor Michael Hancock reportedly boarded a plane to Houston Wednesday, as the Colorado capital sees a record spike in coronavirus cases.

Hancock first boarded a flight to Houston before heading to Mississippi to meet his wife and visit their daughter, according to local reporting by NBC 9 News.

Minutes before his flight, he posted a message on Twitter warning people to “Pass the potatoes, not COVID,” and advised them to “Host virtual gatherings instead of in-person dinners” and “Avoid travel, if you can.”

The mayor’s office could not be immediately reached for comment on his travel plans, but in a statement to the local media outlet, a spokesperson said, “As he has shared, the mayor is not hosting his traditional large family dinner this year, but instead traveling alone to join his wife and daughter where the three of them will celebrate Thanksgiving at her residence instead of having them travel back to Denver.”

“Upon return, he will follow all necessary health and safety guidance and quarantine." 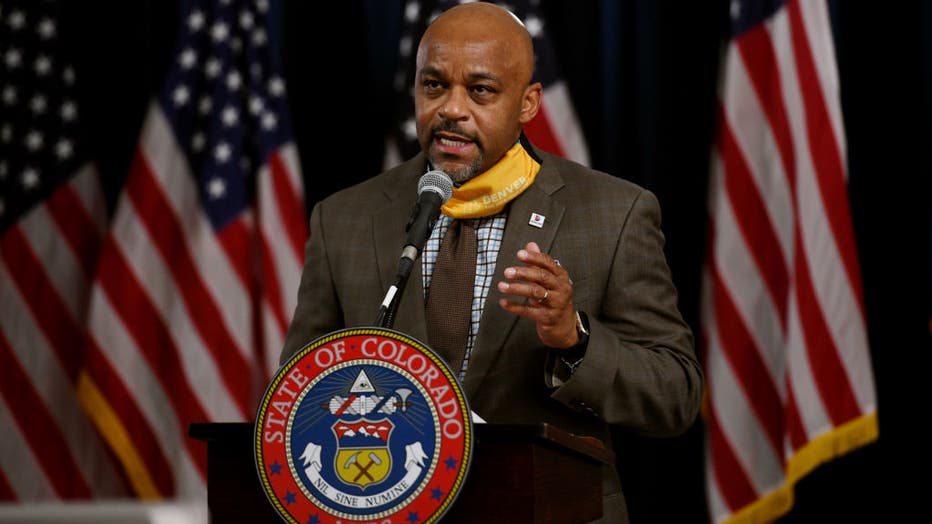 Denver Mayor Michael Hancock and officials announced Denver and a number of other Colorado counties will be moved to Level Red on a newly revamped version of the state"u2019s color-coded COVID-19 dial at Boettcher Mansion in Denver, Colorado on Tuesd

But in an email sent out earlier this month, the mayor reportedly encouraged his staff not to travel and anyone who does will need to quarantine for 14 days if they leave the state – though they will be required to use their own paid leave if their position does not allow them to work from home.

“[A]s the holidays approach, we all long to be with our families in person, but with the continued rise in cases, I’m urging you to refrain from travel this Thanksgiving holiday,” Hancock wrote in an email obtained by 9News. “For my family that means canceling our traditional gathering of our extended family.”

Denver has seen one of the highest number of cases in Colorado, with nearly 34,000 people having contracted the virus and just over 500 deaths since the pandemic started, according to data by Johns Hopkins University.

RELATED: 'You may have to bite the bullet': Dr. Fauci cautions against large Thanksgiving gatherings

Colorado Gov. Jared Polis told reporters Wednesday that he had not spoken with the mayor about his Thanksgiving plans, but said he and his family had cancelled their usual large party plans in an effort to "set example as governor."

Polis said he hadn't seen his parents in nine months due to the pandemic.