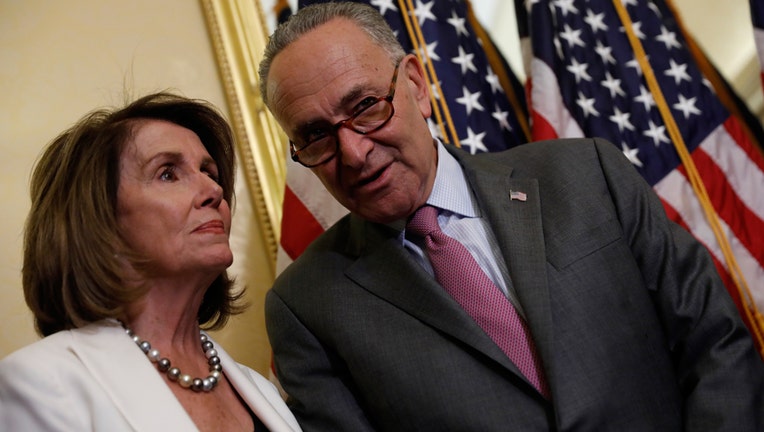 WASHINGTON - If President Donald Trump is serious about strengthening gun laws in the wake of two mass shootings, he should demand that Senate Majority Leader Mitch McConnell put a House-passed bill strengthening background checks up for a vote, congressional Democrats said Monday.

Senate Democratic Leader Chuck Schumer said the Senate GOP leader is blocking gun safety reforms that more than 90% of Americans support. He tweeted that McConnell, R-Ky., should "gavel the Senate into emergency session to take immediate action" on the House-passed bill, which would require federal background checks for all firearms sales and transfers, including those sold online or at gun shows. Another bill allows an expanded 10-day review for gun purchases.

The House approved the bills in February but they have not come up for consideration in the Republican-controlled Senate.

Trump in a statement at the White House condemned weekend shootings in Texas and Ohio that left 30 people dead as barbaric crimes "against all humanity" and called for bipartisan cooperation to respond to an epidemic of gun violence. He offered few specific solutions, but signaled opposition to large-scale gun control efforts, saying, "hatred pulls the trigger, not the gun."

"We vow to act with urgent resolve," Trump said.

Trump offered a slightly different message earlier in the day, tweeting that "Republicans and Democrats must come together and get strong background checks, perhaps marrying this legislation with desperately needed immigration reform. We must have something good, if not GREAT, come out of these two tragic events!"

It was not clear how or why he was connecting the issues.

Schumer and House Speaker Nancy Pelosi said Trump's omission of background checks in his White House remarks showed he was already backing away from his morning tweet.

"It took less than three hours for the president to back off his call for stronger background check legislation," the Democrats said in a joint statement. "When he can't talk about guns when he talks about gun violence, it shows the president remains prisoner to the gun lobby and the NRA."

Congress has proven unable to pass substantial gun violence legislation, despite the frequency of mass shootings, in large part because of resistance from Republicans, particularly in the GOP-controlled Senate. That political dynamic seems difficult to change.

Asked about prospects Monday, McConnell spokesman David Popp said he'd "be sure to forward" any additional statements from the GOP leader.

"Enough is enough," Pelosi, D-Calif., said in a statement Sunday. "The Republican Senate must stop their outrageous obstruction and join the House to put an end to the horror and bloodshed that gun violence inflicts every day in America."

Lawmakers are now on recess for summer, but Schumer, D-N.Y., and other Democrats called for an emergency session to consider the gun violence legislation.

Few Republicans spoke out for action. One, Sen. Pat Toomey, R-Penn., who has tried to pass a background check bill since 2013, in the aftermath of the Sandy Hook school shooting, said, "It's time for Congress to act."

Graham said Monday he has reached an agreement with Democratic Sen. Richard Blumenthal to create a federal grant program to help states adopt "red flag" protection order laws to intervene in situations where there is an imminent threat of violence.

The grants would be given to law enforcement so they can hire and consult with mental health professionals to better determine which cases need to be acted upon, Graham said, adding that while the program allows for quick action, it requires judicial review.

Trump signaled openness to red-flag laws making it easier to take guns away from people believed to be a danger to themselves or others.

Graham and Blumenthal, D-Conn., teamed up on a bill last year to authorize federal red-flag orders but the bill did not come up for a vote in the Senate.

Blumenthal tweeted Sunday that the Senate should come back into session to approve such "common-sense steps to stop gun violence." Addressing McConnell and other leaders, he said, "Now is the time for action, not time away, or time off."