HYATTSVILLE, Md. (FOX 5 DC) - Morgan Wootten, a Hall of Fame basketball coach who built DeMatha High School into a national powerhouse and mentored several future NBA stars during a career that spanned parts of six decades, has died. He was 88.

The school announced his death on Twitter, writing, “The Wootten Family is saddened to share the news that their loving husband and father Morgan Wootten passed away" on Tuesday night surrounded by his family.

Wootten coached DeMatha, a private Catholic school in Hyattsville, from 1956 to 2002. He went 1,274-192 and retired as the winningest high school coach in history, although he now ranks second. 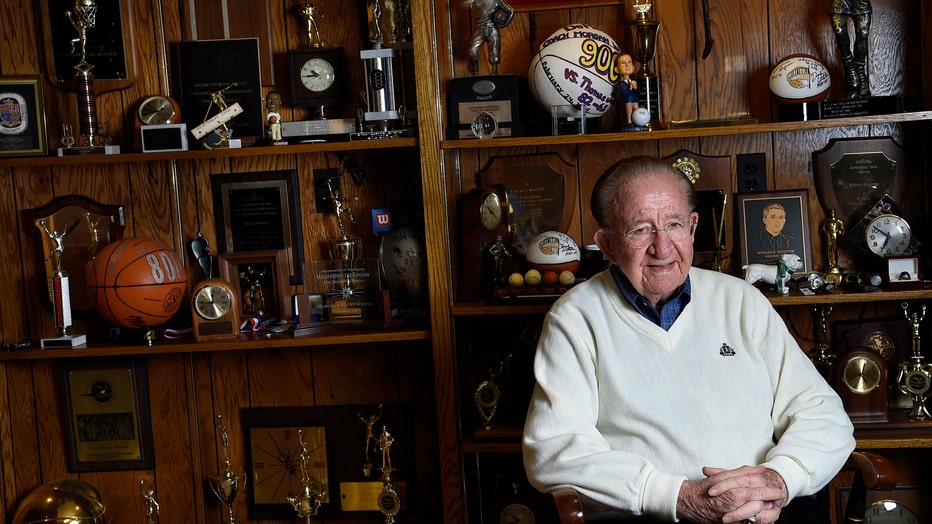 Wootten never had a losing season and won at least 30 games on 10 different occasions.

"If you're in basketball and you don't now Morgan Wootten, there's something wrong with you," North Carolina coach Roy Williams once said.

DeMatha had already earned recognition as one of the top basketball programs in America before Wootten led the Stags into a game in 1965 against Power Memorial, which was led by future NBA star Lew Alcindor and was riding a 71-game winning streak, including a victory over DeMatha one year earlier.

Before a sellout crowd at Cole Field House on the campus of the University of Maryland, DeMatha limited Alcindor to 16 points and prevailed 46-43.

"It put high school basketball on a national level," Wootten said of the much-publicized matchup.

Wootten, who was born in Durham, North Carolina, on April 21, 1931, was inducted into the Naismith Memorial Basketball Hall of Fame in 2000. He was introduced at the ceremony by Red Auerbach, the Hall of Fame coach of the Boston Celtics who died in 2006.

"Morgan Wootten had it all," Auerbach said. “He loved the game, he loved the kids, he was a teacher. He's always in command, without being loud or brash.”

Wootten would raise his voice when necessary, but his approach relied more on positive reinforcement.

"True basketball coaches are teachers," he said. "If you humiliate or curse them, that won't do it. Coaches like that are not coaches."

Wootten launched the careers of a number of players who went to the NBA, including Adrian Dantley, Danny Ferry, Sidney Lowe and Kenny Carr.

Dereck Whittenburg, who played under Wootten at DeMatha before starring for North Carolina State and becoming a college coach, spent years making a documentary about Wootten called "The Godfather of Basketball."

Before Wootten arrived at DeMatha, the school had dropped out of the Washington Catholic League because it could not compete against bigger, better teams with far more talented athletes.

“We can change that,” said Wootten, who abandoned his plan to be a lawyer in favor of this low-paying but satisfying job.

"If I can pay the bills, I'm happy," said Wootten, who never regretted his decision.

"I fell in love with coaching. I loved interacting with young people, having the opportunity to make a tremendous impression on them," he said.

DeMatha went 22-10 in his first season, and he helped integrate the school three years later. Two years after that, the Stags were the top-ranked team in the Washington, D.C., area.

Not surprisingly, Wootten received head coaching offers from several colleges. He spurned North Carolina State and others. His goal was to coach Maryland, his alma mater, and Wootten was seemingly in the mix in 1986 after Lefty Driesell was fired following the death of Len Bias.

The phone never rang. Bob Wade, then coach at Dunbar High in Baltimore, got the job. Though terribly disappointed, Wootten said, “I believe everything happens for a reason.”