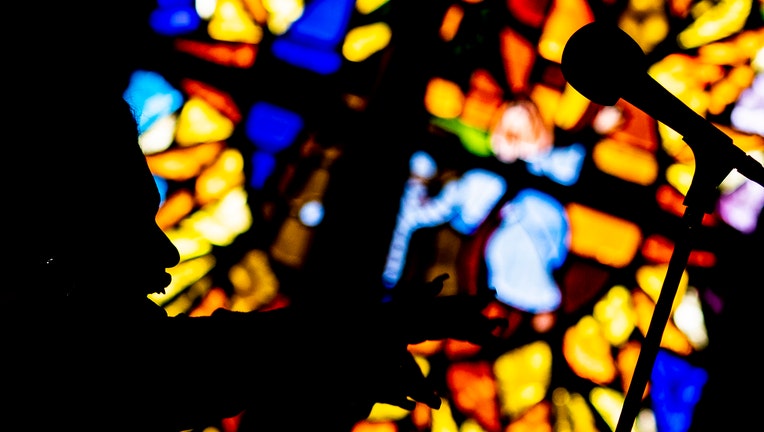 A view from inside Easter Sunday morning services at The Friendship Baptist Church on April 12, 2020 in Baltimore, Maryland. - The church pastor, Alvin Gwynn, has decided to keep his church open for Easter Sunday despite an order from Maryland Govern

BALTIMORE - A prominent Baltimore pastor plans to hold two services for 250 people each Sunday, defying an executive order from the city’s mayor that extended stay-at-home directives.

The Rev. Alvin Gwynn Sr., pastor of Friendship Baptist Church in northeast Baltimore, told The Baltimore Sun he will not comply with the city’s order that limits gatherings to no more than 10 people. He said his congregation will follow social-distancing guidelines and the 500-seat church will be at 50% capacity.

“I don’t know what the mayor’s trying to do,” Gwynn said. “He wants to have a knock-down about First Amendment rights? He’s the mayor, not the pastor of churches in the city.”

On Friday, Maryland businesses began a gradual reopening of retail and personal services as a stay-at-home order issued by Gov. Larry Hogan about six weeks ago in response to the coronavirus ended, though the governor left flexibility for counties to decide how much they want to reopen. Baltimore is among the jurisdictions in the state that are not easing restrictions.

Under the governor’s stage-one reopening, churches and houses of worship can begin holding religious services at up to 50% capacity with outdoor services strongly encouraged.

Gwynn said his church has about 800 members.

Neither the mayor’s office nor the police department responded to the newspaper’s requests for comment on Gwynn’s plans.

Gwynn’s decision contrasts with that of most houses of worship in the area, which have decided to remain closed, including megachurches Empowerment Temple AME Church in Baltimore and Grace Christian Fellowship in Timonium. Both are offering live-streamed services.

In accordance with Mayor Bernard C. “Jack” Young’s directive, the Archdiocese of Baltimore won’t allow more than 10 people in parishes. But Sunday mass services will not resume before the end of the month.

RELATED: What phase 1 of Maryland reopening means for you