Cristiano Ronaldo is heading back to Manchester United, the team that turned him into a global superstar.

In a fast-moving deal that stunned the world of soccer, Ronaldo secured a return to Old Trafford on Friday — a day after telling Juventus he no longer wanted to play for the Italian club.

"Welcome back, Cristiano," read a tweet posted by United. Within minutes, the club's official website had crashed.

Ronaldo is 36 years old, a completely different player to the skinny, outrageously skillful 17-year-old winger who first arrived at United from Sporting Lisbon in 2003 with a box of tricks but little end product. In the following six years, he scored 118 goals in 292 appearances and swiftly became one of the most fearsome strikers in the world, winning the first of his five FIFA world player of the year awards.

Ole Gunnar Solskjaer, the current Man United manager, knows that all too well. He was once a teammate of Ronaldo.

"He is the greatest player of all time, definitely," Solskjaer said Friday after Ronaldo's return was sealed. 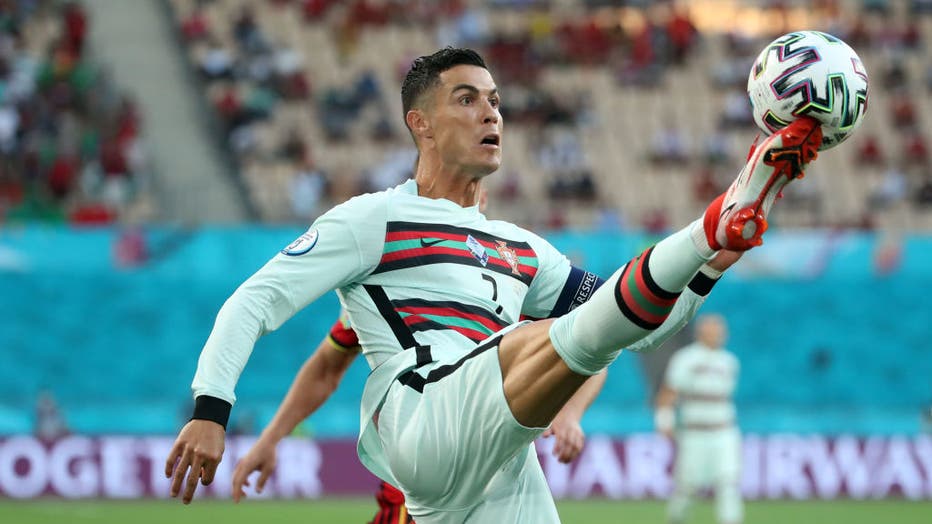 FILE - Cristiano Ronaldo of Portugal in action with the ball during the UEFA Euro 2020 Championship Round of 16 match between Belgium and Portugal at Estadio La Cartuja on June 27, 2021, in Seville, Spain. (Photo by Vincent Van Doornick/Isosport/MB M

Ronaldo will join for a fee of 15 million euros ($17. 7 million), with 8 million euros ($9.4 million) in add-ons. The transfer is subject to agreement of personal terms, visa and a medical examination.

It is the latest blockbuster move of the transfer window, coming barely two weeks after Lionel Messi — Ronaldo’s long-time rival — joined Paris Saint-Germain after his contract at Barcelona expired. PSG forward Kylian Mbappe is also the subject of a bid of about 160 million euros ($188 million) from Real Madrid.

Yet Ronaldo returning to United was not long in the making.

Indeed, the team did not expect him to leave Juventus in this transfer window and only made a move when it became clear he would be available.

On Thursday, Ronaldo met with Juventus coach Massimiliano Allegri and told him he wanted to leave the club where he had spent the last three years after joining from Madrid. He had one year left on his contract.

By Friday, Ronaldo was boarding a private jet from Turin to Lisbon, in his native Portugal, and saying the world would soon be made aware of his next move.

By then, United was the clear front-runner after fierce rival Manchester City pulled out of the running for his signature.

"Everyone at the club looks forward to welcoming Cristiano back to Manchester," United said in a brief statement.

Ronaldo soon took to Instagram, saying he gave his "heart and soul for Juventus."

"I’ll always love the city of Turin until my final days," he wrote.

He never won the Champions League with Juventus, like he did with United in 2008 and four times with Madrid, but was the top scorer in Serie A for the last two seasons and scored 101 goals in 134 appearances.

"In the end," Ronaldo said, "we can all look back and realize that we achieved great things, not all that we wanted, but still, we wrote a pretty beautiful story together."

Solskjaer had already dropped hints that United would be trying to sign its former star when speaking at a news conference on Friday, revealing that its playmaker from Portugal, Bruno Fernandes, had been talking to Ronaldo.

Before playing his first game back at United, Ronaldo will feature for Portugal in World Cup qualifiers and has the chance to become the leading scorer in men's international soccer. He has 109 goals for his national team, tied with former Iran striker Ali Daei.

The landscape in English soccer has changed in the 12 years Ronaldo has been away. United and Chelsea were the top teams in the Premier League when he left, but Man City has been the dominant force over the past decade, winning the title five times from 2012.

City had been considering an option to buy Ronaldo after its top target, Harry Kane, said Wednesday he was staying at Tottenham for now. It would have been a controversial move, considering Ronaldo's past links with United, but City manager Pep Guardiola was downplaying the prospect on Friday — about the same time Solskjaer was sounding positive about United's hopes.

It is not the first time United has beaten City to a player that both clubs apparently wanted. Alexis Sanchez joined United in 2018 after appearing to be close to moving to City, while United was prepared to pay 80 million pounds (then $97 million) to sign Harry Maguire from Leicester in 2019 — a sum City didn’t try to match.

United, which hasn't won the Premier League since 2013, has also signed England winger Jadon Sancho and France center back Raphael Varane for a combined cost of about $150 million.

With Ronaldo also now joining the squad, there will be an expectation on Solskjaer to deliver a first trophy of his tenure that began in 2018.

Ronaldo's work rate and pressing might be questionable in the twilight of his career but he remains a reliable and proven scorer. With his five goals and one assist, he won the Golden Boot at this year's European Championship despite only playing four games.

He is likely to share striker duties with another veteran player, 34-year-old Uruguay international Edinson Cavani, with exciting prospect Mason Greenwood — at 19, nearly half Ronaldo's age — set to revert to playing as a wide forward in competition with Marcus Rashford and Sancho.

It is a short-term move by United, no doubt. But one that will shake up the Premier League and generate excitement inside the club's vast fan base.