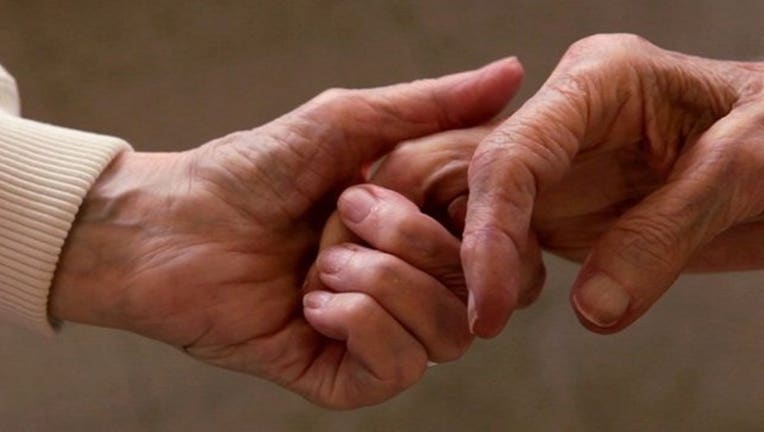 Sensing the couple was close to death, their children pushed their two hospice beds together and gently placed their father's hand in the mother's palm.

"They wanted to go together," their daughter, Donna Scharton, said Thursday. "It was meant to be that way."

The two knew each other as children, growing up in the Central California farming community of Easton. Romance sparked at a local dance hall one night when Floyd, a decorated Navy sailor, was home on shore leave. They were married on Aug. 16, 1947, and while away Floyd showered Violet with affection through love letters the family cherishes.

Returning home for good, the two raised three children on their small farm, growing cotton and raising turkeys. Violet helped on the ranch and kept the house. She prepared breakfast early each morning for her husband, seeing him off to work as a ranch foreman and delivering eggs.

"They were dedicated to each other," Scharton said. "Even other people who met them said they had that connection."

The couple, who had four grandchildren and 10 great-grandchildren, remained active until recently. Around the holidays, the family noticed that Violet's dementia had worsened, and in late January a doctor said Floyd's failing kidneys gave him two weeks to live.

The family moved the couches from the living room of their ranch house, making space for the hospice beds. Cynthia Letson said that after her grandfather passed, they told her grandmother that she could go, too. They told Violet that Floyd was waiting for her.

Letson said her grandparents are a positive example at a time with too many broken marriages.

"It would be nice if the world got back to the core of marriage," Letson said. "I don't think people realize that anymore. They need to go back to the basics that marriage is forever."