President Joe Biden said the United States and other developed nations bear much of the responsibility for climate change during an address at COP26 on Nov. 1, 2021, in Glasgow, Scotland.

GLASGOW, Scotland - In a markedly more humble tone for a U.S. leader, President Joe Biden acknowledged at a U.N. summit Monday that the United States and other energy-gulping developed nations bear much of the responsibility for climate change, and said actions taken this decade to contain global warming will be decisive in preventing future generations from suffering.

"None of us can escape the worst that is yet to come if we fail to seize this moment," Biden declared.

The president treated the already visible crisis for the planet — flooding, volatile weather, droughts and wildfires — as a unique opportunity to reinvent the global economy. Standing before world leaders gathered in Scotland, he sought to portray the enormous costs of limiting emissions from coal, oil and natural gas as a chance to create jobs by transitioning to renewable energy and electric automobiles.

Yet he also apologized for former President Donald Trump's decision to leave the Paris Agreement and the role the U.S. and other wealthy countries played in contributing to climate change.

"Those of us who are responsible for much of the deforestation and all of the problems we have so far," Biden said, have "overwhelming obligations" to the poorer nations that account for few of the emissions yet are paying a price as the planet has grown hotter.

As for Trump's action, Biden said: "I shouldn’t apologize, but I do apologize for the fact the United States, the last administration, pulled out of the Paris Accords and put us sort of behind the eight ball a little bit."

His words, in seemingly impromptu comments, appeared a break from past comments of many U.S. leaders, who either made little mention of U.S. responsibility for the warming earth or — as Biden himself did on the eve of the climate summit — blamed China as the world's current biggest emitter of climate-wrecking coal and petroleum fumes.

Over history, scientists say, it’s the United States that has pumped out the most climate-damaging pollution of any nation, as coal, diesel and gasoline powered the United States and other developed nations to wealth.

Biden, who briefly closed his eyes at one point during the speeches, used the summit to announce he planned to work with the U.S. Congress to provide $3 billion annually to help poorer countries and communities cope with climate damage, as developing nations increasingly are demanding of established, wealthier economies.

At Glasgow, the magnitude of the moment is crashing head-first into complicated global and domestic politics. The Biden administration is exhorting other nations to make big, fast emissions cuts to stave off the worst scenarios of global warming. But the president is simultaneously fighting to nail down his own climate investments with Congress that would keep the U.S. on track with Biden's own pledges. 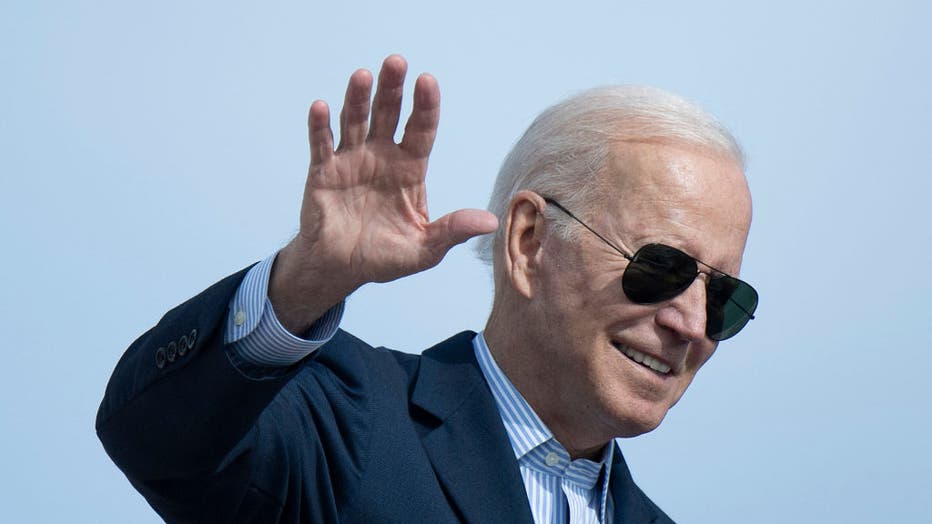 US President Joe Biden waves as he boards Air Force One at Andrews Air Force Base before departing for Italy and the United Kingdom on Oct. 28, 2021, at Joint Base Andrews, Maryland. (Photo by BRENDAN SMIALOWSKI/AFP via Getty Images)

"We’ll demonstrate to the world the United States is not only back at the table, but hopefully leading by the power of our example," Biden said. "I know it hasn’t been the case, and that’s why my administration is working overtime to show that our climate commitment is action, not words."

The summit is often billed as essential to putting into action the landmark 2015 Paris climate accord, which Biden rejoined after becoming president this year. The Trump administration largely withdrew from hands-on diplomacy. Part of Biden's efforts at the climate summit and the gathering of the Group of 20 nations in Rome last weekend was to reestablish the U.S. as a partner.

But Biden and his administration face obstacles in prodding the U.S. and other nations to act fast enough on climate, abroad as at home. In the runup to the climate summit, the administration has tried hard to temper expectations that two weeks of talks involving more than 100 world leaders will produce major breakthroughs.

Rather than a quick fix, "Glasgow is the beginning of this decade race, if you will," Biden's climate envoy, John Kerry, told reporters Sunday.

As the summit opened, the U.S. was still struggling to get some of the world's biggest climate polluters — China, Russia and India — to make stronger pledges to burn far less coal, gas and oil and to move to cleaner energy. China under President Xi Jinping has made firmer commitments to cut back on coal power and make other cuts, but not at the pace that the United States and its allies are asking.

Scientists say massive, fast cuts in fossil fuel pollution over the next several years are essential to having any hope of keeping global warming at or below the limits set in the Paris climate accord.

Trump before his presidency famously accused China of manufacturing climate change, and Trump's administration invariably pointed to China as the top climate offender in justifying its rollbacks of U.S. climate measures.

Biden, too, said he was disappointed that the Group of 20 summit in Rome before the Glasgow gathering failed to nail down stronger promises on climate.

The Biden administration on Monday also released its strategy for transforming the U.S. into an entirely clean energy nation by 2050.

The long-term plan, filed in compliance with the Paris agreement, would increasingly run the world's largest economy on wind, solar and other clean energy. More Americans would zip around in electric vehicles and on mass transit. And state-of-the-art technology and wide open spaces carefully preserved could soak up carbon dioxide from the air.

As with much of Biden's climate promises, fulfillment of the long-term strategy depends in part on lawmakers and American voters, both blocs that are now sharply divided.

U.S. national security adviser Jake Sullivan told reporters traveling with the president that climate change should not viewed as a rivalry between the U.S. and China, as China, the world’s second largest economy, could act on its own.

"Nothing about the nature of the relationship between the U.S. and China, structurally or otherwise, impedes or stands in the way of them doing their part," Sullivan said.