The Washington Commanders continued their hot streak on Sunday beating the Houston Texans 23-10. FOX 5's David Kaplan enjoyed the game with some fans at a watch party at Taffer's Tavern in D.C., and has a look back at the exciting win!

HOUSTON - Taylor Heinicke threw for 191 yards, Kendall Fuller returned an interception for a touchdown, and the Washington Commanders rolled to a 23-10 win over the hapless Houston Texans on Sunday.

Heinicke, who started a fifth straight game will continue starting moving forward, had another solid performance to help the Commanders (6-5) build on last week’s victory over Philadelphia and win their fifth of six.

Davis Mills threw two interceptions and Houston mustered a season-low 148 yards of offense as the Texans (1-8-1) lost their fifth straight and remained the NFL’s only one-win team.

Washington led 20-0 at halftime behind Fuller’s pick-6, a TD run by Curtis Samuel and a historically bad first half by Houston’s offense. 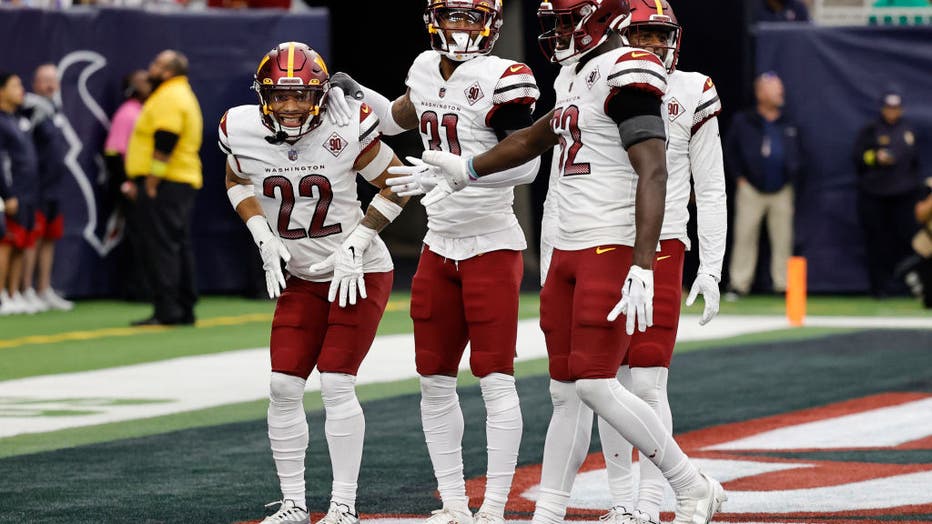 HOUSTON, TEXAS - NOVEMBER 20: Darrick Forrest #22 of the Washington Commanders celebrates an interception with teammates in the fourth quarter of a game against the Houston Texans at NRG Stadium on November 20, 2022 in Houston, Texas. (Photo by Bob L

It was the fewest yards by a team in a half since the Raiders had minus-12 in a win over the Broncos in 2015, a terrible performance even by the standards of this struggling team. Mills had minus-1 yard passing in the first half as he was sacked three times before the break.

The Commanders scored only a field goal after halftime, but their dominant first half was plenty. 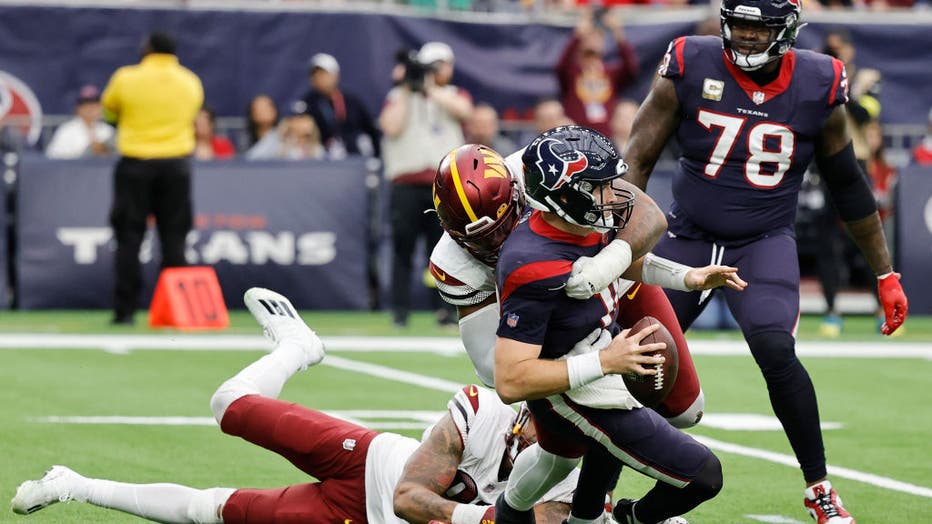 HOUSTON, TEXAS - NOVEMBER 20: Davis Mills #10 of the Houston Texans gets sacked by Jonathan Allen #93 of the Washington Commanders in the third quarter at NRG Stadium on November 20, 2022 in Houston, Texas. (Photo by Bob Levey/Getty Images)

The crowd had so many Commanders fans that chants of "defense, defense" could be heard on a couple of possessions when Houston had the ball. About the only reactions from Texans fans were boos, except for the cheers that came when third baseman Alex Bregman of the World Series champion Houston Astros was shown on the big screens in the first half.

Montez Sweat and Jonathan Allen had two sacks apiece and combined for six quarterback hits to lead a Washington defense that hurried and harassed Mills all day.

Houston rookie Dameon Pierce, who entered the game ranked fifth in the NFL with 772 yards rushing, had 10 carries for a season-low 8 yards.

The Commanders took an early lead when Fuller stepped in front of a pass intended for Brandin Cooks, grabbed the ball and returned it 37 yards to the end zone on Houston’s second offensive play. 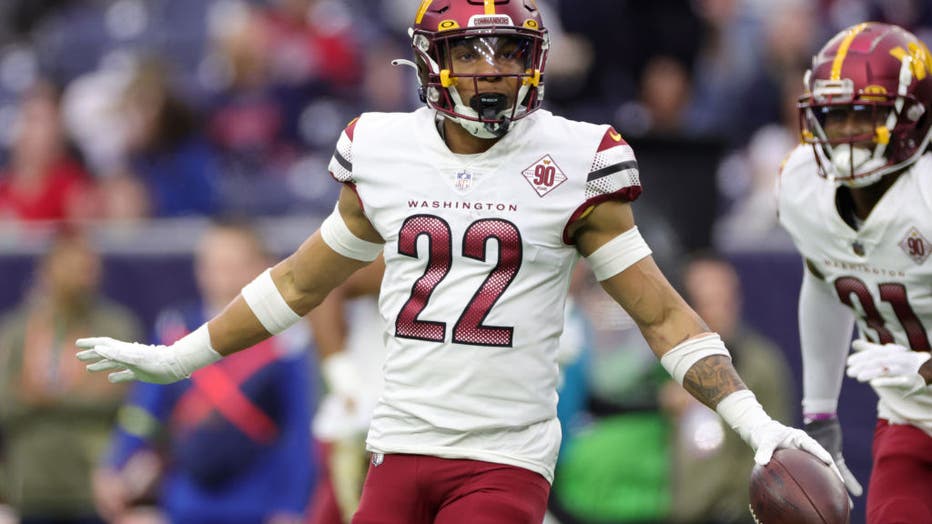 HOUSTON, TEXAS - NOVEMBER 20: Darrick Forrest #22 of the Washington Commanders reacts after an interception in the fourth quarter of a game against the Houston Texans at NRG Stadium on November 20, 2022 in Houston, Texas. (Photo by Carmen Mandato/Get

Washington made it 14-0 when Samuel scored on a 10-yard run early in the second quarter.

The Texans finally found some offense on their first drive of the third quarter when Cooks grabbed a 41-yard reception. Mills scrambled for 4 yards on fourth-and-3 from the 15 to keep that drive going.

Rookie John Ridgeway got an unnecessary roughness penalty for upending Pierce and throwing him to the ground after a run on the next play to give Houston a first down at the 5. But the Texans couldn’t do anything after that and settled for a field goal to make it 20-3 after Mills was sacked on third down.

Mills’ second interception came in the fourth quarter when Benjamin St-Juste made a diving catch on a long throw to give Washington the ball on its 3. 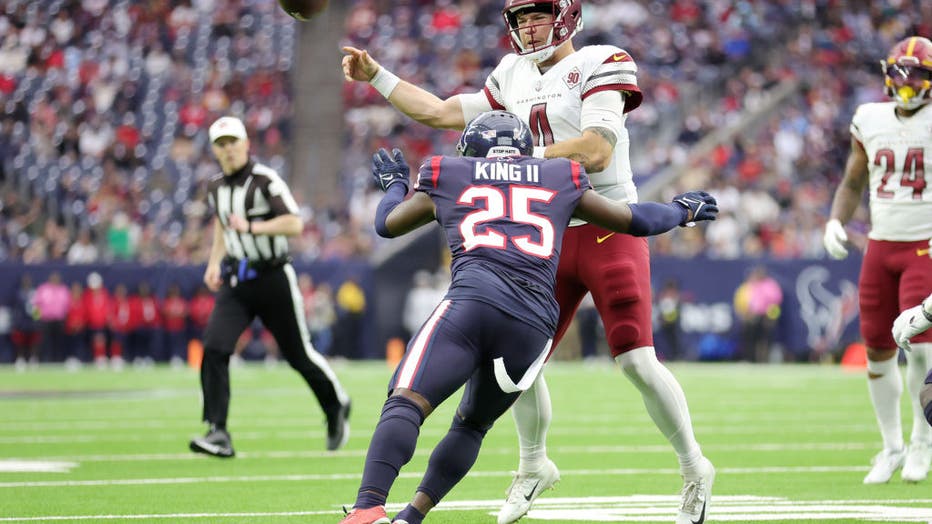 HOUSTON, TEXAS - NOVEMBER 20: Taylor Heinicke #4 of the Washington Commanders passes as he takes a hit from Desmond King II #25 of the Houston Texans in the second quarter at NRG Stadium on November 20, 2022 in Houston, Texas. (Photo by Carmen Mandat

Mills scrambled for a 4-yard touchdown with about three minutes left to cut the lead to 23-10.

Next up for the Commanders, they will be back at FedEx Field next Sunday to take on the Atlanta Falcons.